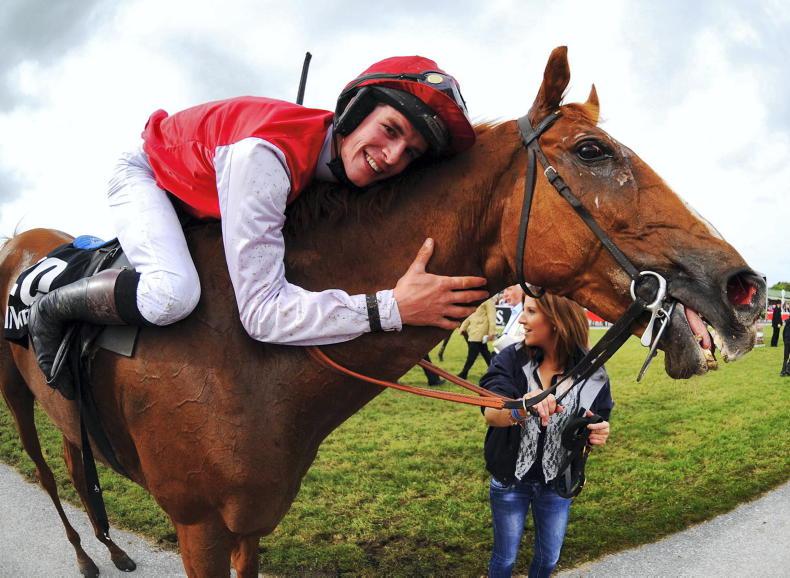 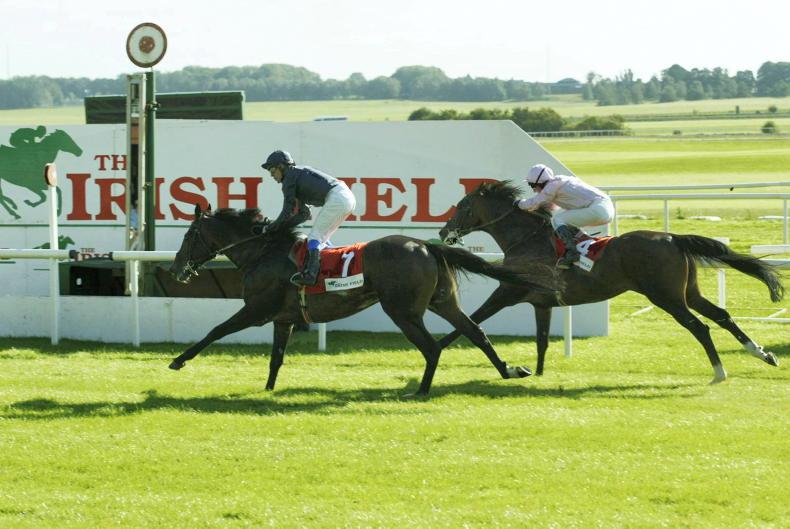 Yeats and Kieren Fallon defeating Scorpion in the Group 1 The Irish Field St. Leger at the Curragh \ Peter Mooney 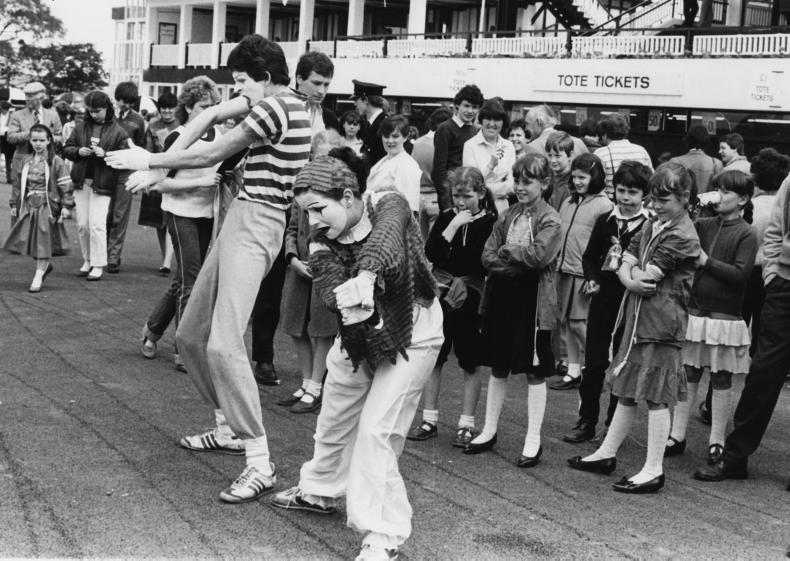 IT is a race that he has long held dear to his heart, and the Guinness Kerry National yet again provided Eric McNamara with a victory to cherish, as Faltering Fullback came back from the wilderness to lead home a one-two for the trainer.

As he attempted to win this race for the third time, McNamara was initially due to have two runners in the race, and one of these was the 2007 and 2008 hero Ponmeoath. Faltering Fullback was only second reserve, and he got into the field when Save My Blushes was taken out of the race on Wednesday morning.

This allowed Danny Mullins to pick up a memorable chance ride, while the CCK Syndicate-owned winner recaptured his former sparkle. Three years ago Faltering Fullback made a winning start over fences in a beginners’ chase at this meeting. He was without a win since then, and a number of unplaced runs coming into this event saw him line up as the joint 33/1 outsider.

Under a patient Mullins, Faltering Fullback became the longest-priced winner (paid almost 90/1 on the tote) in the history of the Kerry National. As the runners turned for home, Faltering Fullback poached a lead of several lengths which never looked likely to be bridged by the chasing group.

Ultimately it was his stablemate Questions Answered who emerged to give chase, but the leader would not be denied. After clearing the last in good style, Faltering Fullback stayed on well to win by five and a half lengths. Start Me Up, who still looked a threat at the second last, was a further four and three-quarters of a length away in third.

A delighted McNamara said: “He looked like being a good horse when he won over fences here in September 2009, but for some reason he just totally lost his way. Emmet [trainer’s son] rode him the last day and felt that the trip was too short for him.

“Obviously, this longer trip was a help, but I’d say the big factor today was that he had 9st 12lb on his back.

“I really did fancy Questions Answered and he has run well, but Faltering Fullback came back to be the horse he once promised to be. Sean Curran, who is involved with Ponmeoath, is involved with this horse, along with Michael Fitsimmons. They have been so patient and have been marvellous supporters of mine.”

The trainer concluded: “I was delighted that Danny was able to ride the horse, and he gave him a fantastic ride. His father Tony has done me a turn in the past, so I was happy to repay the favour today.”

This was Danny Mullins’ biggest winner to date over jumps, and afterwards the 20-year-old reflected: “Eric told me to ride the horse wherever he was happy, and I spoke to Emmet as well. He said he thought the horse ran quite well at Killarney last time and that he was coming back to form. He was right.”

[Since that win Danny Mullins has gone on to become of the leading riders in Ireland. He rode his first Grade 1 winner for Gordon Elliott on Mount Benbulben in April 2013, and has been especially successful when teaming up with his uncle Willie.

Gavin Cromwell has saddled Flooring Porter to win a couple of Grade 1 hurdle races with Danny in the saddle, while Philip Fenton gave the rider the leg up for two more Grade 1 victories with The Tullow Tank. In the USA, Danny was on Mr Hot Stuff when winning a Grade 1 for trainer Jack Fisher]

THE Irish Field St Leger victory that has threatened to come his way for some time finally arrived for Yeats, as Aidan O’Brien’s top stayer produced a most tenacious display to foil his stablemate Scorpion.

The six-year-old had met with defeat in the last two renewals of this race, and for much of the straight it seemed as though he would once again have to settle for a minor role. However, the dual Ascot Gold Cup winner showed that he has courage in abundance to go with his undoubted class, and gave his trainer a first success in one of only two domestic Group 1s to have thus far eluded him.

Off the track since recording the third Group 1 of his career at Royal Ascot, the Sadler’s Wells horse was returned the 4/7 favourite under Kieren Fallon, with fellow Coronation Cup winner Scorpion the clear second best in the market at 7/2.

There was still several lengths between that pair with a quarter of a mile to run, but the gap started to close as Yeats gave his all to close down the leader. Scorpion could do no more when joined inside the distance, and eventually Yeats battled his way to the front to win by half a length.

There was a further four and a half lengths back to the sole three-year-old in the field, Mores Wells.

John Magnier, whose wife Sue owns the winner with Diane Nagle, commented: “He’s an unbelievable horse. He’s already won two Ascot Gold Cup and he deserved to win this race. Scorpion is a serious horse in his own right, and today says a lot about the two horses.”

[Yeats went on to win the Gold Cup at Ascot on four occasions, also adding the Group 1 Prix Royal Oak to his tally of 15 wins. He has stood at Coolmore and Castle Hyde Studs since he retired, and his Grade 1 or A National Hunt winners are Flooring Porter (three times), Tudor City (twice), Chantry House (twice), Shattered Love (twice), Conflated, Longhouse Poet, Figuero (in France), Augusta Kate and Capivari (in France).

Scorpion has variously stood at Castle Hyde Stud, Shade Oaks Stud in England, and this season at Old Road Stud.

He is the sire of Grade 1 winners Might Bite (four times), Riders Onthe Storm, Scorpiancer (in the USA) and Don’t Touch It]

Sale of the Phoenix Park

THE all-clear was given in the High Court last Monday for the purchase of the Phoenix Park racecourse and, although time is at a premium, racing should resume on Easter Saturday, April 2nd.

A consortium headed by Vincent O’Brien and Robert Sangster, plus the trainer’s son-in-law John Magnier and Frank Sinatra’s ex-manager Danny Schwartz, have bought the course for £2 million from the liquidator of Track Investments, the Gallagher company formed to modernise the Phoenix Park after it was acquired from the original shareholders.

Gallagher interests successfully bid £2.5 million and, to date, a £1 million down payment has been made. Obviously, the original shareholders will get first priority and, with £1.5 million owing, this leaves £500,000 to the other creditors. Also, it will be recalled that O’Brien and Sangster had a 24% stake in Track Investments.

At the time of the Gallagher crash last spring, the new track was only a few weeks away from opening, and Track Investments had already spent £2.5 million on the modernisation. This included a sunken paddock and weighing room in front of the stands.

However, the new owners have estimated that a further £1 million-plus will have to be expended before opening day.

With such a large capital expenditure, it comes as no surprise to find Vincent O’Brien indicating that “none of the investors expect to make a profit from the venture, and will be dependent upon the improvements to attract the support of the public and make the entire facility pay its way.”

He also warned that the economic outlook for the track was bleak if recent attendance figures could not be significantly improved.