Burnt Ash won in the absence of her breeder, David Mitchell, and her owner, Mitchell’s partner Elizabeth ‘Hammy’ Hamilton. 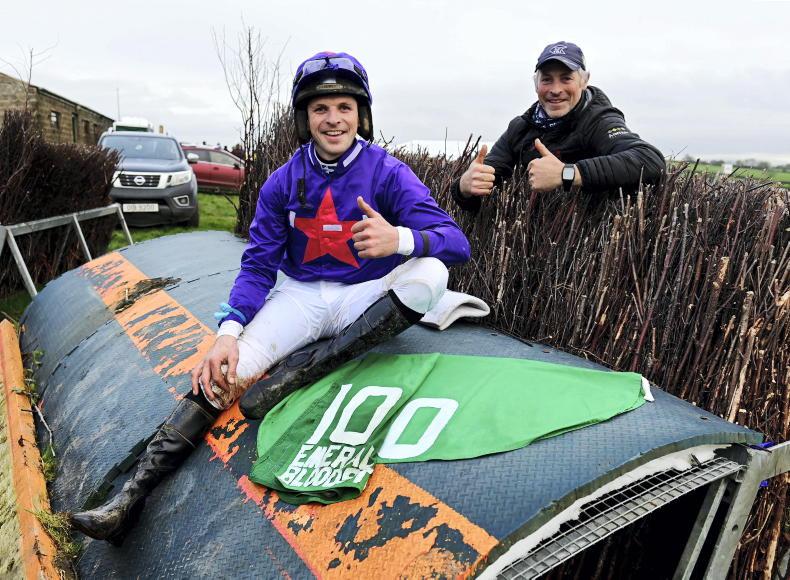 Unfortunately, the six-year-old Scorpion grey, who is trained by the rider’s brother Stuart, won in the absence of her breeder, David Mitchell, and her owner, Mitchell’s partner Elizabeth ‘Hammy’ Hamilton.

The couple would have loved to have seen Ben reach this milestone on one of their horses having watched him ride throughout his eventing career.

Burnt Ash is the second of just three recorded foals out of the Moscow Society mare Ardnavalley, the first being the 2014 Getaway gelding Chalky White who won a hurdle and a chase before being fatally injured on the track early this year. Ardnavalley is a half-sister to the four-time winning Tikkanen gelding Tikkanen Express and to two winning mares once trained by Stuart Crawford, viz A Touch Of Sparkle (by Golan) and Indy Island (by Indian Danehill).

Two other Co Down riders were on the mark at Saturday’s Co Down Hunt meeting with Deckie Lavery getting the newcomer Gaelic Park up late to beat the Paul McAleese-trained Hymac by a short-head in the Tattersalls NH five-year-old geldings’ maiden.

The brown son of Ocovango, who is trained in Downpatrick by Patrick Turley for his Co Limerick breeder, Michael Conaghan, is a half-brother to four track winners headed by the Yeats gelding, Chantry House.

For the second weekend in a row, Noel McParlan returned to the No 1 spot on the Liam Lennon-trained eight-year-old Winged Love gelding School Lane who, this time, carried the colours of his owner, Caoimhe O’Hare to victory in the Dennison JCB winners of two.

Another Winged Love gelding, John Hegarty’s seven-year-old Winged Leader, shared the spoils in the Albert Bartlett open while his stable-companion, the 12-year-old Presenting gelding Marinero brought up a weekend double for their trainer, David Christie, when landing the ladies’ open at Quakerstown on Sunday.