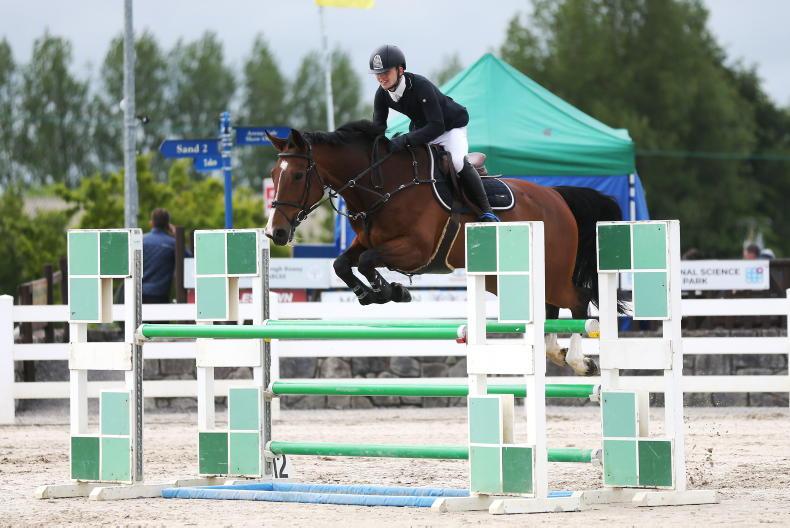 A TOTAL of 33 combinations lined out in a bid to take home the winner’s share of the €3,000 on offer in the 1.10m Derravarra Championship on the show’s final day. As expected, this class came down to the wire with seven combinations delivering double clears.

Leading the charge was amateur rider Colm Fitzpatrick (AA) when he lodged the winning clear in 33.31 aboard Maretto Flight. No stranger to success at this level, Aileen McDermott (AA) piloted her own Amber Balou to a clear in 33.45 for second. Accounting for third place was Kirsten Fynes and Oscars Peaches and Cream, who stopped the clock in 35.89.

Recently qualified for the amateurs in Dublin, Lorraine MacGuinness (A) added to her record as she took fourth place with Horseware Kinmar Night in 36.30.

Young rider Jack Geaney and the seven-year-old Kilmullen Baloutinus took fifth, clear in 37.50, ahead of junior rider Sunnibhe Stassin and RNH Factor One, in 38.50.

Winner of the 1.20m Midland Classic Championship and taking home the lion’s share of the €3,000, prize money was Ger O’Neill. Riding Brian Hutchinson’s seven-year-old SVS Zarocco, the Kilkenny rider was clear in 30.07.

Limerick’s Robyn Moran made another appearance in the line-up, this time taking the runner-up spot with Gina Heaps’s Carrowgar Je T’Aime Max, clear in 30.09.

Slotting into third place was Anthony O’Regan who delivered a clear with Rachel Moloney’s seven-year-old Helsinki, in 31.46.

Young rider Seamus Hughes Kennedy took fourth place with Imandouw when he stopped the clock in 31.49. A clear from Nicholas Butler and Pacco Lion in 31.87 ensured him fifth place, ahead of Timmy Keogh and Jaguar Blue, clear in 32.54.