Title: NEWS: Bloomfield Breagura back for more in Balmoral

Margie McLoone rounds up the championships from the 2022 Balmoral Show 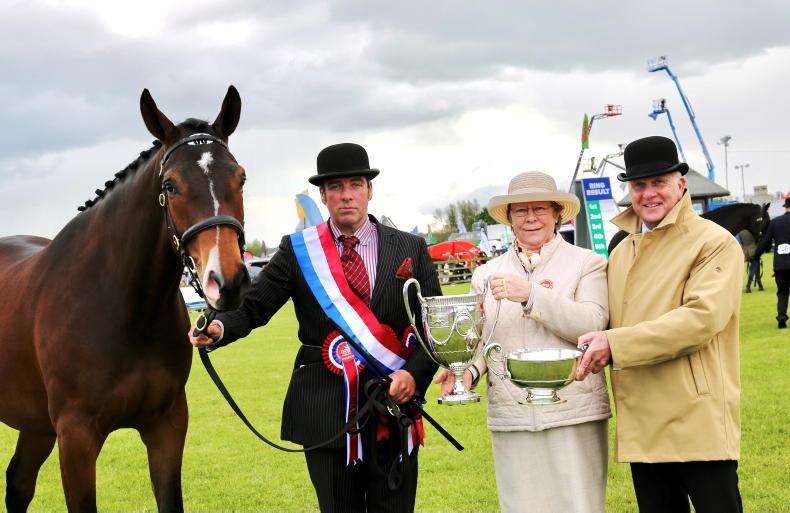 THE Royal Ulster Agricultural Society’s annual Balmoral Show, supported by Ulster Bank, returned to its usual date in the calendar this week when, at times over the first three days, it was bitterly cold around the horse rings.

A championship double looked on the cards when Bradbury partnered last year’s supreme hunter champion, Tierney’s Bloomfield Distinction, to win the older heavyweight class ahead of Shane McKenna on his own Mongorry Cormac. However, when it came to the weight championship in the Main Arena on Thursday afternoon, their positions were reversed.

When it came to the supreme championship, the judges ignored Mongorry Cormac in favour of their lightweight and four-year-old champion, Ballarin Shanalin, with the middleweight champion, My Diamond Solitaire, ridden by Jamie Smyth, for Karen King, standing reserve supreme. Ballarin Shanalin, who was ridden and produced for Sue Tennant by Co Kildare’s Nicola Perrin, is a bay gelding by Radolin, while Gone To Ground, is a six-year-old gelding by Kings Master.

There would have been ‘walkovers’ in both weight divisions of the broodmare classes early on Wednesday morning had these not been supported by Co Wexford’s John Roche who once again won the championship but, this time, with his 12-year-old Kings Master mare, Assagart Mistress.

There was certainly no paucity of entries when it came to the Connemara pony division on Thursday and the standard was very high as well.

In the morning, when those competing in the flat classes had much the better of the weather, Sadhbh O’Connor won the ridden championship on board her mother Aoife’s 11-year-old Slackport Prince gelding Ballylee Castle Prince.

While the racing world rightly lauded the victory of the 15-year-old Ballyboker Bridge in the La Touche Cup at the recent Punchestown Festival, he is but a pup compared to Claire Devlin’s 25-year-old Ferdia gelding Blackwood Fernando who, under the owner’s daughter Alicia Devlin Byrne, not only won the Connemara working hunter championship on Thursday afternoon but the Clifden high performance qualifier as well.

It was dry but very windy yesterday (Friday) morning for the ‘Star of the Future’ performance horse championships for which those catalogued had to qualify. The five-year-old honours went to Carol Gee’s Fernhill Count On Me, a Chacoa gelding ridden by Luca Bortolamei, while Hannah Blakely partnered Jane Allen-Collins’s Colestus mare, Lougherne Kingfisher, to victory in the six to eight-year-old championship.

Full reports on all the equestrian classes at Balmoral Show 2022 will be carried in next week’s issue of the Irish Horse World along with detailed results.