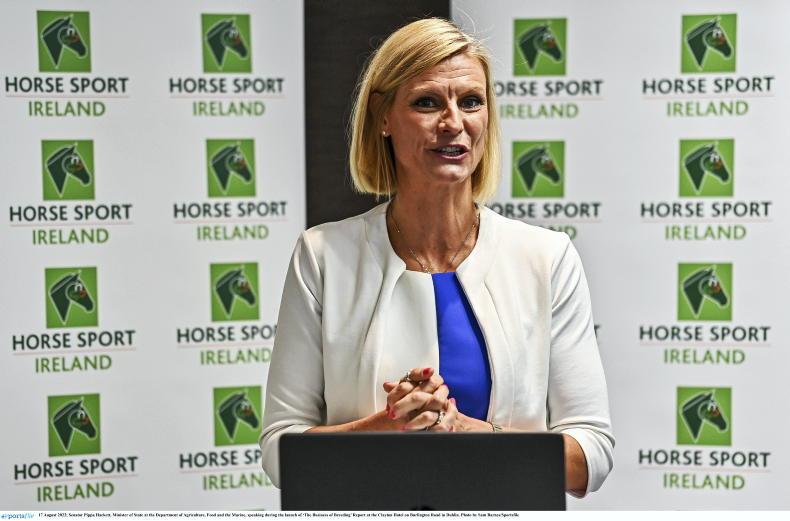 Senator Pippa Hackett (Greens), Minister of State at the Department of Agriculture, Food and the Marine, speaking during the launch of Horse Sport Ireland's ‘The Business of Breeding’ Report at the Clayton Hotel on Burlington Road in Dublin \ Sam Barnes/Sportsfile

A NEW report commissioned by Horse Sport Ireland sets out a comprehensive case for a multi-million euro increase in TAMS funding for the Irish equine sector. IFAC carried out independent research for HSI’s ‘The Business of Breeding’ report, launched on Wednesday by Minister Senator Pippa Hackett (Greens).

HSI CEO Denis Duggan said: “Horse Sport Ireland commissioned this research to estimate the likely demand for any on-farm investment scheme in the sport horse sector. There’s over 9,000 active breeders in the sport horse sector, who registered a foal in the last five years. Over the next three years, the Irish sport horse industry will invest €342 million in on-farm improvements - significant and large scale investment in equine premises all over the country with the potential to support many other jobs nationwide.”

“We wanted to map the trends in breeding – sport horse breeding has changed massively in Ireland since the 1970s. It is all about the breeders, the type of investment they make,” she added.

Some 52% were aged 51-64 and signficiantly, 84% have less than 10 horses while 52% have no other farming enterprise such as beef, sheep or dairy. Some 97% of that 52% had not heard of TAMS while 85% had limited understanding of the Basic Payment Scheme (BPS).

The market for horses and ponies remains very buoyant with 87% trade within ROI, 75% to UK and 69% overseas.

Horsewoman and organic farmer, Minister of State Pippa Hackett, said: “This country is synonymous with horses and the horse is a cornerstone of Irish culture, attracting people from all over the world. Globally renowned, Dublin Horse Show showcases Irish-breds and is a fantastic showcase for trade. Horses play a significant role in supporting rural Ireland and my Department recognises this. We are the most densely populated sport horse country in Europe, [the Irish sport horse industry is] worth over €800 million per annum and supports over 14,000 full time jobs. Breeding accounts for €300 million into the economy every year, it is the largest sector [of the Irish sport horse industry].

“We - Minister Charlie McConalogue, Minister Martin Heydon and myself - are including TAMS in the next scheme submission, uniquely we share the same view on this policy and that’s a very positive sign. My Department is working on what the scheme will look like and today’s report will be very useful in that regard, for the EU approval for 2023-2027 tranche of funding. Over the next month or so, we will submit all the requirements to the EU and by the end of the year, we might know where we stand and know what’s available. It would be administered within the DAFM,” concluded Minister Hackett.