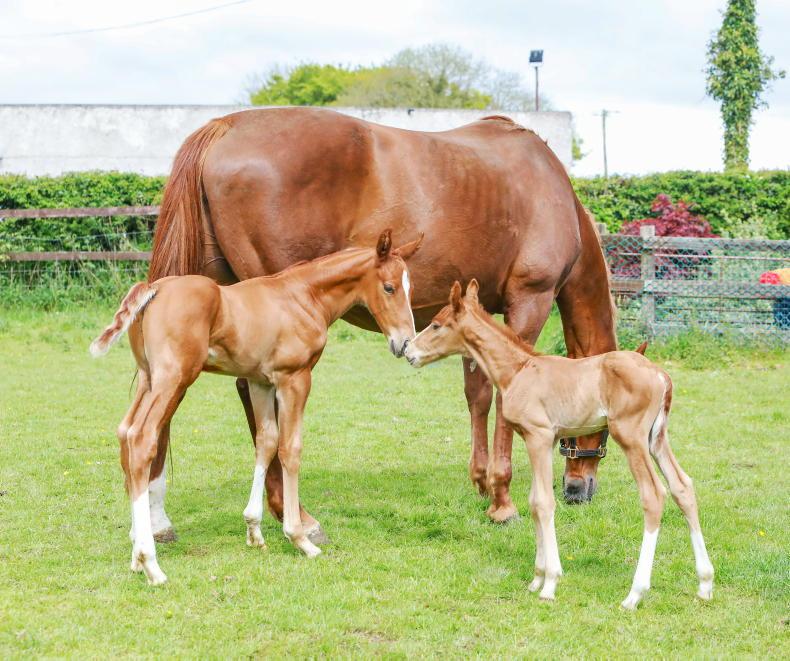 THE Rothwells from Tinahely in Co Wicklow were notable absentees from Balmoral this week while they tended to their ‘surprise package’ of twin foals which were born over the May Bank Holiday weekend.

The chesnut colts – the family’s first ever set of live foals –made their appearance a few weeks after the actual due date of their dam, the 2012 Breeders’ Championship winning mare, Greenhall Dot.

The daughter of Cruising – who is out of another famous Dublin winner Greenhall Cailin Deas – was successfully covered in 2021 by the Registered Irish Draught Dunsandle Diamond. As time went on the Rothwells presumed she was carrying a big single foal, so it came as a bit of a shock when they discovered she was about to deliver twins.

“It was the middle of the night and we helped her with one foal. I was only commenting on how nice he was when we saw there was a second one on the way,” commented Derry Rothwell. “I was hoping for a filly to keep the traditional lines – especially with the performance pedigree of the sire – but two colts were a great surprise,” he added.

Since being born the smaller foal has been getting round-the-clock care from Derry, along with his wife Emily and daughters Sharon and Mary.

Greenhall Dot has produced several foals to date. She also has a yearling colt by Dunsandle Diamond, in addition to the Ars Vivendi mare Greenhall Vivendi Cruz, who was shown with her dam for the 2012 Dublin win.

As one of the most successful showing families in Ireland, the Rothwells have countless other wins to their name. They also won the Breeders’ title in 2011 with Millennium Cruise. Remarkably this mare won the same accolade when shown with her dam Greenhall Cailin Deas in 1998.

There have also been multiple wins and placings at Dublin with the likes of Greenhall Wishing Well, hunter mare champion and reserve supreme hunter at the Dublin Horse Show in 2016.

This direct family line now continues through her three-year-old Island Commander filly Greenhall Emerald Isle who missed an outing at Balmoral this week but is expected to be shown in some young horse classes later in the season.

The Rothwells are also hoping to have a few mare and foal combinations ready for the upcoming qualifiers for the Breeders’ Championship which returns to the RDS for the first time since 2019. These get underway at the Armagh County Show on June 11th, followed by Athlone Show (June 19th), Charleville Show (June 26th) and West Clare on July 2nd.