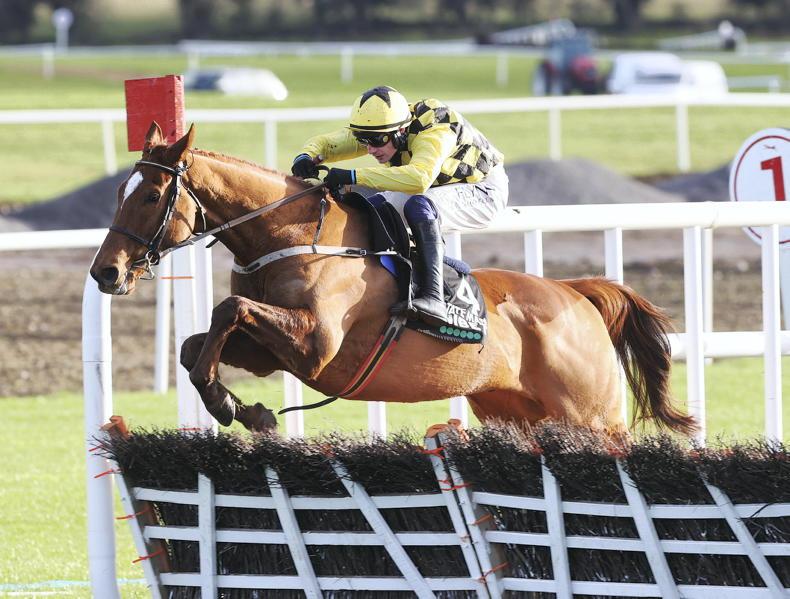 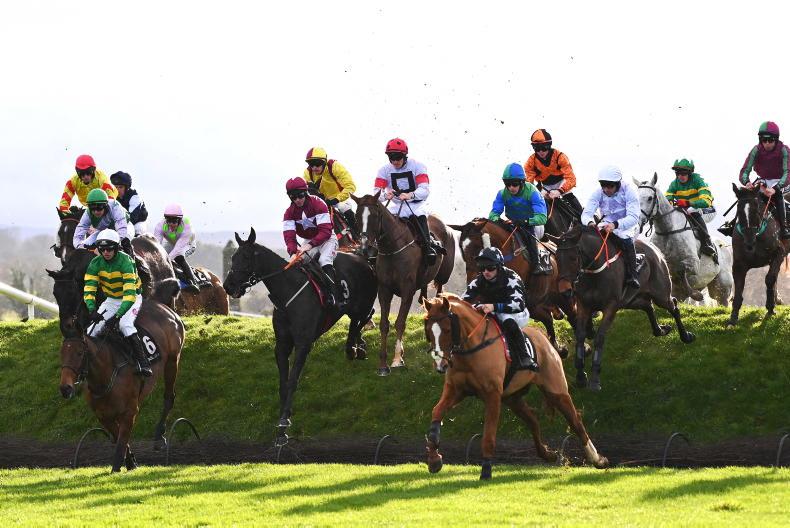 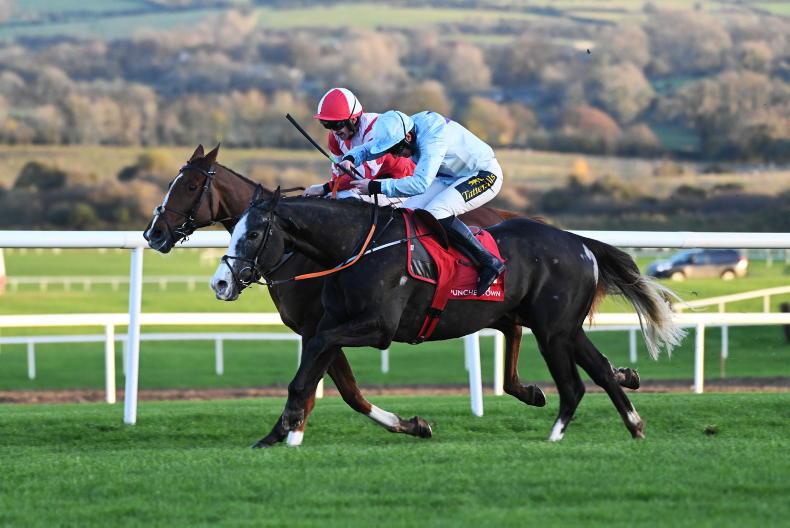 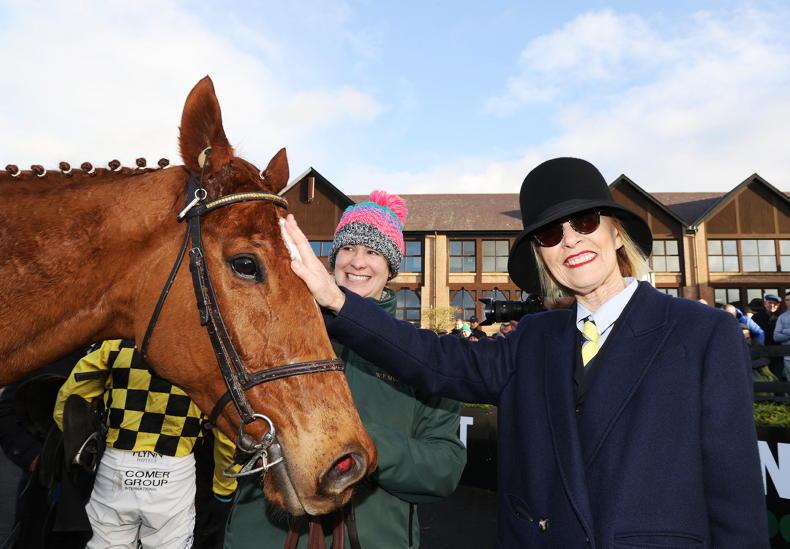 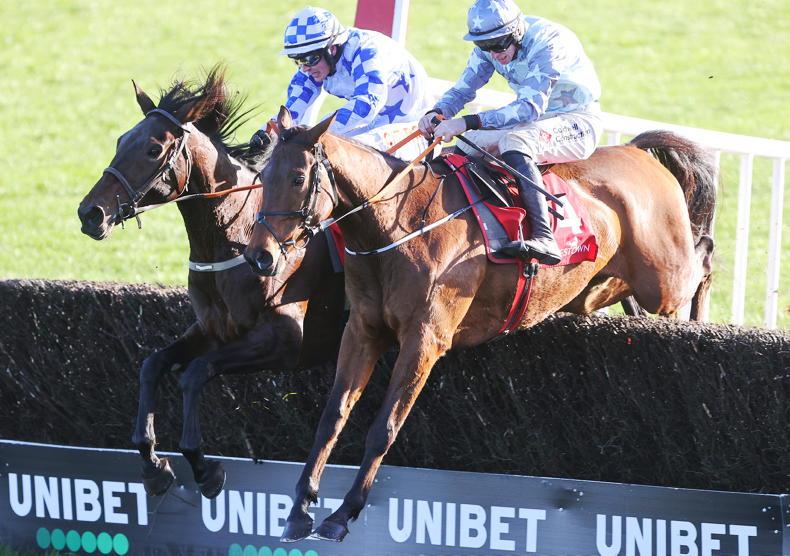 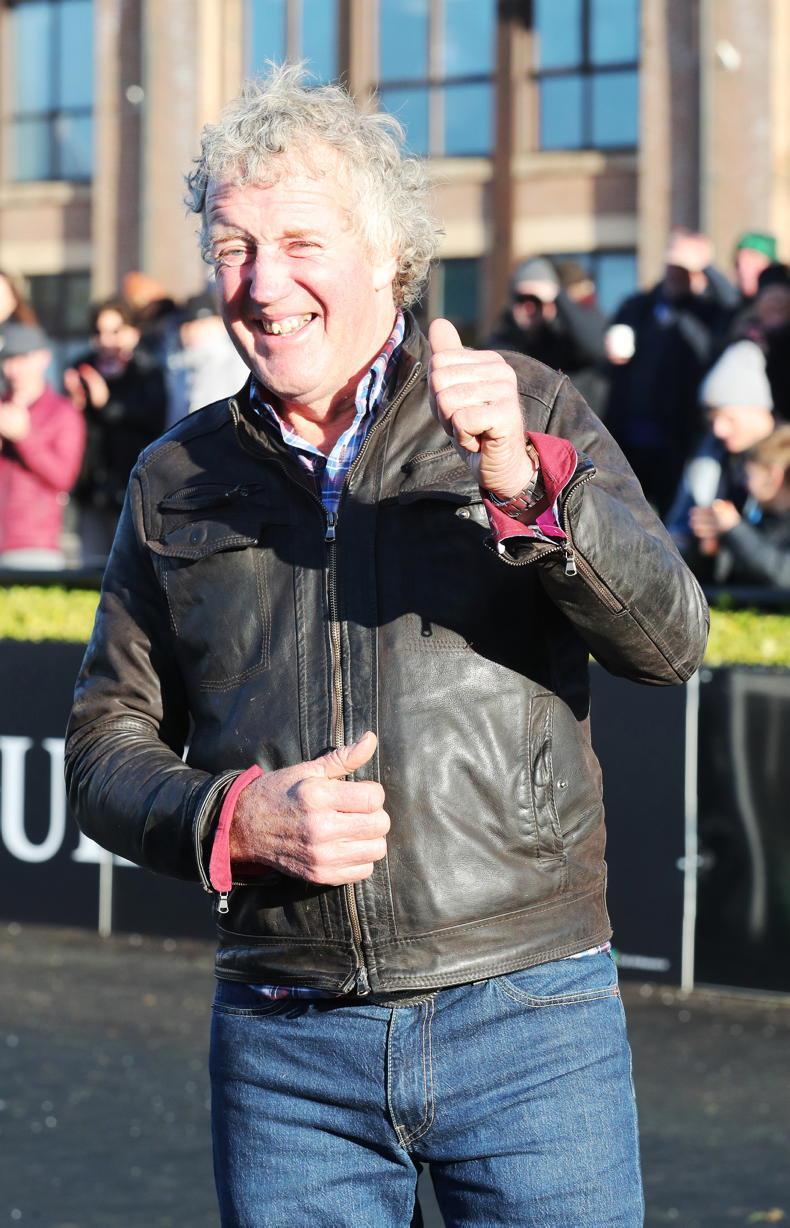 STATE Man took his first step on the road to next March’s Champion Hurdle with a convincing display in the Grade 1 Unibet Morgiana Hurdle, run in memory of Michael Rafferty @AnaglogsDaughtr) at Punchestown last Sunday.

The Willie Mullins-trained gelding went to post a well supported 4/9 favourite in the four-runner contest and it proved a straight-forward task for the Joe Donnelly-owned five-year-old.

Paul Townend tracked stablemate Saldier over the extended two miles before kicking for home turning into the straight. The Doctor Dino gelding went on before the last and the result never looked in doubt as he posted a four-length success over another of the Mullins trio, Sharjah.

“I was delighted with that, it was a nice start to the season,” said Mullins. “The race worked out perfectly for him and Paul asked him a nice question down over the last two hurdles.

“Sharjah had been working well at home and he put him to bed when Paul asked him. We wanted to get a good run into him. If he’s going to go down the Champion Hurdle route he needs to be asked those questions.

“He’s probably not Champion Hurdle class jumping-wise yet but that will come in a bigger field with more competition. I think there is plenty of improvement left in him.

“Looking at that I don’t think Henry (de Bromhead), Michael Buckley or Nicky Henderson will be too worried but we’re going to improve.

“We’ll try and build him up slowly and have enough experience by the time we get to Cheltenham.

“I’m looking at Christmas and the Dublin Racing Festival with him. We’ll keep him going, get experience into him and harden him up.”

The Oscar mare was to the fore throughout in the two-mile-six contest and stuck to her guns gamely down the straight when headed by Minella Crooner.

She found a bit more close home, for Danny Mullins, to stick her head out and claim a head victory.

“That’s mighty, it’s the best win she’s ever had. We knew that she was in great form,” said Murphy.

“She has to be out in front, if she’s in behind she doesn’t want to know anything about it.

“I’ve been milking cows all my life and I’ve always had love for horses. I’m wicked lucky to have a good mare like her.

“It was great to be able to come up today and run in a Grade 2, for me to breed her and train her at home. I ride her out every morning.

Elliott gets double in the stewards’ room

GORDON Elliott bagged a first and last race double after two tight finishes but the bumper victory came in the stewards’ room.

Delta Work went to post a 4/6 shot in the opening Pigsback.com Risk Of Thunder Chase over the banks and had to work hard to secure the spoils.

Jack Kennedy’s mount warmed to his task as the race went on and got to the lead on the run-in in the three-miler.

Course specialist Singing Banjo rallied gamely close home and only a short-head separated the pair at the line.

“Jack said it took him a while to get going, he said he was very sticky early until he got down over the double down the bottom,” said Elliott.

“It’s a bit trickier here than it is in Cheltenham. It’s hard to place a horse like him now so we said we’d see how we took to this. It’s job done.

“He kind of pulled up from the last home, he pricked his ears and didn’t do much. He used to wear cheekpieces over fences and I wouldn’t be surprised if they were back on him again at some stage.

“He’ll probably have one run between now and Cheltenham all being well.”

There was only a head between Lecky Watson and Cato Capone after a cracking finish to the finale but the former was demoted after bumping his rival a few times in the closing stages.

The Jamie Codd-ridden Cato Capone had come to head the front-running favourite Lecky Watson over a furlong from home but his rival got back on top close home.

It didn’t take long for an enquiry to be called though as the first past the post had leaned left into his rival in a driving finish and the placings were eventually reversed.

Elliott trains the 11/10 winner for the McNeill and Stone families and he said: “They are two very good horses. My fella is a tough horse and he’s really a jumping horse, he’s a real nice horse.

“It’s never a nice way to get a race but I thought we deserved to get it. He might go over hurdles now.”

THE Joseph O’Brien-trained Nusret made a big impression on his hurdling debut when running out a stylish winner of the John Lynch Carpets 3-Y-O Hurdle.

Daryl Jacob travelled over for one ride on the Simon Munir and Issac Souede-owned colt and it proved a worthwhile trip.

The son of Golden Horn cruised up to challenge before the last in the extended two-mile contest and quickened away on the run-in for a six-length win at odds of 5/2.

Jacob said: “I sat on him in Joseph’s as a two-year-old and I said when I got to the top that he would make a fine jumper. Little did I know then that he was going to end up going jumping.

“He’s always shown a nice attitude to schooling. It was a nice performance, there were some nice horses in that race today. He’s done it very nicely, travelled around great and jumped great.

“Please God that is phase one of hopefully what can be a really nice horse over hurdles.”

Having secured the feature, Willie Mullins and Paul Townend went on to double up when Shewearsitwell came with a late surge to land the Pertemps Network Group Handicap Hurdle. The Shirocco mare didn’t appear to be travelling early, dropping to the rear from the fifth flight, but found her feet late on.

She rattled home on the run-in to nab My Immortal in the shadow of the post for a neck success at odds of 8/1.

The winner was warmly welcomed by members of the Closutton Racing Club and Mullins said of her afterwards: “She stays well and I’d imagine now that she’s qualified we’ll have to have the final as our main aim for the season.

“We’ll have a look at what her likely weight would be in it. It’s very seldom I have a runner in that race and I don’t feel any need to run her again before it.”

SEAN Doyle is another dreaming big after Monbeg Park’s success in the Irish EBF Supporting galabid.com/t21 Auction For Down Syndrome Centre Maiden Hurdle.

The Walk In The Park gelding galloped on strongly in the closing stages of the two-mile-five contest to record a convincing two-and-three-quarter length win over Will Do.

Bryan Cooper sent his mount on turning for home and the 9/4 shot asserted down to the last to seal matters.

“We’ve never had anything like him, he’s very special, and when he jumps a fence we’ll see the best of him,” said Doyle.

“We’re selling men and it’s just by default we still have him. He jumped the last in his four-year-old maiden and sprained his front joint. He couldn’t go to the sales then and we just got left with him.

“(My brothers) Donnchadh and Eamonn have a share in him as well and it’s grand to have him. He’s really one to look forward to. If the barrel runs dry we might have to sell someday but we’ll dream big with him.

“We’ll work back from Cheltenham and we’ll probably go to Naas in January (Grade 1 Lawlors Of Naas Hurdle). That will tell us where to go.”

The Gigginstown gelding tracked the leaders throughout in the two-mile-six contest before jumping up to dispute three from home in the €45,000 event.

Cooper drove his mount into the lead after the second last and the 11/1 shot galloped on strongly on the run-in to repel the challenge of Take All by a length and three quarters.

“We bought him as a two-year-old in France and he’s taken a while. He’s a bit lazy as you can see in his races,” said Meade. “He was going well in Galway and he made a very bad mistake at the third last on very heavy ground and it knocked the bottom out of him. He still ran a very good race that day (fourth on his comeback) and I quietly fancied him each-way .

“I would think he’ll probably run in the Paddy Power at Christmas, I’d imagine that will be his next port of call.”