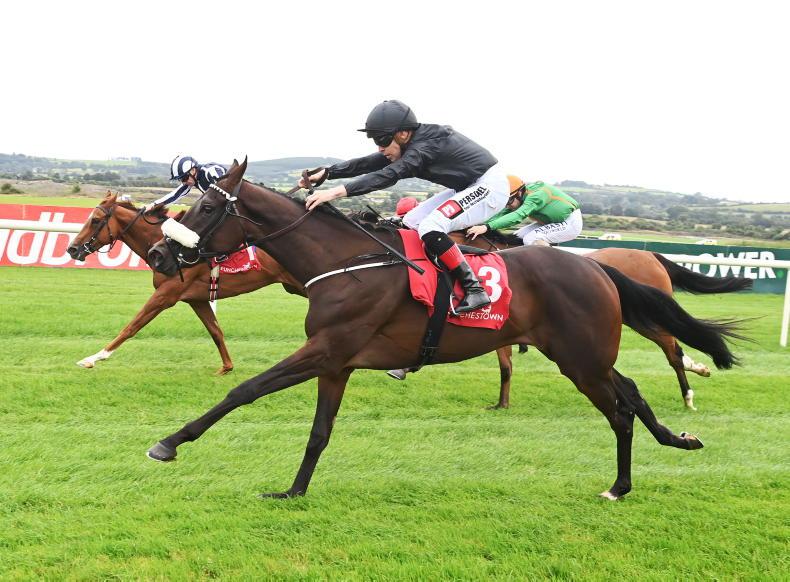 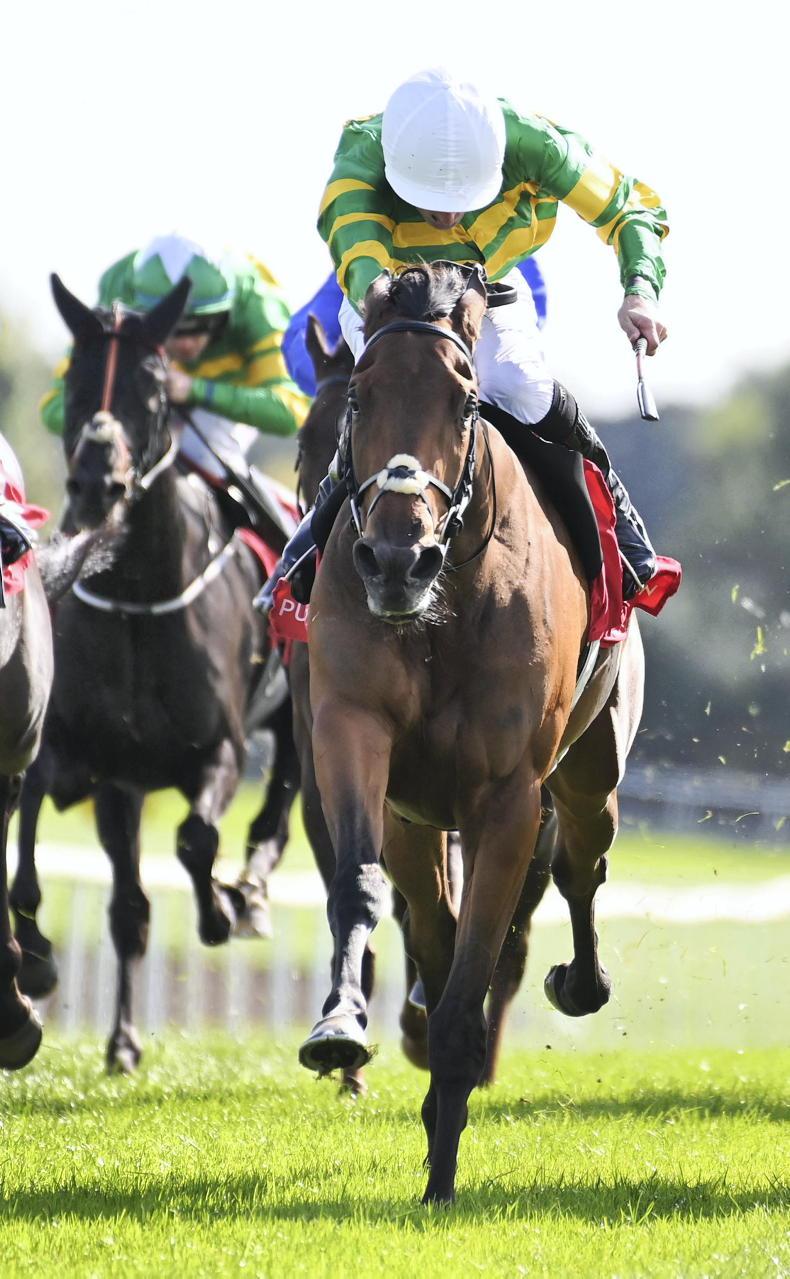 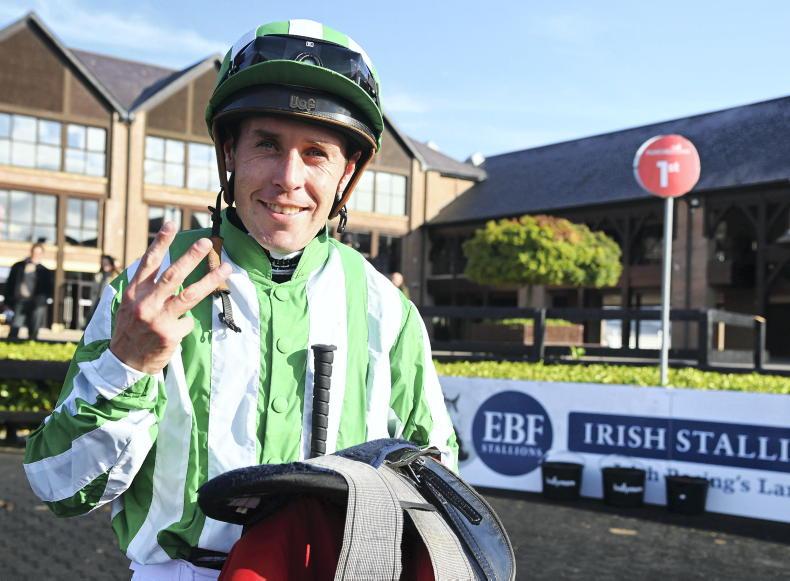 IT was a notable afternoon for Michael O’Callaghan who registered an opening race double with a pair of promising juveniles and it was a landmark one for jockey Leigh Roche as he joined in the brace before securing the second treble of his career.

It began when Gozen delivered on some favourable pre-race reports in the opening Irish Stallion Farms EBF Fillies Maiden.

The 7/2 shot didn’t have things go entirely her way in this seven furlongs contest as she ran a shade keen through the race and was then somewhat green when Roche asked her to go forward in the straight.

However, natural ability shone for the daughter of Kuroshio and she finished out strongly to nail the front-running favourite Basil Martini on the line. The winner is owned by the trainer’s wife Siobhain.

“Eddie Ahern, with a few lads, had her at the breeze-up sales and they liked her a lot.

“She didn’t sell and they sent her to us to see might we be interested in acquiring her and that’s how we ended up with her,” said the trainer.

“She’s a big filly and will improve a lot from this but her work at home suggests that she is definitely a stakes filly. She’s managed to do things wrong and still win.”

It was then the turn of the Vertem Futurity entrant Rothko (14/1) who looked a fine prospect in the Anglesey Lodge Equine Hospital Maiden over a mile.

A graduate of the Tattersalls Ireland Goresbridge Breeze-Up Sale, like Gozen, Rothko looks a horse of considerable potential.

He was going nicely turning for home with plenty to do at this point and he picked up in the manner of a quality colt to cut down Intellotto in the final yards.

“We bought him from Tally-Ho Stud, where we have gotten plenty of good horses from in the past, and he’s a lovely, big, horse who has improved all year,” commented O’Callaghan.

“I think he’s a good horse and he saw out the mile well and he took plenty of pulling up too.”

Our Dickie, a first winner for Claire O’Connell in seven years, brought up Leigh Roche’s treble when scoring at 50/1 in the first division of the 47-65 rated nine-furlong handicap.

The lightly raced three-year-old progressed markedly on the form of his first four outings in first-time cheekpieces to take control of this race inside the final furlong and see off the favourite Every Little Step by a length and a half.

The winner is owned by the Tormey Twomey Heavey Syndicate.

“Joey Tormey bought the horse and he passed away a few weeks ago, he was Conor’s dad and he’d be an uncle of Andrew Lynch,” reported the trainer.

“I must thank Niall McCullagh as he rode him the last day and he recommended an ease in the ground and a further trip and cheekpieces.

“Niall liked him and thought those things would make a huge difference.”

JOSEPH O’Brien’s Goodie Two Shoes confirmed the promise of her debut win at Killarney two months ago by following up in the nine-furlong conditions race.

That Killarney win was achieved over just short of a mile and a half but the drop down in trip was no problem for the J.P. McManus-owned daughter of Fastnet Rock.

After travelling well through the race, the 11/10 favourite knuckled down well for Declan McDonogh to fend off the 96-rated Monaasib by half a length, and she looked value for more than the winning margin.

“She learnt a bit from Killarney and rode a bit sharper today,” declared the owner’s racing manager Frank Berry.

“It was a good performance and I’d say a mile and a half will suit her fine. I’m not sure what Joseph’s plans are. He had mentioned a race in France for her later in the season but we’ll see what he wants to do.”

The Flaxman Stables-owned son of Ulysses shaped up nicely on his debut at Roscommon last month to finish third to Free To Party and built on that to justify 6/5 favouritism.

Saturn Five made much of the running and showed a good attitude in the straight to repel various challengers, eventually defeating Six Magpies by half a length.

“He’s tough and hardy and still has plenty to learn Shane felt. He’ll have no problem going further either. There’s still a lot of improvement in him,” remarked Brendan Powell.

The only flat fixture of the year at Punchestown concluded with a winner for John McConnell and Conor Hoban as St Cianans Fire (14/1) won the second divide of the 47-65 rated handicap.

On just her second start of the year, the eight-race maiden, who is owned by S.J. Condron, got home by a neck from the 33/1 shot Hello Power.

ANDY Oliver sent out his first winner at Punchestown as the useful Band Width (4/1) notched up his third success of the campaign in the 50-75 rated handicap over a mile.

In a race where very few of the runners ever got involved, the Declan McDonogh-ridden three-year-old was always nicely placed and from early in the straight he looked to have the pace-setting Angel Girl covered.

The J.P. Ledwidge-owned Band Width got on top inside the distance and went on to record a cosy half-length success. Band Width could return to the fray at the Curragh next weekend.

An upswing in fortunes for Sheila Lavery continued as Miramis bounced back to form in the Irish Stallion Farms EBF Fillies Handicap over nine furlongs.

On her first run for three months and running off a mark some 15lb lower than when she started the season, the Spyglass Syndicate-owned four-year-old picked up nicely for Robbie Colgan to forge clear of the field inside the final furlong.

The well-supported 12/1 chance reached the line a length and a half ahead of the staying-on favourite Dark Vega.

“We got her palate done and I’d say that’s made a difference and she’s another who has been waiting in the wings for an ease in the ground.

“The horses haven’t been running badly but we’ve been down on runners because of the ground,” stated the trainer.