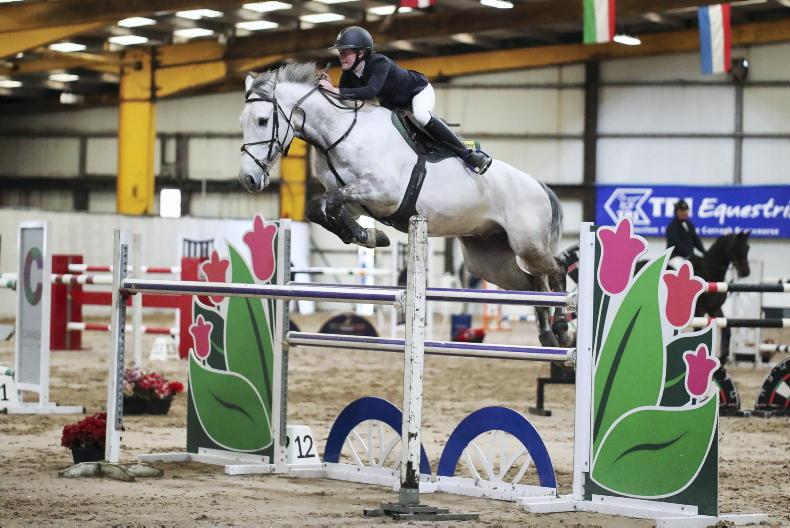 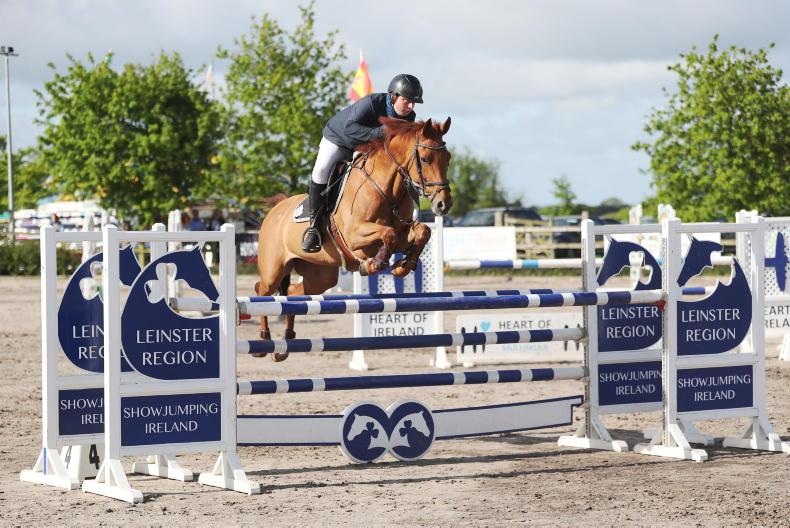 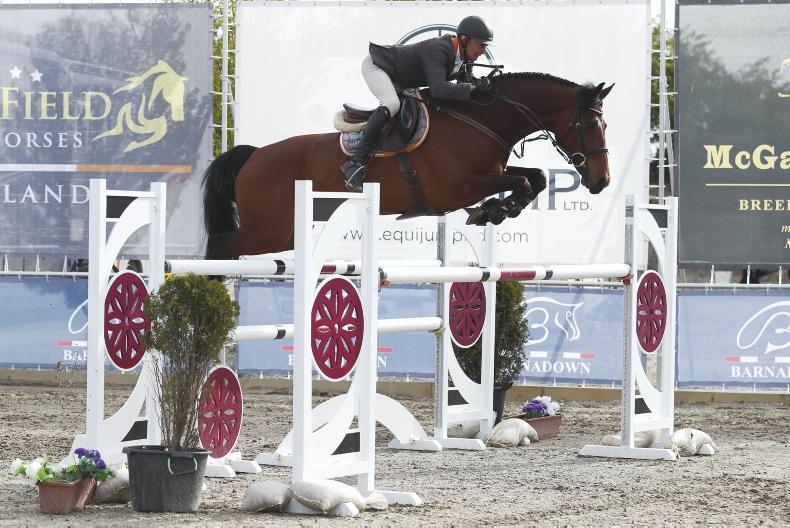 Francis Connors and Luxtapose, winners of the 1.35M Mervue Equine Summer Tour Grand Prix at Barnadown, sponsored by Cooppers, in May 2021 \ Rolf Stenberg Jumpinaction.net
Previous Next

REGIONAL leagues proved as popular as ever nationwide in 2021 with many riders supporting their local regions. Generous prize funds were on offer and the leagues went down to the wire.

Munster’s Robyn Moran proved to be a dominate force on the national circuit and also made her presence felt in her local region. The Limerick rider claimed all three of the Munster League titles at Banteer Gymkhana which was held in Maryville.

Moran started her season well as she took the runner-up in the TRM Showjumpers Club Spring Tour and later in the season was crowned SJI Young Rider Champion in August. In the final of the region league, it was neck and neck in the Connolly’s Red Mills 1.35m Grand Prix with Rhys Williams and Cowboy Balou holding the lead going into the final on 24 points. Moran followed closely behind with Cushlas Fryday on 21 points, while Brendan Murphy was also in contention, having clocked up 20 points with RHS Bule. In fourth place was Richard Hourigan with Killoan Cobra Care on 14 points.

With the points so close, it all came down to the final round where a third-place finish for Moran and Cushlas Fryday was enough for her to take the title. It was Andrew Hodgins and Sandra who took the win in the final round.

In the Sweet Oak Farm 1.20m league, it was all still to play for going into the final round. Top of the leader board on 43 was Gerard Curtain with Walking in Paris, while Moran was in second place with European Cruise on 42 points. At that point no one else was in the running to take this title.

Both riders were equally as capable of taking home the title with both having claimed three victories, plus other good placings. Once again, Moran came out on top as she took the final win aboard European Cruise, clear in 26.08.

There was no disputing the Horseware 1.10m league as Moran went in the final with 40 points with European Cruise, having secured four wins. Her closest rival here was Emma O’Connor on Quality Diamond on 18 points. In the final round, Moran added another victory to her record when she partnered Europe Cruise to a clear in 30.97. Not content with the win, she also took sixth place with Miss Stella, clear in 37.28.

Now in its sixth year, the Mervue Equine Leinster Tour Summer began in early May with Barnadown hosting the opening round. Francis Connors got his opening campaign off to a good start at the first leg, claiming victory in the 1.35m with Luxtapose and second place with Rossa Lough Derg.

In September, the tours returned to Barnadown at the Irish Breeders Classic for the grand finale. The final 1.35m leg was claimed by America’s Charlotte Jacobs and Rincoola Milsean, while Francis Connors took the overall title with Rossa Lough Derg. A sixth-place finish on the final day was enough for him to take the 2021 title. Connors went into the final in a strong position as he had accumulated 27 points.

Runner-up in the league was Gerard Clarke and Lupins Lux Z while the leading young rider was Abigal Boland with The Hurricane.

Leading the victory lap in the final 1.20m decider were Joanne Blair and Mon Ami in what proved one of the strongest startlists with 84 going to post. Deirdre Doyle went into the final round as the league leader and she held on to take the 2021 crown with Authentic Diamond. Leading young rider of the league was Robyn Moran.

In the 1.10m final, 114 entries went to post. Apart from first place, the top six places were filled by amateur riders, demonstrating the talent of this category. Aileen McDermott and Amber Balou went into the final leg with a commanding lead of 22 points and this stood to her to take the overall title and the league working producer prize.

Runner-up in the league and the leading young rider was Robyn Moran. Following a nail-biting class, young rider Robin Carey and CTS Peanuts took the final round, ahead of Leonie Dunne and Cavalino 26 which was enough for her to claim the working producer of the round.

The Connaught League kicked off at Duffy’s Equestrian Centre in May and taking the win in the 1.35m Grand Prix was Galway’s Conor McLaughlin and Shaqiri, fastest of five double clears.

Taking the opening round in the 1.25m Step Up League was fellow Galway rider Sven Hadley and Elastique van de Koekoek.

The 1.15m Development League opener went to Richard Kerins and Knockmullen Chap. There was a further three rounds before the final was held at Galway Equestrian Centre.

It was neck and neck going into the final round with Jessica Lee and Captain Marko holding top place on the leader board on 21 points. There were anxious moments for Lee as she failed to make the jump-off with Captain Marko.

However, she held on to her position to claim her first title on 21 points, while Richard Kerins and Carralavin Cruise earned a second place finish, enough for them to take the runner-up place in the league on 19 points. Johanna Sixt was very close to Kerins as she clocked up 18.5 points with Immun Ocean Ogara.

Taking the league title in the 1.25m division was Sven Hadley with Elastique van de Koekoek. Hadley went on to dominate this league, claiming four of the top six final league standings.

Following their opening win, they took third place at Tubberbride and the win at Ballinasloe to finish on a total of 27 points.

Little stood between the final placings as Conor McLoughlin and Shaqiri took the runner-up place in the league on 25 points. Hadle also took third place with Jessy Van De Heid on 20 points, fourth with Sumas Taloubet on 16.5 points and fifth with Top Spin on 15 points.

The 1.15m league also went down to the wire but in the end, Galway’s Ben Crawford and Easy Alligator Lady took the title. The combination finished on 32 points, having claimed victory in two rounds and second place in the final behind Thomas O’Brien and Carramore Charlie.

Jessica Lee was back in the ribbons claiming the runner-up place in the league on 28.5 points with Harry Beau Bay. The combination were placed in three rounds along with fifth place in the final, which held points and a half.

Taking third place overall was Richard Kerins and Knockmullen Chap who finished on 18 points, having claimed the opening leg and also taking second in the penultimate round at Ballinasloe.

(Note: Full league tables were not available from Ulster Region)