Ryan McElligott reports from the opening day of the Goffs Land Rover Sale, where there was a 92% clearance rate 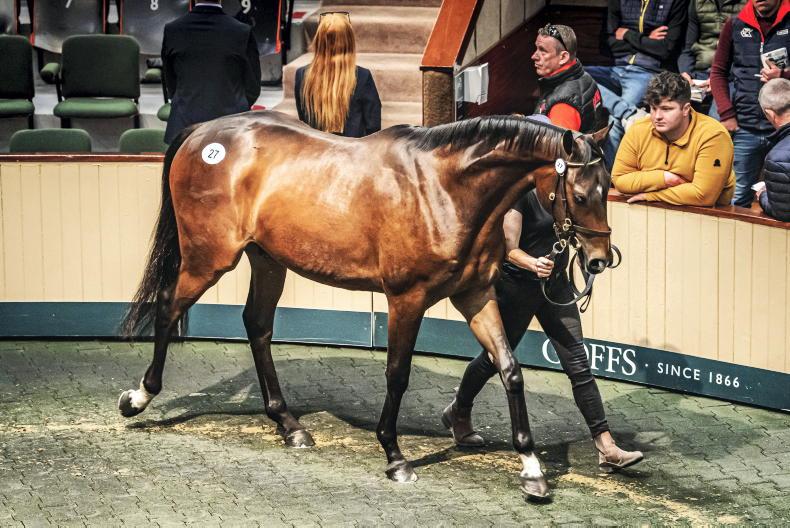 Tom Malone and Paul Nicholls signed for this gelding by Saint Des Saints for €135,000 \ Sarah Farnsworth

LAST year's Goffs Land Rover Sale saw some 22 horses made €100,000 or more but that number was bettered on day one of this year's sale when a remarkable 25 stores hit six figures.

This was reflected in a most impressive set of returns for the day which left the heights of 2021 some way behind.

At the close of proceedings day one had grossed just over €11 million which was a 29% progression on last year. The average of €53,922 was up by 17% and the €46,000 median progressed by 10% while the clearance rate for the day was a most impressive 92%. In short this was an exceptional day’s trade.

The publication of the catalogue for this year’s sale yielded a rare gem in the son of Camelot whom former Irish international soccer player Kevin Doyle bought for €155,000 as a foal in November 2019.

As a half-brother to the one of the great two-miler chasers of recent times whose outstanding race record yielded some 21 victories of which ten were achieved at the highest level, this gelding was easily one of if not the most prized three-year-old to come under the hammer at this year’s round of store sales.

Some nine years after Altior passed through this sales ring for €60,000, this Peter Nolan Bloodstock offering was also going to command multiples of that price with the former Nicky Henderson great having won at the Cheltenham Festival for four years in succession with those wins taking in back to back editions of the Champion Chase.

Ultimately the battle for the gelding came down to agent Margaret O’Toole and Aidan O’Ryan, who was standing with Gordon Elliott. The pair exchanged bids from €280,000 onwards but when the first-named rounded the price up to €300,000 the hammer fell.

It transpired the next day that the horse had been bought back by the vendor.

Mags O'Toole also made a strong play for a No Risk At All three-year-old from Peter Vaughan’s Moanmore Stables but she had to give best to Henrietta Knight whose bid of €195,000 was sufficient to secure the half-brother to the listed-placed jumpers Speedy Speed and Authorised Speed.

A feature of the day was the insatiable demand for the progeny of Blue Bresil whose prowess as a sire was emphasised in spectacular style last season by the likes of the brilliant Constitution Hill.

The sire’s seven lots to come under the hammer averaged in excess of €110,000 and the pick of these was a €150,000 gelding out of a point-to-point winning half-sister to American Mike. Highflyer Bloodstock’s Tessa Greatrex signed for the gelding who will go into training with Ben Pauling.

“We only have a couple by the sire at home but they are definite types and this horse was very similar to them,” observed Pauling. “This horse is a lovely, easy going type with a great temperament and he has everything that you could wish for in terms of size and scope. We were delighted to get him.”

Another in demand Blue Bresil who will be heading across the Irish Sea was a gelding from Springhill Stud for whom Ryan Mahon paid €135,000. Dan Skelton will take charge of the relation to the useful dual purpose runner Pires.

Tom Malone and Paul Nicholls were quickly into stride this morning and within the first hour of the sale they had picked up a son of Saint des Saints for €135,000 and a Doctor Dino gelding for €125,000.

“They are two beautiful horses by elite French sires. It wasn’t that we set out to by French-breds but they were just a pair of good looking horses by top class sires. They’ll be going to Paul and the Saint des Saints has been bought for an existing client who is very fond of the sire,” stated Malone who also spent €110,000 on a daughter of Flemensfirth.

The first lot to hit six figures at this year’s sale was a daughter of No Risk At All who cost €125,000. She was bought by Henrietta Knight on behalf of owner Mick Grech and is a half-sister to a Listed-winning jumper in France. Furthermore her dam is a half-sister to the Grand Prix de Paris winner Khalkevi.

“She will come back to me to be broken and it will be decided in due course where she will go into training. I saw her here on Sunday and loved her when I saw her. I love everything about her, she’s got a great temperament and she’s a fantastic mover too,” commented Best Mate’s trainer.

Gordon Elliott will take charge of a Snow Sky half-sister to Hillcrest whom Bobby O’Ryan secured for €115,000 while the trainer also signed for a €115,000 daughter of No Risk At All related to the dual Leinster National winner Pairofbrowneyes.

The sale continues on Wednesday. 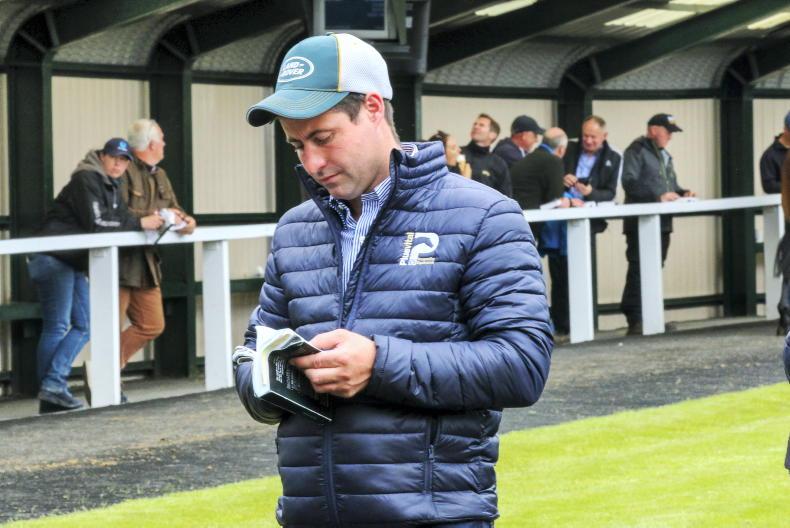 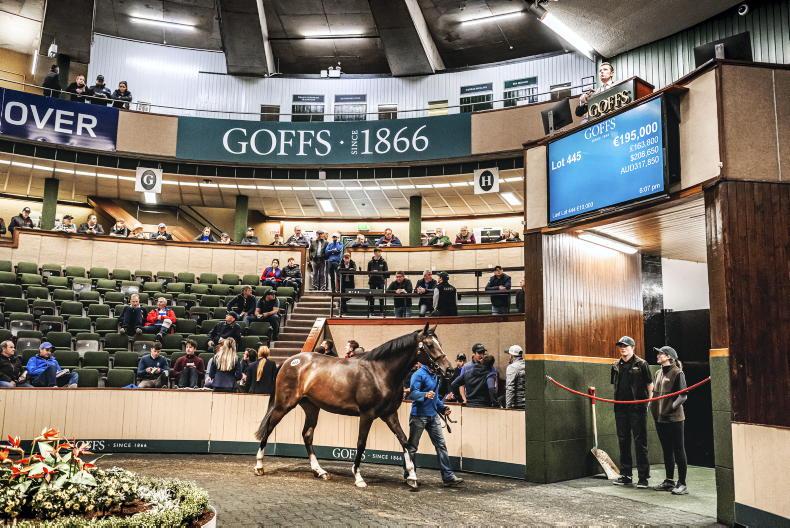 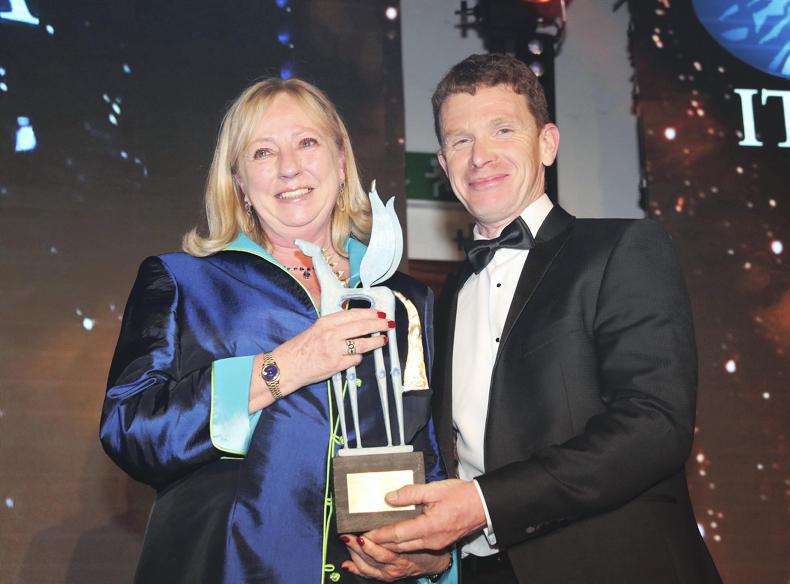 ITBA AWARDS: Mags O'Toole recognised for sales excellence
A key cog in the Gigginstown House Stud success story, Mags O'Toole was honoured for her accomplishments in the sales ring 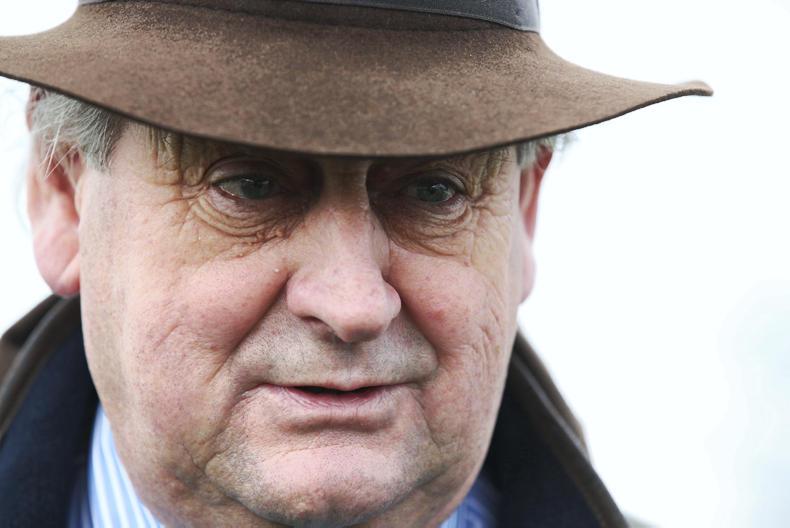 TATTERSALLS HIT SALE: Comer is leading Irish buyer at Newmarket
Leo Powell reports on some of the sales made at Newmarket this week to Irish trainers