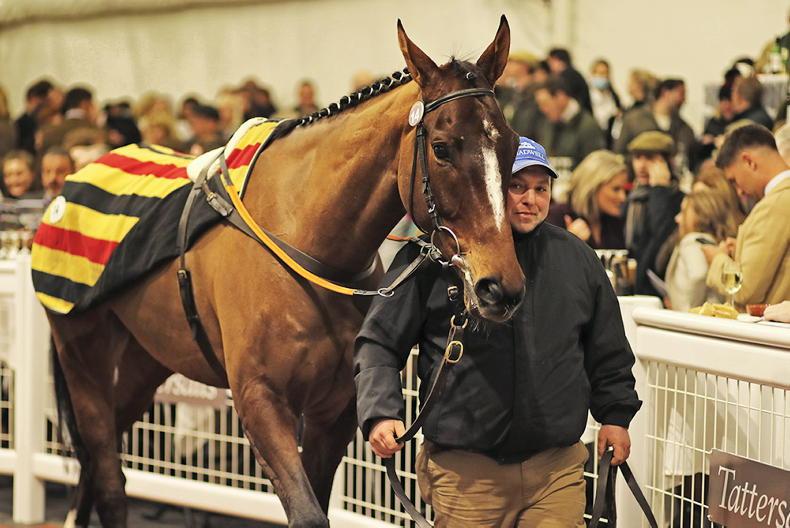 THE first Tattersalls Cheltenham sale of the year takes place after racing next Saturday at Prestbury Park. It’s Festival Trials Day at Cheltenham and it’s likely there will be some big spenders in attendance.

This week Tattersalls Cheltenham published an initial list of 35 entries and more will be added after this weekend’s point-to-pointing and racing.

So far the catalogue includes 32 winning and placed point-to-pointers, and three winning and placed bumper horses. Leading sires such as Blue Bresil, Presenting, Soldier Of Fortune and Walk In The Park are represented and it is noticeable that there are five lots by the up-and-coming Jet Away.

Race replays and full catalogue details can be found on the Tattersalls Cheltenham website.

Lot 3: Another Day Out, 5yo m by Ocovango. Won PTP at Ballindenisk. From Marie Harding.

Lot 22: Barrabooka, 5yo g by Presenting. Winner of Carrigarostig PTP. From Colin Bowe.

Lot 24: Kerryhill, 5yo g by Soldier Of Fortune. Placed second in Kirkistown PTP. From Colin McKeever.

Lot 28: Jetaway To Getaway, 5yo m by Jet Away. FPP (disq) in Borris House PTP. From Michael Murphy (Redbridge Stables).

Lot 32: Parade Away, 5yo g by Jet Away. Placed second in Tattersalls PTP. From Donnchadh Doyle.

Lot 36: Northern Reel, 5yo m by Jet Away. Winner of Tattersalls PTP. From Warren Ewing.

Lot 39: Free The Lion, 5yo g by Let The Lion Roar. Placed twice in PTPs. From Michael Murphy (Redbridge Stables).

Lot 40: Insurrection, 6yo g by Getaway. Winner of a Tattersalls PTP. From W. Harvey (Winterlodge Stables).

Lot 41: Shillanavogy, 5yo g by Soldier Of Fortune. Placed fourth and third in PTPs. From Gerald Quinn (Caherty Stables).

Lots: 35 initial entries. More to be added after this weekend.

Info: Live internet bidding will be available for those who are unable to attend in person.