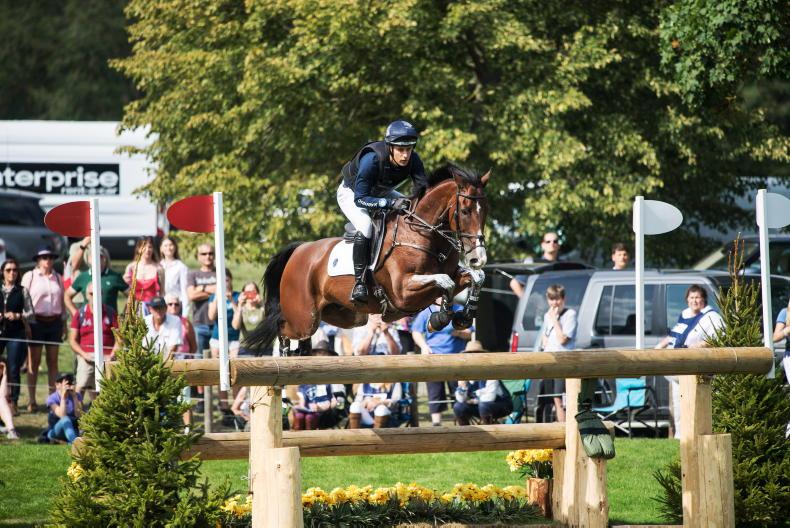 APPROACHING the end of a few busy and successful weeks, Cavan Equestrian Centre stages another two-day sale next week. Running on Wednesday and Thursday, the renewal offers catalogues for young sport horse stock as well as Irish Draughts and kicks off with the former.

The pedigrees look strong enough on both days, but appear especially stout in the sport horse catalogue which includes the Premier Selection of foals. All listed in this sector were present at the Elite Sale selection, and as Stuart Clarke commented at the time: “Any one of these foals would have been worthy of a place at any elite sale.”

Thursday’s Irish Draught catalogue contains progeny of many top show and breeding stock, as well as an interesting selection of broodmares. With five entrants forward, the popular stallion Inisfree The Holy Grail is the numerical stand out in this sector, while also well represented is Young Carrabawn (4).

In the young stock division, Sligo Candy Boy is the standout with 10 lots on offer, and others to feature in number are Cornet Son (5), SIEC Livello (4) and Cornerado VDL (4).

Lot 8 CFS Corvalda, reg 2 yo b f by Cormint out of Kimono Sash (Vivaldo Van Het Costersveld). By the Drumhowan-based Cormint, and from the immediate dam’s line of Rincoola Abu (1.60m) this well-related filly is out of a half-sister to Beir Bua (Kenneth Graham) who is currently competing at 1.45m level; also to Dunganstown Boy (1.50m). The second dam is a full-sister to Rincoola Abu who has produced Rincoola Milsean (1.50m) as well as the James Derwin ridden double gold medallist jumping pony Rincoola Babog and Rincoola Rua (1.50m).

Lot 82 Unnamed, reg b f f by Castlefield Kingston out of Ballyshan Titania (Goodluck VDL). By a young and up-and-coming sire, this filly is out of a half-sister to the dual winning CCI3* event horse Cooley Nutcracker (aka Ballyshan Contender) ridden in America by Elizabeth Halliday Sharp. Other siblings to the dam have been very successful sale’s horses, and with a dual-purpose pedigree and from a progressive family, this filly should excel in show jumping or eventing.

Lot 101 CBS Cornets Lancelot, reg b c f by Cornets Son out of Dowdstown Larina (Lancelot). The second foal from a young family that features Dowdstown Narina (1.60m) as the grandam.

Lot 102 Calvador Royal, reg gr f f by Calvador Z out of Cavalier Madame (Je Suis Francais). Bearing an attractive performance pedigree, this filly is out of a half-sister to the event horse Hold Me Down (Andrew James), who competed at Luhmuhlen CCI5* and has been well placed at CCI4* level in both the UK and in Ireland. Also, to the jumper Sacre Bleu (1.40m).

Lot 107 Atlantic Bounce, reg 14 yo gr m by Grange Bouncer out of Lady Christine (Warcraft). One of seven broodmares on offer, this traditionally bred mare competed to 1.20m level, and carries both a Irish Draught and thorougbred dam’s line. Already the dam of three progeny, she is currently in foal to the exciting young stallion Rock N Roll Ter Putte.

Lot 42 Stracomer Sealore, reg b f f by Locarno out of Lissyegan Dam Royale (Luidam). Dam is a full-sister to Lissygan Lui Royale (1.50m) ridden by Damien Griffin. Others to feature in this very stout and prolific family are Lissyegan Luise Royale (1.40m) and the four-star event horse Rehy Lucky partnered by British rider Lauren Medcalf.

Lot 43 Annaghquin Foxy, reg ch f f by Zirocco Blue out of Annaghquin Lady Jane (Royale Concorde). Hailing from a stout dual-purpose pedigree, the dam was a RDS finalist and competed to 1.35m with Nicholas Butler. She is a sister to Douglas (CCI5*) who under British rider Simon Grieve completed Burghley in 2017, and won the CIC3* at Ballindenisk in 2016.

Lot 52 Unnamed, b c f by Riesling Van’t Roosaker out of Caol Ila Birdavenue (Eros Platiere). A very stoutly bred brother to Eagle Eye Birdavenue Z (1.40m), while the dam competed to 1.50m with Belgian rider Brent Gaublomme. Carrying a smart pedigree back through the generations, the second dam Egie of Colors (CSIO5*) also jumped to 1.50m and aside from the dam of this colt, bred Inaki Van Den Dael (1.45m). The dam’s line gathers pace yet again, as the third dam bred Show Show (1.60m), Calimero of Colors (160m) and Tinkas Hope (1.60m), etc.

Lot 56 Leestone Cristella, reg b f f by Cristello out of Acajou Van Het Kloosterhof (Heartbreaker). A sibling to Leestone Cannon Breaker (1.30m) and to Lustre VH Kloosterhof (1.30m), while the dam also competed to 1.30m. Bred in the purple, the dam is a sibling to the Qatari-based Nations Cup winning Dejavu (1.60m) as well as Chameur VH Kloosterhof (1.45m) and many others. The third dam bred Well Done (1.60m) and JF (1.50m).

Lot 59 Unnamed, reg ch c f by Emerald Van Ruytershof out of Oughterard Sky Cruise (Cruising). Carrying a predominately eventing pedigree, this filly is a sibling to the Wills Oakden-ridden Oughterard Cooley (CCI4*), as well as to the three-star campaigners Oughterard Diva (CCI3*) and Oughterard Quality. There are also some notable show jumping relations, as the second dam by Sky Boy is a sister to Robert Splaine’s Big Ed (1.50m) and to Cavys Boy (1.40m).

Lot 60 unnamed, b f f by SIEC Livello out of Miss Marley (Pacino). Another with a more familiar and prolific dam’s line, this filly is out of a full-sister to Vincent Byrne’s Mr.Rockfeller (1.55m), to Chief (1.50m) ridden by in America by Ian Sillitch, and to the event horse Silver Night Lady (CIC2*). Moving further into the dam’s line, the third dam is Barry O’Connor’s good mare Drumaire (1.50m), dam of Cruisella (1.50m). The family also features LCC Lux Like Cavalier (1.60m).

Lot 69 Unnamed, reg bl f f by Cornerado VDL out of Eclipse D’Hyrencourt (Ogano Sitte). From a top continental pedigree, the dam is a sibling to Chic Hin D’Hyrencourt (1.60m) ridden by Beazie Madden, as well as to Virtose D’Hyrencort (1.60m) and to several others at levels between 1.40m and 1.50m. The second dam Linotte de Sohan also jumped to 1.50m under Pieter Devos, and counts Fritzy (1.60m) and Moujik de Sohan (1.60m) among her many successful siblings.

Lot 127 Ludden Molly Keane, reg gr f f by Young Carrabawn out of Ludden Heather (Killcotton Cross). A good-moving filly by and out of Class 1 stock, she has two promising siblings, one of which achieved Class 1 with Bronze Merit at the last Spring mare inspection.

Lot 128 Fuerty Welcome Lad, reg ro c f by Gortfree Lakeside Lad out of Fuerty Welcome Mist (Welcome Emperor). One of the standouts in the catalogue, and by the multiple ridden and in-hand champion sire Gortfree Lakeside Lad, this colt won his class and was champion foal at IDHBA in Stradbally and was also a prizewinner at this year’s National Show. The dam is full-sister to the RDS broodmare champion in 2019, while another full-sister, Fuerty Lea, bred the winning filly foal at this year’s National Show in Punchestown.

Lot 129 Unnamed ch f f by Touch of the Emperor out of Our Rosheen (Rosheen Yeats). This good-moving filly has won and been placed at every show she has attended, including the runner up spot at the IDHBA show in Punchestown.

Lot 164 Lily Donavan, reg 1 yo gr f by Luke Skywalker out of Miss Donavan (Huntingfield Heathcliff). One of the last crop of Luke Skywalker foals, this yearling has an attractive outcross pedigree. With many old sires in her back breeding, she offers breeders an opportunity to continue breeding from outcross and endangered bloodlines.

Lot 184 Carrigrua The White Lady, reg 10 yo ch m by Holy Cross out of Inisfree The White Lady (Crannagh Hero). A former All Ireland ID Filly Foal Champion (2012) and All Ireland ID Yearling Filly Champion the following year. This mare was also the recipient of the Irish Draught Horse Breeders Association ‘Young Irish Draught Show Horse of the Year’ Award in 2013 and champion Irish Draught mare on numerous occasions between 2013-2018. She also gained her Bronze Award for loose jumping at the HSI RID Inspections.