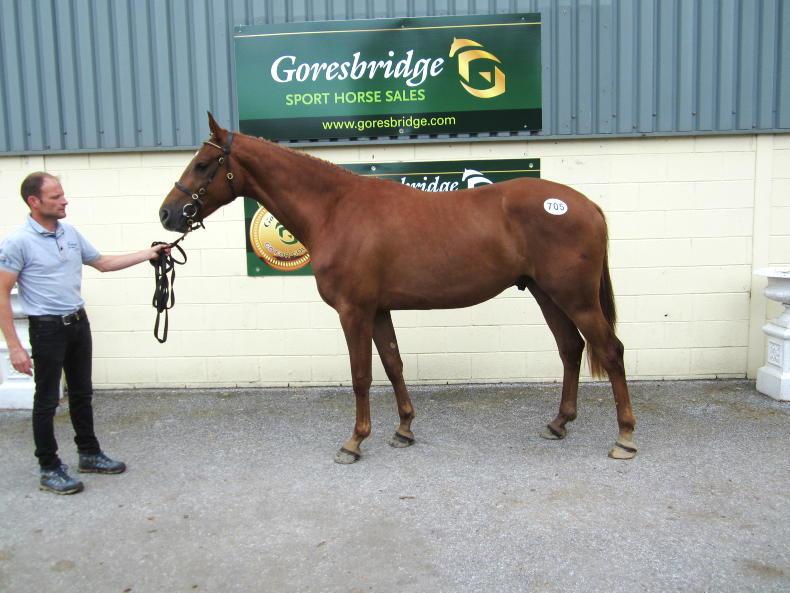 Bill Toomey’s Touch of Panache was sold for €13,500 in Goresbridge \ Sally Parkyn 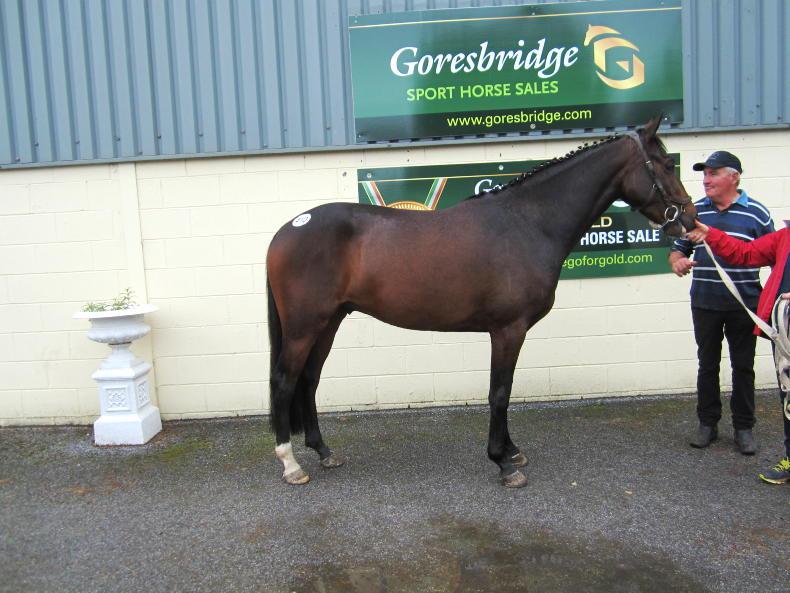 GORESBRIDGE has been a lucky venue for Co Waterford breeder Bill Toomey, who for the second year in succession, headed the three-year-old figures with a home-bred son (Lot 705) of Conthargos.

A full-brother to last year’s sale-topper, the well-named Touch of Panache changed hands at €13,500, and while this was considerably less than the €25,000 received 12 months ago, Toomey was pragmatic.

“I hoped to have made a little more, but I know someone will enjoy him. He’s a lovely horse with a wonderful temperament, and I just wish the new owners all the very best.” Toomey also went on to praise the gelding’s handler Benny Crowley, who he described as “a real horseman.”

Signing the docket for this eyecatcher was Warwickshire-based Carron Nicol of show jumping’s European Sport Horses (UK). A prominent online buyer back in July, Nicol vowed then to attend in person and fulfilling her promise she snapped up 12 lots over the three days.

Formerly a big buyer in Ireland, Nicol has returned to these shores following decades of sourcing her stock in Europe. She commented in July that the Brexit logistics had made buying in Holland and Belgium increasingly difficult, and it was gratifying to hear her praise her new Irish purchases this week.

“I have found such good value here,” she said. “I have bought some lovely horses, the calibre of which I could never have bought for this money in Europe.”

Nicol, together with her show jumping son Leo Lamb will be kept busy breaking this bunch, but first Lamb has to compete in Lanaken with another of Nicol’s string.

Never far from the ringside, Nicol also accounted for an unnamed son (Lot 598) of Lagans OBOS Quality for €13,000. Narrowly failing to meet his reserve in the ring, but soon secured afterwards, this smart sort was prepared by the O’Meara family, and is out of the traditionally bred Sea Lady Maid by Coevers Diamond Boy.

One of the second crop of Ballypatrick’s up and coming young sire Jorado, this filly was prepared for sale by Stevie Keane’s Kereen Stables, and out of Allenstown Cavalier, is a sibling to several notable performers including Allenstown Luidam (1.30m).

As the leading numerical sire in the catalogue, Vivant Van De Heffinck’s highest earning progeny was Tom Jones home-bred gelding (Lot 410) out of the three-star event mare Euralia A (Escurdo).

Heading Monday’s returns at €12,000, this one was knocked down to Fethard-based event rider and producer Paul Donovan. “To buy a home-bred is always nice,” he commented. “I knew the dam when she was eventing – and as an extra bonus he is already broken.”

Unusually, the show jumping buyers outnumbered those from the eventing fraternity, but one who looked every inch an event horse was Michael Lyons’ Newmarket Pride (Lot 586).

By, as his name suggests, Newmarket Venture, this elegant gelding was out of the lightly raced thoroughbred dam Niamh’s Perk (Executive Perk) and was sourced from his breeder Brian Daly earlier this year.

“I bought him out of the ‘magic’ pen!” jested showman Lyons, who revealed that he found his former All Ireland champion show horse Newmarket Knight and others from the same source.

Bidding through her Co Wicklow-based business partner Niamh Rothwell (Irish Sport Horse Agency), Shropshire event producer Annie Dalton was the successful buyer, and she looked to have bought well at €11,800.

The former is by the traditionally bred sire Uskerty Sweet Lad out of Glensensaw Bonnie Princess (Bonnie Prince) while the latter is out of the very well-related Aster, who is a half-sister to Queen Z (1.50m).

The thoroughbred sires were among the minority in the catalogue, but their progeny held their own and were headed at €10,200 by PJ O’Mahony’s home-bred Brooklodge Rising Tide (Lot 656) a big gelding by Watermill Swatch out of the select broodmare and show winner Brooklodge Ruby (Riverland Roi).

Co Wicklow-based sport horse producer Daisy Duggan picked up the tab for this good sort, who will be produced through the young horse classes next season.

Buyers came from all corners of Europe, and among the most prolific was Frenchman Geneste Guilaune who, together with some colleagues from Nantes, accounted for 11 lots with prices ranging between €7,200 to €1,100. Other overseas buyers included customers from Belgium, Hungary, Germany and the Czech Republic.