Title: SHOW JUMPING: Daniels and Haros beat all to win 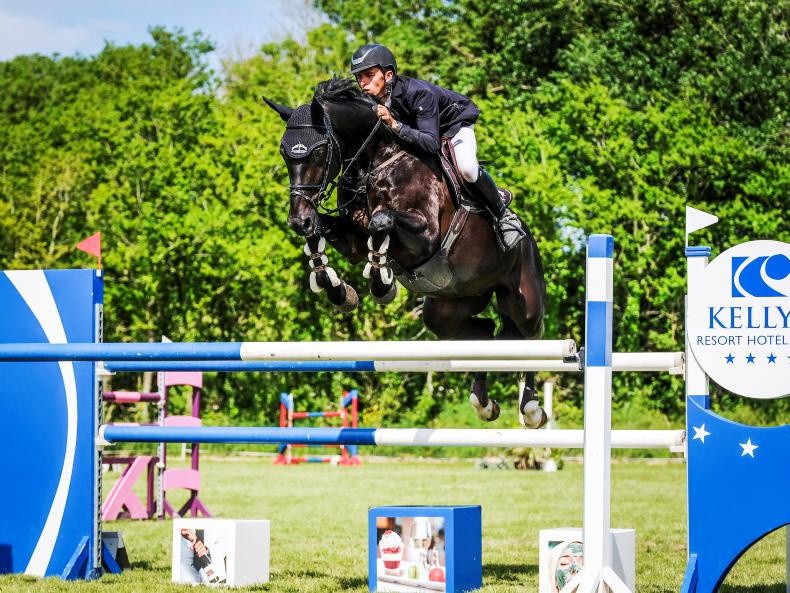 ACTION in the Mervue Equine Leinster Summer Tour continued at Wexford Equestrian with large numbers contesting the second round of this popular tour.

Last Sunday, Kildare international event rider Cathal Daniels took the win in the 1.35m division, when he delivered the winning clear in 39.61secs with his own Haros. This 10-year-old gelding was bred by GFK Zwartjens and is by Sheraton out of the Carembar De Muze-sired Dominka.

There was no shortage of support for resident rider Taylor Peare as she took the runner-up spot with Lissyegan Geoffrey with a foot-perfect round in 41.55. Peare also took the prize of leading young rider of the round. This 12-year-old gelding is by Hermes De Reve out of Woodbank Shiraz. This combination has been in form of late and among their good results was finishing fourth in the Young Rider RDS qualifiers at Barnadown.

Cathal Daniels picked up another share of the prize fund when he delivered another clear with Cappog Tomy in 43.27 for third place. The 11-year-old gelding was bred by Tommy Reilly and is by Camiro De Haar Z out of Cornacassa Ferro.

Local rider Patrick Byrne accounted for the fourth and fifth place. He delivered his best result with Oughterard Diva, clear in 43.63. Bred by Gerard Lynch, the nine-year-old mare is by Puissance out of the Cruising-sired Oughterard Sky Cruise.

Riding Anne Kavanagh’s Ballyorney Storm Boy, he proved out of luck as he finished on four faults in 41.83 for sixth place. This 12-year-old gelding is by Flexabil out of the Clover Hill-sired Ballyorney Allianna.

Separating Byrne’s placings were Nicholas D. Connors and Holy Blue when they came home clear in 44.23. Bred by Bernard Demets, the 11-year-old gelding is by Chacco Blue out of the Cassini I-sired Nilima.

In Saturday’s 1.10m division, Kilkenny’s Marie Hartley added more points to her leaderboard tally as she took the win with Nikita Van Het Heidenhof, double clear in 33.34. This combination finished fourth in the opening round, which means that she is on the top end of the leaderboard. The combination are certainly on form having won the recent Amateur RDS qualifier in Galway Equestrian. She also took the runner-up place with Scarthill Vendi when she kept the poles in place in 33.99.

Fellow amateur rider Michael O’Neill (AA) was almost three seconds behind aboard Hermes De Cavalier in 36.11 for third place, ahead of amateur rider Jenny Connors (A) and Primo Cino, clear in 36.61. Fifth place was filled by Alice Martin Jones (AA), and her seven-year-old Paloma V/D Padenborre, clear in 38.52, while Francis Conors and the Michael Hayden-owned Primo Aliboo Blue ABF slotted into sixth, clear in 39 seconds.

In the 1.20m division, 59 combinations contested this two-phase special class. From those, 17 maintained clean sheets. It was definitely Marie Hartley’s day as she also led the victory lap riding Scarthill Vendi (36.70).

Resident young rider Taylor Peare took the runner-up spot when she was less than a second behind with Lissyegan Geoffrey in 37.68. Young rider Jack McKeon slotted into third place, clear in 40.37 with Ronan Rothwell’s seven-year-old, Boleybawn Larina.

Fourth place belonged to junior rider Emily Moloney and the Ian Smyth-owned Capitol Cruis in 40.48. Francis Connors was back in the line-up, this time taking fifth place with Hugh Fitzpatrick’s Erne River View (7yo), clear in 41.64. Completing the top six line-up was Heidi Hamilton and Dam Easy (42.07).