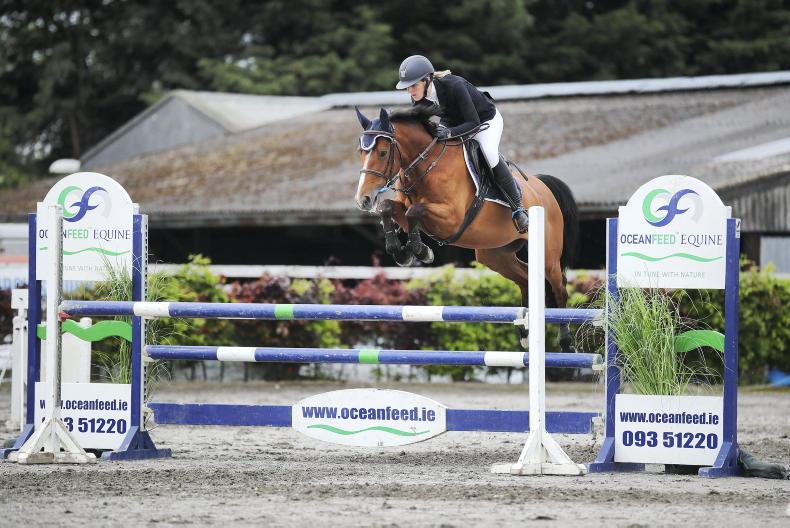 THE second round of RDS Amateur Qualifiers which took place at Galway Equestrian saw a total of 129 combinations battle it out for a place at Dublin Horse Show. Of those competitors, 85 were ‘A’ riders and 44 were ‘AA’ riders. To book a place in this very competitive division, there was no doubt in riders’ minds that triple clears were required to claim one of the eight slots available. In this round, the top eight finishers came home within 35 seconds.

No stranger to this pressure, Kilkenny rider Marie Hartley (AA) took first place when she delivered a clear with Nikita Van Het Heidenhof in a blistering time of 32.82. This combination last year finished as runner-up in the championships in the RDS when they were one of just three double clears.

This combination has been in form of late, claiming third place in the Botanica International Amateur Championship. Before this, they finished fourth in the opening round of the 1.10m Mervue Equine Leinster Tour in Barnadown. Bred by Jozef Van Miert, the nine-year-old mare is by Cumthago C out of Clever Lady VD Paardehove.

Ashley O’Sullivan [A] didn’t hang about with the eight-year-old Dowdstown Quality and her time of 32.96 saw her take the runner-up spot. This is a new mount for the Kildare rider, having taken over the reins in March this year.

Caelinn McCabe (A) followed closely behind with Kuda and their time of 33.46 saw them take third place. The Kilkenny young rider has been riding the 10-year-old Luidam-sired gelding since 2020 with much success.

Fourth place was filled by Carlow rider (A) Leonie Dunne when she crossed the line with nothing to add aboard Cavalino 26 in a time of 33.53. This combination finished fifth in the championship last year, when they clocked the second fastest time of the jump-off but was unlucky to have one on the floor.

Lorraine MacGuinness (A) also stayed within the 34-second marker with Horseware Kinmar Night, crossing the line in 33.65 for fifth place. This combination had booked their place in the jump-off in the first qualifier in Killossery, failed to qualify on that occasion, but made no mistake the second time out.

Following a great season in 2021, Limerick rider Aideen Kirby (AA) secured her place when she partnered Derg Masterpiece to a clear in 33.79 for sixth place. Kirby, who is chairperson of Showjumping Ireland’s Amateur committee, is making her return to the RDS having qualified last year .

Having claimed the Dublin Horse Show Championship in 2019, Sligo rider Adrian Gilmartin took seventh place when he delivered a clear with Carnaval Cocktail in a time of 34.60.

Accounting for eighth place was Co Down rider Danielle Logan (A) and Demero after they came home in a time of 34.65. This Womanizer-sired gelding has been produced by Logan since 2019 with a host of results up to 1.10m. Last year they finished second in the Amateur Championship at Balmoral.