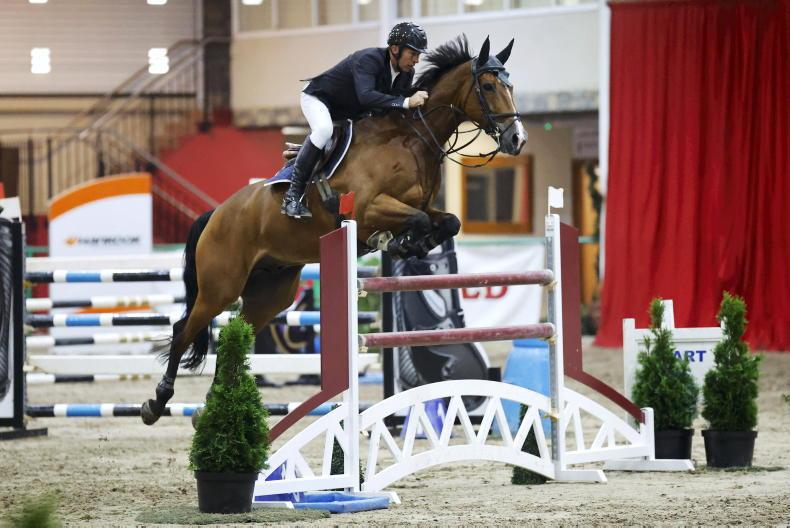 THE late Ailish Connolly was remembered during the Cavan Indoor Championships last weekend when Saturday evening’s 1.35m Grand Prix was held in her memory. The much loved show jumper from Maynooth passed away in February after an illness and on hand to present the prizes on Saturday was her mother, Margaret, as well as her siblings, nieces, nephews and group of friends.

The €3,000 class attracted a large entry of 79 and, in the end, it was Dermott Lennon who took home the beautiful Ailish Connolly memorial trophy. Drawn 50th to go in the class, Lennon guided his own eight-year-old gelding Anthem In My Heart to the fastest clear round in 55.27 seconds. The Irish Sport Horse, who has no breeding recorded on the Irish Horse Register has shown good results this season, including a four-star 1.30m win in Vejer de la Frontera and placings in Bolesworth and Lier.

On Friday evening at the venue, the 1.35m Cavan Grand prix took centre stage in the main arena, with 66 combinations battling it out for the €2,500 prize fund.

Leading the victory lap was Nicole Kershaw and Lisa Rosbotham’s 11-year-old gelding Lotus Van ‘T Nachtegalehof (Kashmir Van Schuttershof x Air Jordan Z). One of 16 to progress to the second round, the pair kept all the poles in place in a time of 44.39.

Fellow young rider Niamh McEvoy took third place when she came home clear with Richard McEvoy’s eight-year-old gelding Lisboy Louie (Luidam x Key of Luck) in a time of 45.53, ahead of another young rider, Sarah Fitzgerarld who was riding Annette Fitzgerald’s HHS Lou (Luidam x Clover Echo) and came home with nothing to add in 46.57.

Last of the double clears in 46.93 and taking fifth place was Elaine O’Neill and the Keith Ennis-owned Olympic GL FVD.

Completing the top six was John Floody with HTS Carnananbreagha after he managed to deliver the fastest round in 42.27 with the penalty of four faults.