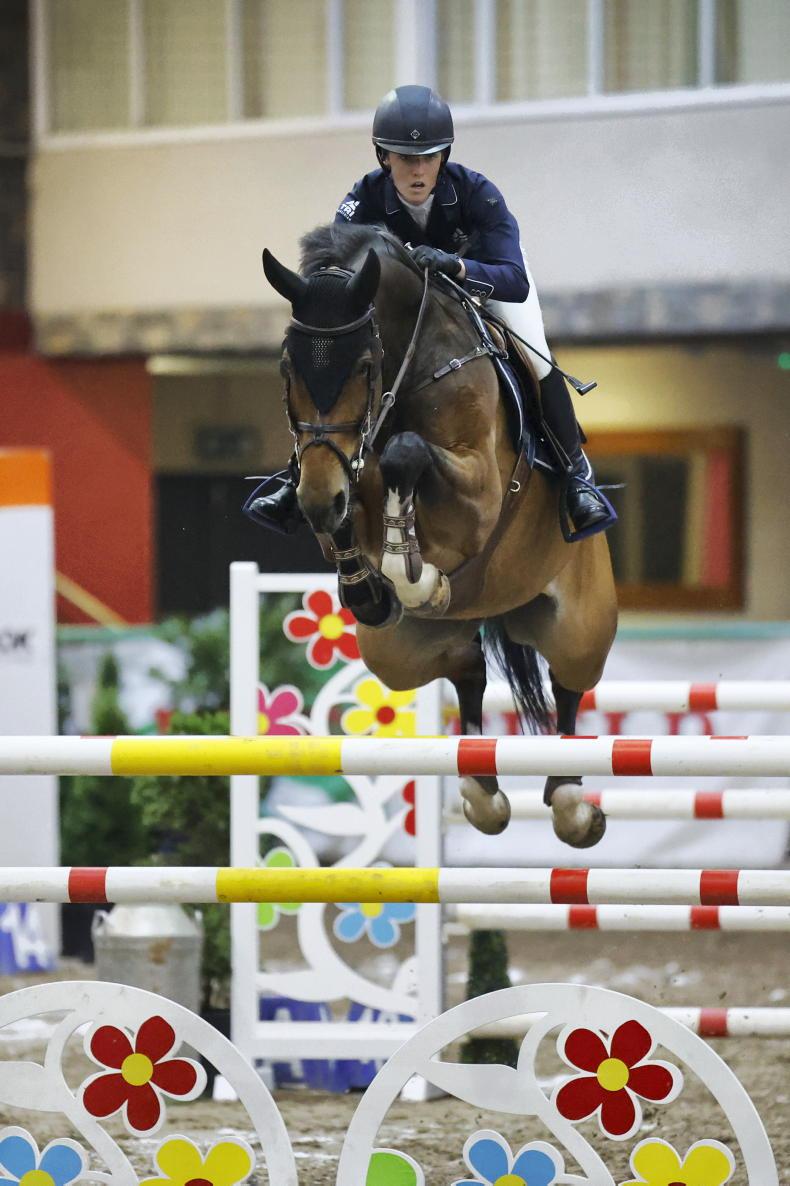 THE feature young horse class of the Cavan Indoor Championships, the six and seven-year-old Hankook Final, took centre stage in the main arena on Saturday night in front of an enthusiastic crowd to watch the 41 who had qualified battle it out for the €6,500 prize fund on offer over three rounds, eventually won by an in-form young rider.

Eight combinations managed to clear the first round of the Stuart Clarke-designed track and six of those went clear again in the second round to make it through to the third round jump-off.

Against the clock, just four managed to produce a triple clear and claiming victory was 18-year-old Niamh McEvoy with Maeve Kelly’s MB Lorenzo R when they broke the beams in a time of 39.82.

Bred by Michael Beattie, the seven-year-old gelding is by Tolan R out of the Voltaire-sired Vienna. Under the command of Michael Roche, who has produced her since 2020, the gelding finished fourth in the seven-and-eight-year-old Championship at last month’s Dublin Horse Show when he was one of just four double clears.

Speaking after the win, McEvoy said: “This was my first show on the horse and he went brilliantly. He was produced by my cousin Michael Roche and he did an excellent job on him. Michael recorded a good lot of results on him and after the Dublin Horse Show, Maeve Kelly bought him for me to ride.

“Maeve is from Banbridge and it’s her first purchase of a show jumper. He is a horse with a lot of talent and scope and he is also very straightforward. I really think he has a great future ahead of him. The plan is to travel to the Sunshine Tour and hopefully take home another few wins.”

Sophie Richards also delivered a clear in the jump-off with her own and GBBS Ltd’s Artic Blue, in a time of 42.54, which would see them take the runner-up place. The six-year-old gelding was bred by Gestut Lewitz and is by A Pikachu De Muze out of the Chacco-Blue dam Chasandra.

Patrick Hickey and Karmalensky occupied third place when they came home with zero faults in a time of 44.76. Owned by Patrick’s brother William Hickey and bred by Paul Brady, this seven-year-old is by Cornet Obolensky out of Karma I (Ard VDL Douglas).

Shane Mc Closkey and the Poppy’s Flash Back also put in a faultless performance and clocked 48.47 to take the eventual fourth place. Owned and bred by Hilary Furlonger, the six-year-old mare is by OBOS Quality out of Poppy Du Carel.

Emily Turkington proved out of luck as she came home with eight faults in the final round aboard her own Fashion Lights in a time of 40.24 for fifth place. Bred in France by Florian Pecile, the mare is by Vigo D’Arsouilles out of the Opium De Talma-sired Tequila Verte.

Joanne Blair and the Richard Bourns-owned Fuerty Hero Brigade (Querlybet Hero x Clover Brigade) finished on 14 faults in a time of 57.99 for sixth place. The seven-year-old was bred by Blaithin Bailey.