Peter Jordan's Dollar Value has now amassed earnings approaching €100,000 and had no difficulty coping with a revised mark of 132. 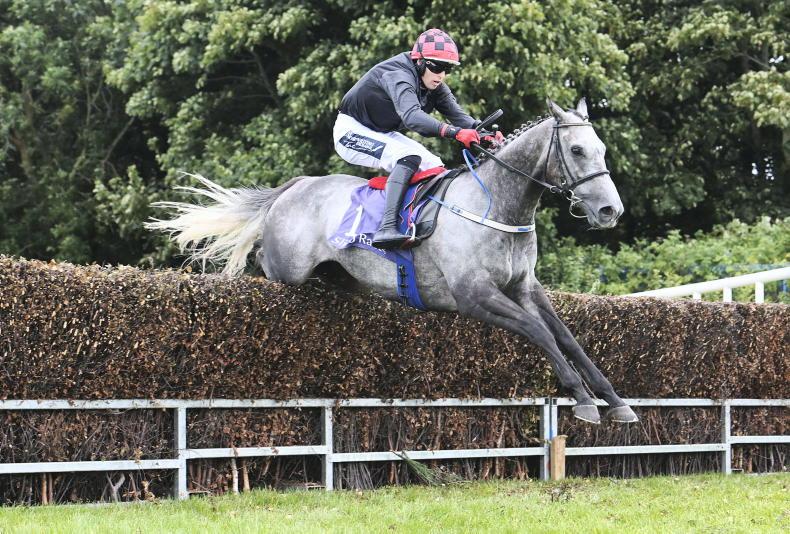 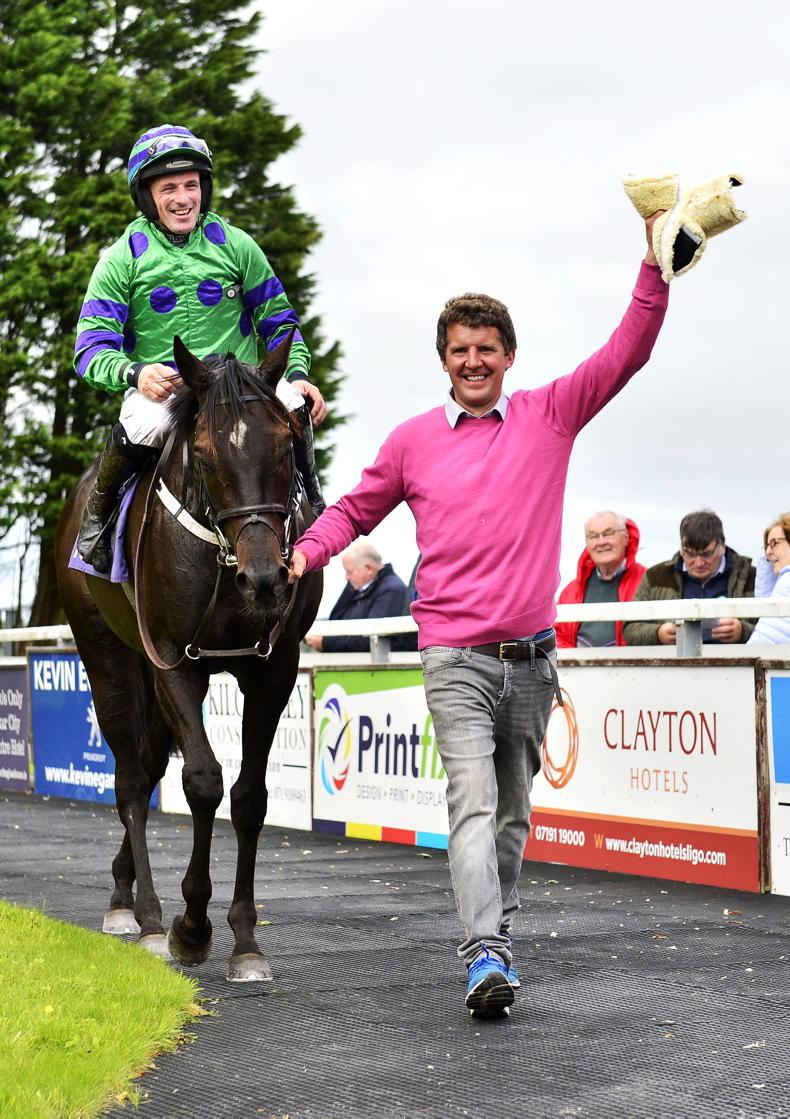 THE admirable Dollar Value produced the performance of the day as he shrugged aside top weight in the Frank O’Beirne Handicap Chase which headlined a treble for Keith Donoghue at the track’s annual all-chase meeting.

The Tom McCourt stalwart looked to be on excellent terms with himself when he bolted up at Downpatrick in late August and that display resulted in a stone hike in the weights, but the grey had no difficulty coping with a revised mark of 132.

Keith Donoghue allowed Dollar Value to stride to the front at an early stage and from some way out the outcome here concerned just the leader and Bold Emperor.

The latter tried hard to keep tabs on Dollar Value but was fighting a losing battle from two out as the Peter Jordan-owned gelding surged away to score by 10 lengths.

Dollar Value was picked up for £13,000 just under three years ago and has now amassed earnings approaching €100,000 with this being his 11th career success.

“He’s in a great vein of form at the moment. Keith is a great horseman and he jumped great for him again today. He’ll be well up in the weights after this so we’ll go for a Grade 2 chase at Gowran Park in early October,” remarked McCourt.

“The plan then is to go to the November meeting in Cheltenham after which he’ll be left off.”

Keith Donoghue was earlier successful on the Gavin Cromwell-trained Faith Du Val in the Irish Stallion Farms EBF Mares Beginners Chase which she added to the maiden hurdle win she recorded at this track 13 months ago.

The Olive O’Hara-owned daughter of No Risk At All was returned a well-backed 7/2 shot under Keith Donoghue and took her time off a strong early pace before improving to lead at the second last.

From this point Faith Du Val always looked to be in control and she held a lead of a couple of lengths over Hidden Land when that one came down at the last.

This left the leader to finish 15 lengths ahead of the favourite Mighty Meggsie.

“She has been jumping great at home and we knew she’d handle the place. The little ease in the ground was ideal for her and the good gallop suited too,” commented Cromwell.

The concluding leg of Donoghue’s treble was supplied by another Cromwell inmate in Broken Ice in the Brenda Anderson Memorial Beginners Chase which was run over just short of two and three-quarter miles.

The Swans High Stool Syndicate-owned six-year-old was returned the 2/1 favourite to build on a second to True Faith at Tramore last month and made much of the running in a race restricted to horses rated 109 or less over hurdles.

Clonbury Bridge was an ever-present threat for the final circuit but could find no way past in the straight as a determined Broken Ice prevailed by three-parts of a length.

AFTER stealing the show at this fixture last year with a four-time, John Ryan made another worthwhile trip to Sligo where The Little Yank opened his account over fences in the near two and three-quarter mile conditions chase.

A very useful hurdler, this vastly experienced Ryan-owned seven-year-old had two previous chase runs to his name and a repeat of his second to Ash Tree Meadow at Killarney in July was always going to make him a leading player.

The 7/4 favourite also got a masterful ride from Kevin Brouder who bided his time for most of the race before producing his mount to pounce at the last and The Little Yank asserted readily on the run-in to defeat the 135-rated Grand Bornand by four lengths.

“He’s a smashing little horse. He wears his heart on his sleeve every day and he’s a lovely horse to have,” commented Ryan.

“Listowel is this horse’s main aim and we were using this as a prep for there. He loves his racing and takes it well and even though he’s not over big he’s a good jumper. I’d expect him to improve for this run so he’ll run again next week and so will Ferdia (finished fourth).”

It was a day to savour for rider Mikey O’Sullivan who registered his first success since turning professional when Robert Tyner’s Dangan Des Champs took the 0-95 rated handicap chase over an extended three miles.

The Michael Hoare-owned mare could be picked out travelling well from some way out and the 18/1 chance asserted in the straight to defeat Diegos Way by two and a half lengths. Dangan Des Champs hadn’t shown much on her three previous starts this season but did win a Tralee point-to-point in late May.

AN excellent few months for Golden Sandbanks (11/4) continued into the Leo McMorrow Memorial Novice Handicap Chase over an extended two miles where Paul Flynn’s charge made it three wins from his last four starts.

The Aidan Gallagher-owned five-year-old made a winning debut over fences in a Tramore handicap chase last month and an 8lb rise in the ratings failed to halt his momentum. From some way out, Sean Flanagan’s mount was nicely placed behind the leading duo and he took charge shortly after two out en route to seeing off Name Me Famous by four lengths.

There was a most poignant success in the offing in the 0-102 rated handicap chase where Philip Fenton’s Secret Cargo (10/1) prevailed just a few days after his owner Michael Daly had passed away.

The complexion of this race began to change from the second last where the leader Zagnzig parted company with his rider after making a bad mistake.

This left Magic Piper in front but he was being strongly pressed at the last where Mutual Respect came down when within a length of the lead.

Then on the run-in, Niall Moore produced Secret Cargo and he kept on well to hold off Eddies Pride by half a length and record his third win in just under a year.