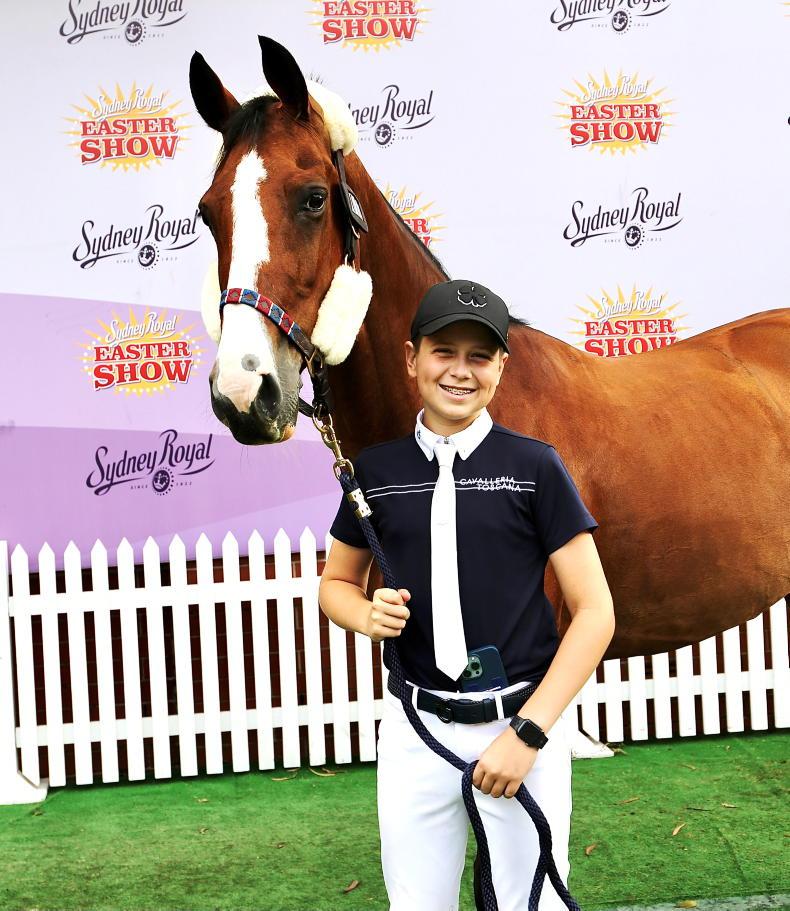 THREE out of four wins, including the junior Grand Prix, clinched the overall junior and champion boy rider titles for 13-year-old Charlie Magnier, competing in Sydney’s show jumping classes for the first time.

It was a pretty remarkable week for his father Tom’s Coolmore Australia team with a consignment of 46 yearlings sold at the Inglis Sales and a Group 1 treble for offspring of one of the resident stallions, So You Think, at Randwick Races.

“No stallion in Australia has had three Group 1 winners in the one day,” remarked Charlie’s mother Sophie, who was back at the show later in the week for the hunter pony classes.

“It’s the first time that Charlie has jumped here as he was too young before but I’ve been here before with his younger sisters Millie, Evie and Rose, as they do showing here.”

A visit to the Sydney Royal Easter Show is customary for many New South Wales schools. “Charlie does Ag at school and his friends are down in the cattle section.”

Quinn Z, a 10-year-old granddaughter of Querleybet Hero, was sourced by Darragh Ryan. “Around the stables, we call her Heidi. She came over from Ireland,” Charlie said about his Sydney treble winner.

“Last year we went over to Ireland and bought her in August. Darragh found her and then Charlie jumped her in Europe until we came back in December. She came over in March, three weeks quarantine in Newmarket, then two weeks quarantine in Melbourne so it was quite tight to get her here to this show,’ added Sophie, who credits the Ryan family for starting off her children and their cousins, the Wachmans.

“They all started with Tomás Ryan, Darragh’s dad: Max, Tom and Ali [Wachman] and Charlie’s sisters. Charlie had already started riding in Australia but Tomás got him going jumping.”

Holly Miller, Darragh’s Scottish partner, was on hand to coach the pair. “We’ve been home two years. Darragh’s doing the Z Tour in Lanaken with his string of horses so I flew out on Sunday evening, arrived on Monday and straight into training with Charlie. We go back on Monday.”

Making that trip too was the Sydney junior champion who planned to compete in Belgium during his Easter school holidays. The bloodstock or show jumping worlds in the future? “Time will tell. I love show jumping, it’s good fun,” he replied.

Another Premier County team member at Coolmore Australia’s base in Jerrys Plains is Aoife Crotty, a Kildalton College graduate.

“I’m from Kilsheelan and I’ve been in Australia for four years, based at Coolmore since January 2018. I just came out for six months. After I did my BHS exams in Kildalton, I went travelling to America, then France and now I’m here!

“We’ve 10 horses and ponies, I manage that area and teach the kids. There’s so many Irish there [in the Hunter Valley] and it’s much more relaxed than Ireland, a different pace of life. Everything is much more easy going and it’s mostly sunny!”

Sophie added: “Aoife is an absolute star and we would be lost without her. She is just a wonderful person and so special for the children to spend so much time with such a lovely Irish lady. Tom and I are so grateful to have her as part of the team and family.

“Charlie’s Australian coach decided three weeks ago he could no longer coach as he is moving to Florida. So Darragh sent Holly over to us to help us at the show. She was only with us for a week but she saved us. As she knows both the horse and rider it was the best possible option. None of it would have been possible without Aoife and Holly.”