Leo Powell reports on a strong breeze up sale, headed by a paid of Tally-Ho Stud lots 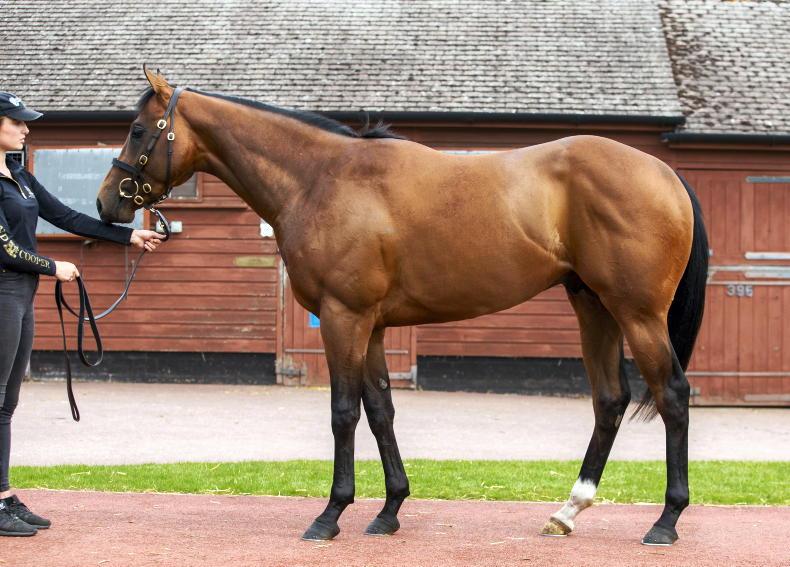 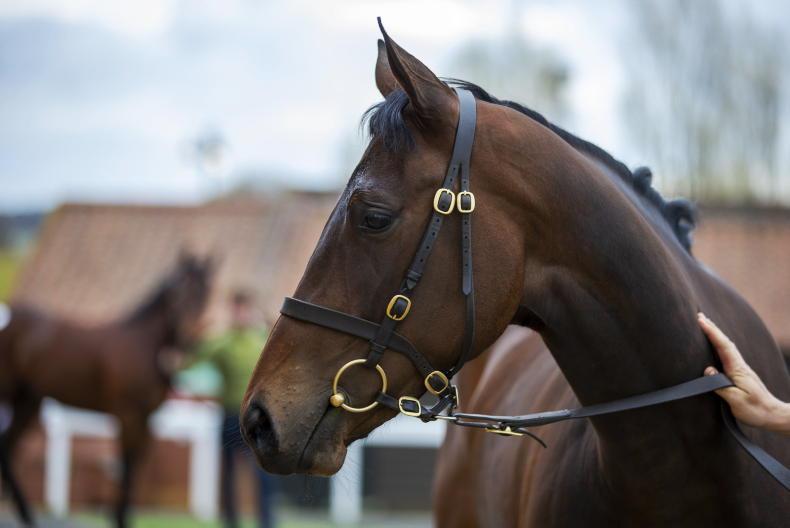 Tally-Ho Stud's daughter of Kodiac headed the second session of the sale at 460,000gns \ Laura Green 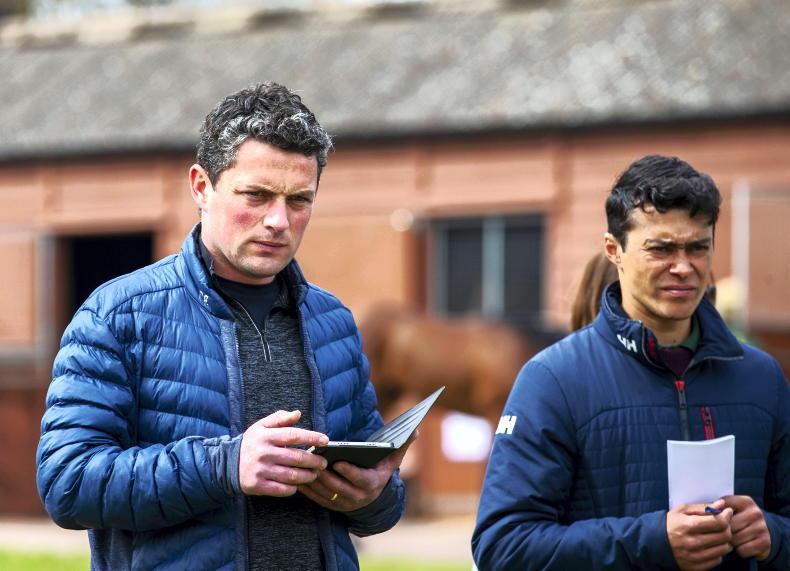 MASSIVE increases on a year ago, the third-highest turnover in history and a broad global buying bench were all great positives to be taken from the two-day Tattersalls Craven Breeze Up Sale, though the record clearance rate of 12 months ago could not be matched, falling on this occasion to 77%. Nonetheless the company’s chairman was pleased with the outcome.

Edmond Mahony reflected on the successful business transacted in the sale ring, and the performances of classic aspirants during the week at the nearby Newmarket racecourse, when he summed up the results. He said: “The fact that the Tattersalls Craven Breeze Up has produced the winners of both of this week’s premier classic trials, Cachet and the unbeaten champion Native Trail, is a powerful endorsement of our premier breeze up sale, and the competition for the two-year-olds over the past two evenings has reflected the sale’s reputation for consistently delivering two-year-olds of the very highest calibre.”

He added: “Domestic buyers have faced stiff opposition from a diverse crowd of overseas buyers, all of whom have contributed to a Craven Breeze Up Sale which has posted gains in the key metrics of average, median and turnover, albeit with a clearance rate which has not matched last year’s record level. In addition to the strong overseas contingent from America, Bahrain, Dubai, France, Italy, Kuwait, Qatar and Saudi Arabia, we have had live internet bidders registered from Hong Kong and Japan.”

With sales of more than 1.7 million guineas, and the top two lots overall, Tony and Anne O’Callaghan’s Tally-Ho Stud had a fine week, and both of the leading lots were by their own leading sire, Kodiac. The sale on Tuesday was about an hour old when the sale topper appeared in the shape of the first foal of the winning Oasis Dream mare No Lippy, an own-sister to a stakes winner but a half-sister to the Group 1 Prix Marcel Boussac heroine Albigna.

The homebred realised 525,000gns and the buyer was trainer David Loughnane, standing on the back wall, who outgunned Oliver St Lawrence on the stairwell. Loughnane signed for the lot in association with Omni Horse. “He is a lovely animal, he is very well balanced, he did an exceptional breeze, the fastest breeze of the lot,” said the trainer. “He just looks an out-and-out Royal Ascot horse.

“He has a very good pedigree, his dam was a very good two-year-old for Mark Johnston. I love everything about him, he has a lot of quality and let’s hope he can back up on the track, fingers crossed. He is for a new syndicate. I didn’t think that we would have to go that far for him. I knew he was not going to be cheap, but thankfully I have some owners who are willing to back him.”

The dam was bought by Tally-Ho at the Tattersalls December Mare Sale in 2018 as a two-year-old for 20,000gns.

The O’Callaghan’s also headed the trade on Wednesday evening with a daughter of the seven-time Italian winner and stakes-placed Fasliyev mare Yajala, whose previous offspring include the listed winner Evil Spell and the Group 3 Jersey Stakes runner-up Society Power. She sold for 460,000gns, bids coming from Jake Warren, Richard Brown and David Redvers, but it was Irish trainer Michael O’Callaghan who emerged successful.

Afterwards he said: “I have bought a lot of good horses off Tally-Ho – Blue De Vega, Twilight Jet, Now Or Never to name just a few. She is a lovely filly, did a very fast breeze, and is a lovely physical with a great pedigree. She ticks all the boxes and hopefully she will make up into a Royal Ascot filly. She has been bought for Amo Racing who are new to the yard this year.”

Tally-Ho sold four of the 15 lots to realise 200,000gns or more, with their Mehmas half-sister to last year’s Group 1 Phoenix Stakes winner Ebro River selling to Peter and Ross Doyle Bloodstock for 300,000gns, and Blandford Bloodstock snapping up a Night Of Thunder colt for 225,000gns.

“Mehmas again!” smiled Ross Doyle after purchasing the former. “He has been very good to a lot of people, including ourselves and the Hannons. We bought him as a breeze-up horse here and he has done magnificently well at Tally-Ho as a stallion. We are huge fans and Richard Hannon is a massive fan.”

He added: “She is a real two-year-old and has a very good pedigree. She comes from one of the best homes in the game; there are a huge amount of positives. There is a lot of speed in the pedigree, with Slade Power there too. Hopefully she has got a lot going for her. The long term the plan is to breed from her if she can go as quick as she looks.”

Doyle goes on the War trail

A COUPLE of highlights on the first night of selling concerned the sales of a War Front colt for 425,000gns and a wildcard entry, a Zoustar filly, for 400,000gns.

The former was sold by Native Trail’s consignor, Norman and Janet Williamson’s Oak Tree Farm, and was fought over by Satish Seemar and bloodstock agent Ted Durcan, the latter emerging victorious. “He is from a marvellous stable, he is a smashing looking and moving horse, vets are happy, and he is going into training with Joseph Parr in Newmarket. He is for owner Oliver Harris who already has horses with Joseph,” said Durcan.

Williamson said: “I have to give Mark McStay a mention. He knew I’d had luck with War Of Will [also by the sire and breezed by Williamson] and he said ‘Listen, there is a War Front colt out here that has not been sold’. So really without Mark we would not have got to him.” The colt went through the ring as a yearling not sold at $170,000, McStay signing later at that price under the Avenue Bloodstock banner.

The colt’s dam Pine Needles, a daughter of Giant’s Causeway, was Grade 3-placed and is out of the Group 1 Oaks d’Italia winner Meridiana, the dam of nine winners including three blacktype winners.

The final lot on Tuesday was bought by Peter and Ross Doyle Bloodstock and sold by Aguiar Bloodstock. The daughter of Zoustar is out of the winning Exceed And Excel mare Saccharose. “She is outstanding, I have not seen a filly like that for a long time,” said Ross Doyle.

“She is an unbelievable individual, she breezed well, and she comes from a very good home and came highly recommended. She is for a new client.”

The underbidder was Tweenhills Stud’s David Redvers, who has been standing Zoustar in his four seasons at stud in Britain. The filly was bought by Midland Equine last August for €75,000 from Ecurie des Monceaux.

Racehorse owner and breeder Bill Gredley bought a Zoustar filly from Jim McCartan’s Gaybrook Lodge Stud, out of the listed-placed Oasis Dream mare Cordial, for 270,000gns. The purchase was signed under the banner of Stetchworth and Middle Park Studs.

She was bought as a yearling for 70,000gns by MC Bloodstock at the Tattersalls Somerville Yearling Sale.

Irish consignors to the forefront

THE second session started strongly with the sale of a colt by Sioux Nation, from Willie Browne’s Mocklershill, for 380,000gns. He was bought by Anthony Stroud, while the underbidder was Richard Brown of Blandford Bloodstock. Peter Doyle, sitting with representatives from Najd Stud, was also involved.

“He is a very nice horse, he will stay in England and is for KHK Racing, Bahrain,” said Stroud. “He moved very well, did a good breeze and is from a good consignor; he ticked the boxes. He is the horse we wanted to get tonight. Richard Brown is a very good judge and he was the underbidder. He looks a real two-year-old and Sioux Nation has had a winner.”

The colt was bred by Pier House Stud and is a half-brother to the Grade 2 Breeders’ Cup Juvenile Turf Sprint winner Twilight Gleaming. That daughter of National Defense finished second in the Group 2 Queen Mary Stakes last year, and the Wesley Ward-trained filly is again due to travel over for this year’s Royal Ascot meeting.

Johnny Collins of Brown Island Stables has headed twice to Germany on yearling purchasing missions. “The last time I was there I bought three horses, including one called Khan. He went on to win the Preis von Europa (Group 1),” said Collins. “It is going to be hard to beat that, though Khan didn’t make me any money!” Last autumn Collins returned with a colt by Oasis Dream whom he sold for 310,000gns to Godolphin, having paid just €58,000.

Collins added: “He was a beautiful yearling with a great walk, he was one of those I was surprised that I got to buy, to be honest. He has been a lovely horse all the way through. He has shown us a lot of speed, but if you go through his pedigree he is probably bred to get a mile or a mile plus. I’ll let Charlie Appleby be the judge of that!”

The colt’s Dansili dam Queimada is a half-sister to Querari by Oasis Dream, a champion older horse in Germany in 2010 and a Group 1 winner. She is also a half-sister to the Grade 2 winner Quidura (Dubawi), the Group 3 winner Quasillo (Sea The Stars), and Sharja Bridge (Oasis Dream), winner of the Listed Doncaster Mile and placed in the Group 2 Sandown Mile.

The sale’s leading buyer, Peter and Ross Doyle Bloodstock, waited patiently to pay 300,000gns for a son of leading sire Kingman. He is out of the Group 3 winner Fate, and that daughter of Teofilo was placed in the Group 1 Prix Ganay.

Ross Doyle said: “He is a real good physical for that type of stallion, very straightforward, a good mover, he breezed well and is probably a seven-furling to miler type of horse. He has a good pedigree. We have been lucky buying off Sarah and Mick from Longways; we bought Witch Hunter last year.”

The agent signed in association with Omni Horse, and Doyle explained: “It is a new syndicate, Kia [Joorabchian] from Amo Racing is involved. Hopefully it will be exciting. I am not sure of training plans for this horse.” The father and son buying team, two purchased with Omni Horse, bought seven horses for 1,330,000gns, an average price of 190,000gns.

Doyle said: “We were not planning on buying so many. We are surprised and very happy, I did not think we’d buy that sort of number, it has worked out well. We are very lucky that we have some very good clients supporting us.” 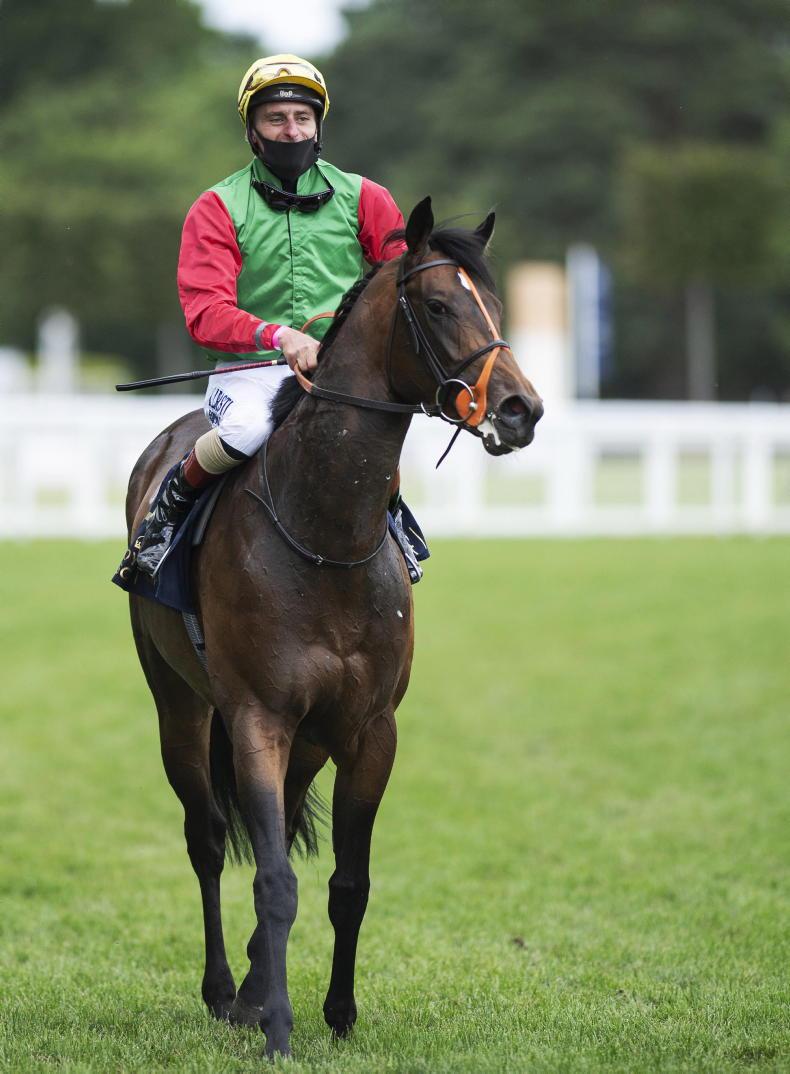 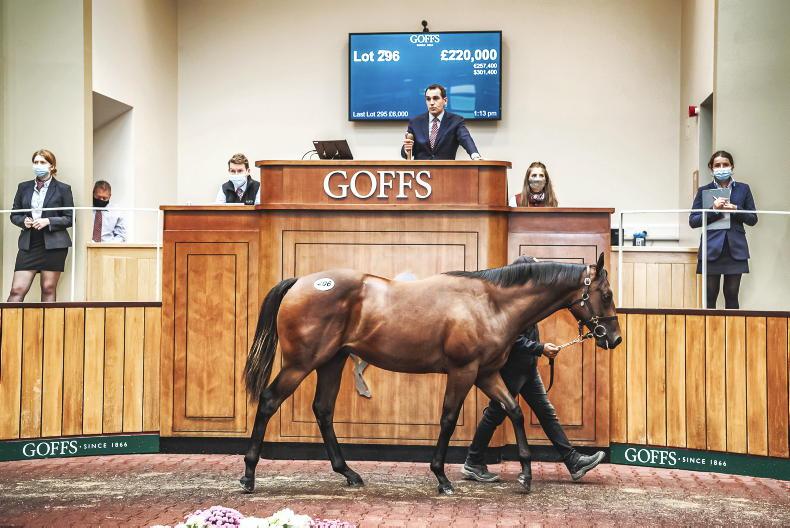 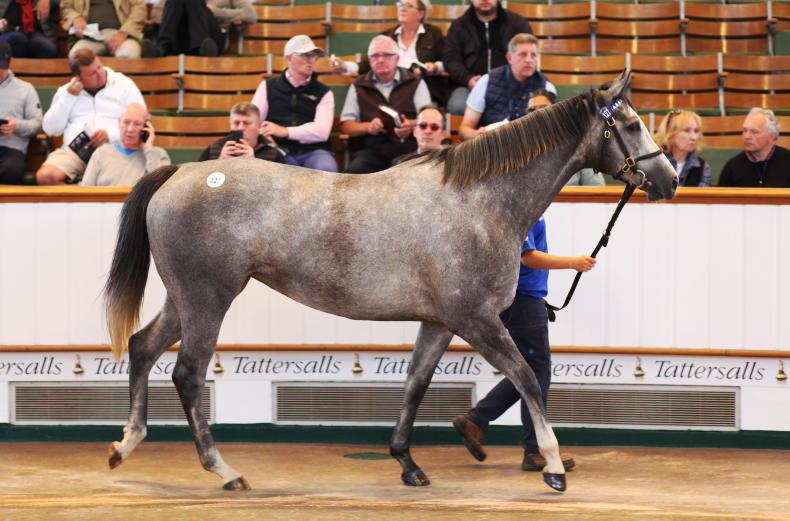 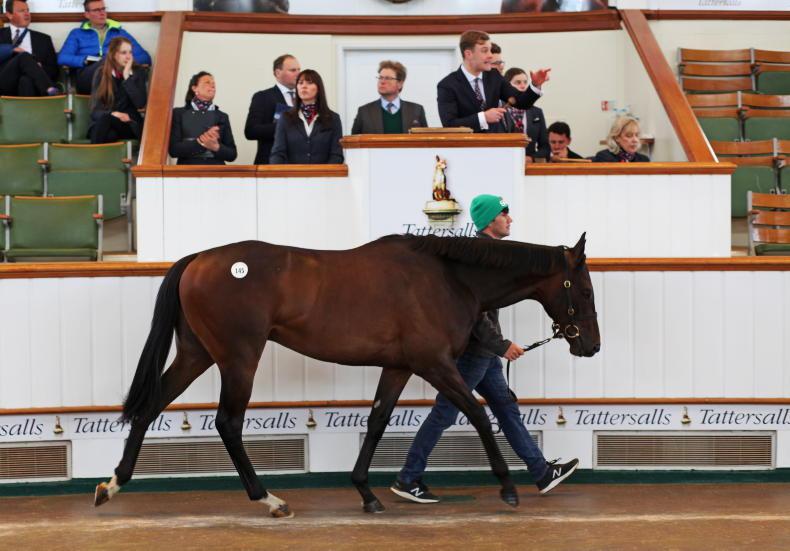