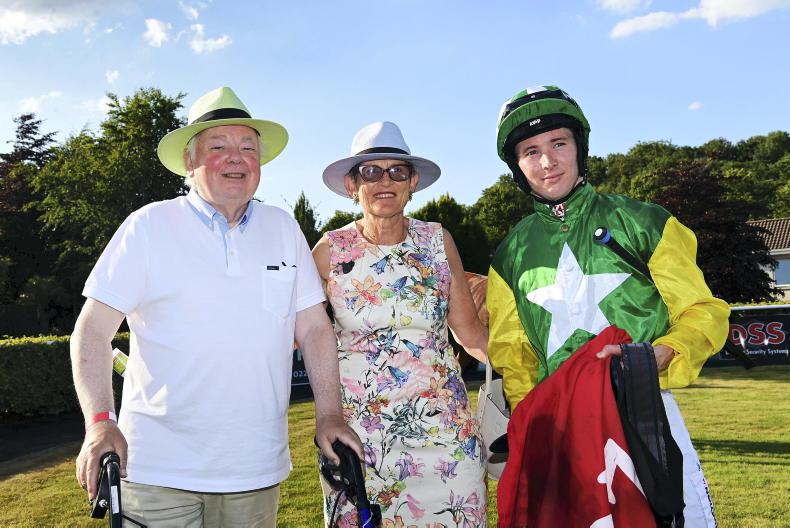 I got the racing bug at school in Blackrock College. Edward O’Grady was a boarder and I brought in The Irish Field in on Saturdays. Louis Gunning of the Irish Press used to bring me racing and afterwards I wanted to get involved myself.

My first venture was taking a share in a horse in England and then they sent me a horse to syndicate in Ireland; he finished second in a Galway handicap in the early ‘70s.

The Turf Club then increased the number of people who could be involved in a syndicate from four to 12 and I’ve run or been a member of them before I was a handicapper and since I retired, I wanted to keep my interest in racing.

My first winner was Why Linger, trained by Paddy Norris, father of racing photographer Caroline. He won the first race at Leopardstown when the new stand was opened in 1971. I think the prize money was IR£202.00!

Your best day at the races?

Every time your horse wins is special and it’s great to share the victory with partners and friends. Susie and I have “discovered Ireland” with our horses and had winners from Ballinrobe to Wexford and more. We’re not fussy!

What is the biggest drawback about being an owner?

If you go into racehorse ownership you go in with your eyes open. There’s no point in being negative about it; embrace all that owning racehorses has to offer, it’s so much more pleasurable. There is nothing that can’t be improved in any organisation and if you have success it’s a bonus.

But participation is the biggest stimulus. The camaraderie between fellow owners and racegoers is very strong. People often go to the same place around the ring to watch the racing so you know you’ll find them there.

The bigger the number of owners involved in a horse the better as when they go racing, they bring friends to enjoy the day.

The standard of amenities has improved enormously since I started, particularly now with the co-operation between HRI, owners and racecourse associations. Each racecourse has their own style of entertaining owners which is much appreciated. Eddie Moran is a welcoming and friendly face at many tracks.

The racetrack websites could be updated to showcase their facilities, in the way you would spend time on a hotel website before booking.

Flat or jumps, which do you prefer?

As the former senior flat handicapper, I should say the flat! But actually, I don’t think the two codes should be segregated – you can enjoy both flat and National Hunt racing.

There used to be more mixed cards but it’s not always financially viable for the jockeys to travel miles for maybe one or two rides in their code.

The most enjoyable race days are the mixed cards at the festivals. It suits the Irish style.

You must have a trainer who makes you feel the whole experience is fun – one that you relate to and someone who communicates well. Trainers are very important in keeping people in racing. Some trainers who get this right can have the same owners for years. One size doesn’t fit all but the most important part of ownership is enjoying it.

I also want to pay tribute to all jockeys; it’s a dangerous job.

What improvements would you like to see racecourses do for owners?

I think we could make racing simpler for everyone – especially those new to the game. We’re still using stones and pounds – that means nothing to many people. It’s a long time since I was sent out to buy a stone of potatoes!

And distances are still in furlongs – why? We should be able to introduce terminology less complicated and dated. You never know how much it puts newcomers off. It shouldn’t be that you would need an honours maths degree!

I was until recently a director at Dundalk Stadium and that is a great example of the way racing should go – outstanding, comfortable facilities, up-to-date audio-visual systems with banks of huge TV screens.

They even bring the bookies inside on a wet night!

How do you think the current crisis will impact on racing in general?

At my age I’ve seen a few crises come and go. Racing has survived two world wars and it shows that it can be resilient to the modern pressures, even Covid.

I’ve had three goes at ownership through syndicates, the first in 1970; then I set up Turform, Ireland’s version of Timeform, and we had a Turform Syndicate, some members of which are still involved in racing and now we are still getting winners with Noel Meade.

Hasten Slowly only cost €17,000 at Goffs last year. When Noel buys for our syndicates, the horses aren’t costing a whole lot more than back when I started.

Mine are green, white and gold based on the Irish flag colours.

We are like the Ballydoyle partners – we each get a chance to race the horses in our own colours! Might And Mercy runs in mine, Hasten Slowly in Mairead Cahill’s colours and Helvic Dream in Caroline Hendron’s colours.

I rely on the experts to pick out the horses – that’s not my expertise. My skill is to pick the trainer!

We normally leave that to the trainer but still, I often have my own views as well.

Generally, I am a seller. If someone comes up with a good offer, I like to move the horses on and reinvest the funds. I like to keep it as business-like as possible.

The Irish EBF auction series and sponsorship for fillies’ races has been fantastic for owners. For example, Might And Mercy’s race had an EBF bonus. Hasten Slowly, when she won at Leopardstown, in addition to the generous prize money, she earned a €10,000 voucher to buy an Irish-bred horse at the Irish sales.

It’s so important to stress the positive. I didn’t realise until we got a couple of two-year-olds how valuable this scheme is to the owner.

In my time at the Turf Club, we introduced a lot of the computerised developments in handicapping and the publication of official ratings. The purpose was to give horses of a similar standard a chance to win races. The system wasn’t clearly defined before.

It made a huge difference to owners and trainers; they could enter a horse knowing what weight it would carry and they could get the right jockey for the job. As an owner I really appreciate the system.

If you want to get more incentives in racing, it’s very important to get all bodies together in some kind of seminar format to pool their talents.

HRI, the IHRB and racecourses all have different problems and it’s important that each disparate section understand each other. Everyone should talk to each other, breeders, stallion masters, jockeys in a non-adversarial way.

Ireland is a small country but in the bloodstock world it’s huge.

Irish Champions Weekend is a great example of collaborative thinking. I’ve used that model doing consultancy work abroad. A feature day or weekend with excellent prize money which attracts the best horses, fans get to see these horses and for smaller owners who contest the minor races, it’s a great opportunity to be part of the big occasion whether it’s the Curragh or Leopardstown.

What advice would you give to someone about becoming an owner?

Go racing and see what attracts you. Get a few friends together and if you need help, check out the HRI owners’ site - plenty of useful information there.

Ciaran Kennelly was in conversation with Olivia Hamilton