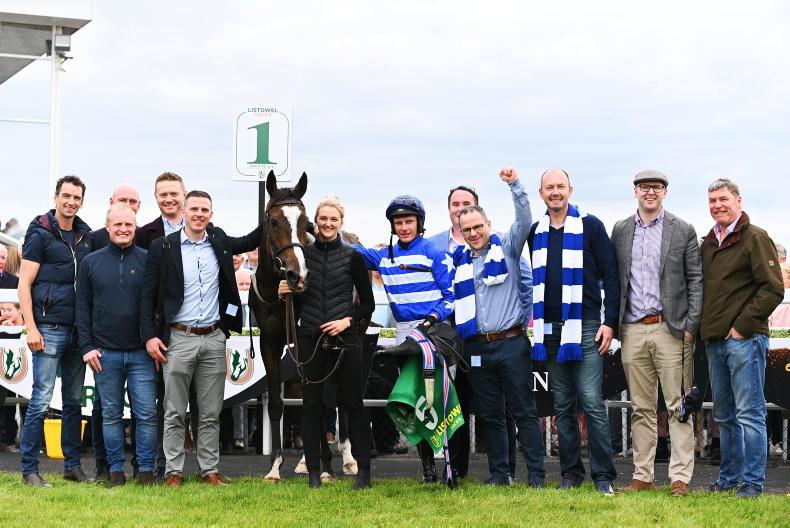 THERE are 18 of us in the syndicate and most of us are from a little village in Co Carlow called Old Leighlin.

It’s just over the road from Closutton, the base of our trainer Willie Mullins. The majority of us have always had a keen interest in racing and I need to primarily thank my uncle for mine and for taking me racing on several occasions as a young boy.

Attending primary school with Patrick Mullins also made it hard not to have a keen interest in the sport from a young age.

I suppose that the racing interests of the other syndicate members have been sparked due the location that we grew up in. Carlow just has a great connection with horses. It’s also helped by the fact that a large number of us grew up during Danoli’s reign over hurdles, the “peoples’ champion” was locally trained in Co Carlow.

It was myself, along with two other men, Derek Mara and Martin Lynch, that decided to get some numbers together to see if we could make any steps towards ownership. When we looked at the numbers that we had collaborated it was amazing to be able to get a syndicate together.

Creating a syndicate was something we were striving to do before covid hit and Patrick Mullins was a great help to us, he made stepping onto the ownership scene possible.

Patrick has always given us great advice and when we went on the hunt to purchase our first racing prospect it was him who gave us the idea to lease.

Leasing was the eventual ownership route that the syndicate decided to pursue and we currently have two mares in training. The first being Nikini who we have leased from John O’Connor. She is now two from four over hurdles and recently won during the Listowel Harvest Festival.

Her lease runs for the entirety of her racing career, until Willie Mullins deems it suitable to retire her. After which, she will returned to John (O’Connor) and used for breeding.

Our second mare in training is a horse called Shan Laylin and we were able to lease her from Burgage Stud. She was due to run on Monday (September 26th) but an unfortunate injury has now delayed her debut until 2023. There is no initial cost with leasing, you just cover the training fees and it has been a great way for us to transform from enthusiasts into owners.

We’ve had many great days at the races, even when we haven’t been involved in horses, and Cheltenham will always be the highlight of these. Hopefully we will be lucky enough to have a runner there one day.

Nikini’s debut race at Ballinrobe was an incredibly special day for us, it was her first race and she went on to win!

The excitement and buzz we got from watching the race put us on cloud nine for about a week. We were absolutely delighted with ourselves; it was such a thrill to be down in the winner’s enclosure and to say that you’ve been involved in horse that’s won a race is hard to beat.

The biggest drawback I think that we’ve experienced, and it’s one that we have only fully understood as owners, is how fragile horses are as animals.

Some people just seem to think that they’re machines that will rock up and be ready to race every day.

Nikini has so far given us a dream passage, she’s had very little setbacks, she’s got to the track, and she’s hardy. However, it wasn’t long into the celebrations of her Listowel win until we received a phone call, Shan Laylin had acquired a stress fracture.

She is now ruled out for the majority of this season and the news quickly brought our ownership experience back dwn to earth.

We were all very impressed with Pat Healy and Listowel. After Nikini’s Harvest Festival win we were all brought into a private bar to have a drink together. It was a lovely touch and a definite standout for me.

Everyone in the syndicate seems to be a lot more attracted to the jumps.

That’s not to say that if Nikini was running over the flat we wouldn’t get into it, but coming from Carlow we’ve just been exposed to the jumps a lot more.

The obstacles make it more exciting and I love the longevity of National Hunt horses, you can latch on to their characters and follow their journey for years.

You want to give your best shot to anything that you get involved with in life.

This was our attitude for picking a trainer. There is simply no better man to train a horse than Willie Mullins. The facilities are top class and I can’t commend the yard enough on how accommodating they’ve been.

It’s never been a problem for us to get down and watch the horses work and we simply couldn’t ask for more.

A few more tickets becoming available for owners is the only thing I can think of. It would be great to be able to bring a couple more of your friends/family along on the days you have a runner.

The basis of the series is that you buy a horse for under €45,000 or less from the UK/Irish store sales and there are allocated weight allowances depending on purchase price. If eligible, you compete in the series of races hosted throughout the season which have a collective prize fund of €355,000, not forgetting the €75,000 final at the Punchestown Festival.

I think an incentive like this for horses at an even lower end of the market, say under €20,000, would make it easier for owners to justify investment especially during the current economic crises.

Our colours are actually the colours of our football club in Old Leighlin. The choice for our colours was originally put to a vote for our syndicate members and the blue and white was the resultant winner. We are proud our colours can represent our small village.

How did the syndicate get its name? We originally wanted to call ourselves the blue and white syndicate after our colours. However, that name had unfortunately been taken and in the end we settled with its Irish translation, Gorm Agus Ban.

What’s next on the agenda for your horses?

As previously mentioned, our horse Shan Laylin, a four-year-old filly by Shantou, is out with an injury and we’re not likely to see her until next summer. As for Nikini, her next big target is in a Grade 3 mares’ hurdle at Down Royal on November 4th. If she can go there and make an impression then I think she would have brought herself a ticket to Cheltenham. A common phrase between the syndicate members is that ‘the dream is still alive.’

The best advice I can give to someone is to try leasing first. It’s a great way to experience the game without undergoing huge upfront costs and it provides a solid understanding of the ins and outs of racehorse ownership.

If it’s a process you enjoy then you can always buy one at a later stage with a greater knowledge of the process and of the hidden costs.

Leasing is also a great way to build foundation relationships with trainers and industry experts whose knowledge you can call upon if you do decide to buy.