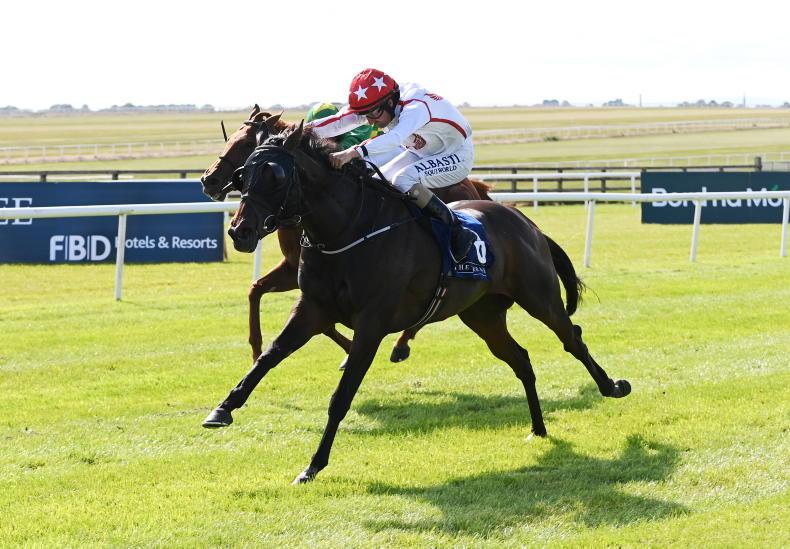 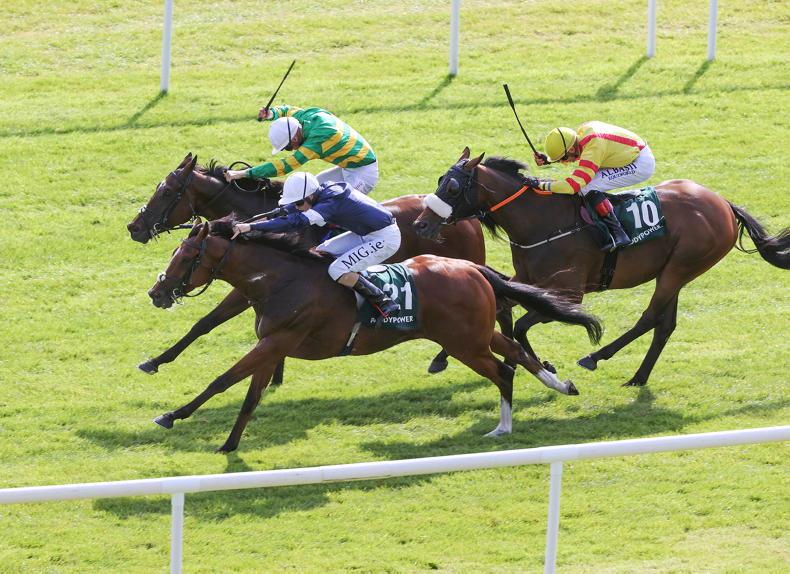 Federal (near) emerged best in the Irish Cambridgeshire but Good Heavens (green and gold) is worth noting for the British equivalent \ carolinenorris.ie
Previous Next

VIAREGGIO (102+) enjoyed her return to the Curragh on Saturday, relishing the prevailing fast conditions to win the Group 3 Snow Fairy Fillies Stakes with the most impressive performance of the day on the clock at flat headquarters.

A switch to more patient tactics brought out the best in the daughter of Caravaggio who, despite being the first to come under pressure, was a convincing two-and-a-quarter-length winner over impressive Galway handicap winner Magic Chegaga.

The principals moved to the front-running Lullaby early in the home straight with the strong-travelling Magic Chegaga (99) looking to hold all the aces in the hands of Seamie Heffernan.

However, Shane Foley conjured a strong finish from Jessica Harrington’s filly whose closing three-furlong sectional of 35.21secs was the fastest of the day’s winners racing over further than seven furlongs and saw her home with a degree of comfort.

This was a second win at the Curragh from just three starts for the three-year-old filly who also ran with distinction when finishing fifth to Limiti Di Greccio on her only other start at the track. I would also be inclined to suggest encountering a fast surface proved crucial to the improved performance.

Conversely, Magic Chegaga may prefer slightly easier ground and might be better suited by encountering a strongly run handicap.

The pair may renew rivalry at Gowran Park in mid-September as they both hold an entry in a Group 3 contest for fillies at the Kilkenny course.

The lightly raced Federal (97) led home a one-two for Joseph O’Brien in the feature handicap of the day, the Irish Cambridgeshire.

The four-year-old appeared to thrive on the generous tempo of the big field handicap, travelling strongly throughout for Mikey Sheehy.

The young apprentice angled for his run passing the two-furlong marker and, under hands and heels only, covered the final three furlongs in 35.84secs to reverse Cork form with stable companion Good Heavens.

Having just his first run in handicap company, the son of Zoffany can defy the rise in the ratings which is undoubtedly coming his way before transitioning into stakes company when required.

Although making his ninth appearance on the track, this was also a handicap debut for the J.P. McManus-owned Good Heavens (97).

An advance entry in the British equivalent of this race at Newmarket at the end of September illustrates connections know they have a well-handicapped horse who looks sure to win in this sphere.

Star Harbour (96) easily fared the best of those who raced close to the pace and further enhanced his record in big field handicaps over a mile at this venue. Ado McGuinness’s gelding should be shortlisted at the very least when presented with the same conditions.

Of those who made ground from the rear, I made a note of Monaasib (94+) who was taking a huge step forward from his previous efforts this season.

The performance of San Aer (86) is also worth highlighting as the time-figure compared well with the Cambridgeshire when adjusted for distance.

Jamie Powell enjoyed a treble on the day and was seen to good effect aboard the four-year-old as the partnership found the gaps opening at the right time to edge out Cnodian (85) by a hard-fought half length.

The closing sectional of 36.14secs was relatively slow on the day, suggesting the front runners slowed to the benefit of Thomas Mullins’ gelding who hinted at a return to form at Galway.

The son of Vocalised is best suited by a strongly run race and can win again before the season concludes if granted similar circumstances.

The same applies to Cnodian who has been a model of consistency this season and could also take advantage of dropping in grade.

Grove and Trove underwhelming on the clock

THE Group 3 contests for juveniles were both below par on the clock although there was still merit to the performances of the winners Aspen Grove (82) and Treasure Trove (81).

The latter ran considerably faster when winning at York on her most recent start when beating Molecomb Stakes runner-up Rocket Rodney over five furlongs.

Saturday’s win over six furlongs was achieved courtesy of a closing sectional of 34.77secs and opens more doors for the Siyouni filly as Paddy Twomey eyes a potential step up to Group 1 company.

The comparison race to the Round Tower Stakes was the following race; the Killashee Handicap won by Ice Cold In Alex (91). The winner was gaining just rewards for his Curragh consistency as Ken Condon’s veteran stopped the clock at a very impressive 34.30secs for his closing sectional.

Aspen Grove clocked a slightly faster time-figure than Treasure Trove despite being slower through the closing stages.