Title: TIME WILL TELL: Luxembourg at his best but should be more to come in the Arc 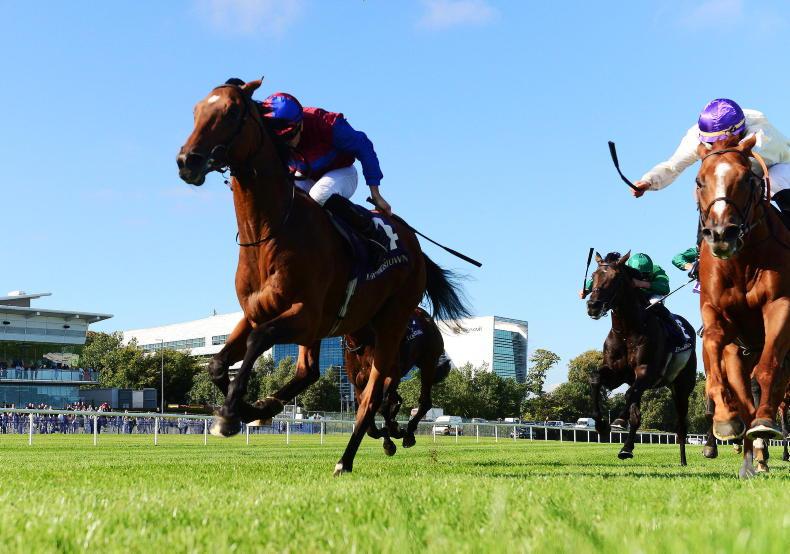 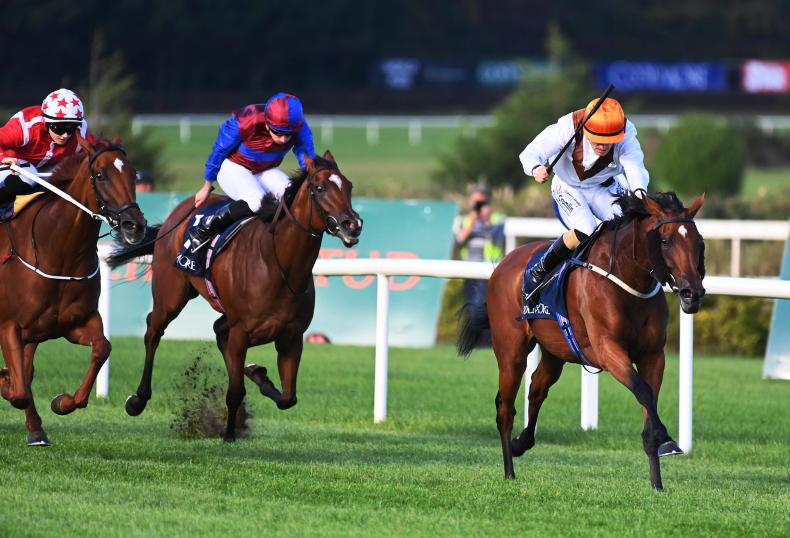 AS predicted by Aidan O’Brien, Luxembourg (124+) improved significantly for his Royal Whip Stakes win at the Curragh to land the Irish Champion Stakes.

The son of Camelot recorded a personal best on the clock with the promise he has more to offer if required according to rider Ryan Moore, who also expressed the view a step up in trip to a mile and a half would be within the colt’s compass.

The clock supports the view of the victory being more about stamina than finishing speed as the winner’s closing three-furlong sectional of 38.97secs was the slowest of the group races for older horses. However, only Pearls Galore rivalled the overall time when adjusted for distance.

There are also grounds for upgrading the performance as the first four home occupied the last four positions turning for home on a day where it paid to race prominently.

As pace-setting Stone Age started to fade, Stephane Pasquier threaded the eye of a needle to challenge aboard Onesto (123), only for Ryan Moore to match the move on Luxembourg before pulling half a length clear in the final 50 yards, endorsing the view of his jockey in a post-race interview.

A clash with Baaeed in the Prix de l’Arc de Triomphe is off the cards now, with William Haggas announcing on Wednesday his stable star will run in the Champion Stakes instead, so that leaves Luxembourg as favourite for Europe’s premier race. On the evidence of his win last Saturday, few will stay as strongly as he does over the mile-and-a-half trip.

Vadeni (121) was short of room through the closing stages although my view would be the ground contributed to his downfall as the sparkling turn of speed which saw him ease into contention in the Eclipse at Sandown was not evident on Saturday.

His jockey felt that he was ring-rusty following a significant absence from the track and trainer Jean-Claude Rouget has nominated the Champion Stakes at Ascot (before the Baaeed news) for a possible recovery mission, so long as the ground is suitable.

The handicaps at Leopardstown should produce plenty of winners. I’m A Gambler (105) led home a one-two for the British raiders in the Sovereign Handicap, enjoying just enough of a lead to hold on from the fast-finishing Safe Voyage (105). The pair posted closing sectionals of 39.18secs and 38.04secs respectively.

I also made a note of Emporio (103) who stopped the clock at 38.69secs after taking the more competitive route of challenging amongst horses. Considered good enough to contest the Irish 2000 Guineas, it would be a surprise not to see his connections exploit his current handicap rating.

Moracana (96) made it three wins from three visits to Leopardstown in the concluding handicap with her closing sectional of 40.20secs the slowest of the day.

Looking to their future engagements, either on the level or over hurdles, I made a note of Jesse Evans (94), My Mate Mozzie (94+) and One Cool Poet (91+).

PEARLS Galore (125) dominated the Matron Stakes in the hands of Billy Lee, turning around Deauville form with Saffron Beach (121) in first-time cheekpieces.

The first two home occupied the first two places throughout the Group 1 contest with the winner’s three-length winning margin carved out courtesy of a closing three-furlong sectional of 38.38secs. Paddy Twomey’s mare now boasts form figures of 3211 at the Dublin track.

The daughter of Invincible Spirit will likely head to ParisLongchamp for the Prix de la Foret in which she was second to the impressive Space Blues, who clocked the most impressive finishing sectional of the weekend, last season.

The logical next target for Saffron Beach would be the Sun Chariot Stakes which she won last season. Jane Chapple-Hyam’s filly has form figures of 11221 on the Rowley Mile at Newmarket.

The disappointment of the race was brilliant Irish 1000 Guineas winner Homeless Songs (118), who eventually faded in to fourth. Even accepting Dermot Weld’s pre-race warning about race fitness, the Frankel filly now has it all to prove and she may take on Saffron Beach again in the Sun Chariot Stakes.

Chris Hayes conjured a finishing effort of 38.00secs from the son of Lope De Vega which was only bettered by opening race winner Zarinsk (100) who was advantaged by the ground being fresh and racing against a much slower early gallop. Ger Lyons’ filly clocked 37.89secs for the same distance of ground.

The fourth Perotan (109+) finished with purpose, stopping the clock at 37.75secs, and looks open to further improvement, while the softer ground saw Beamish (112) return to form for Paddy Twomey.

There was little to separate Auguste Rodin (110+) and Jadoomi (119+) when analysing the overall race times although through the prism of the closing sectionals Simon & Ed Crisford’s four-year-old proved the quicker.

Christophe Soumillon controlled the race from the end of the back straight edging to the rail before asking his mount for maximum effort early in the home straight.

The son of Holy Roman Emperor stopped the clock for his sectional at 38.02secs and was at his most impressive through the final furlong. A close inspection of his form shows him to be unbeaten when encountering ground with soft or heavy in the description which bodes well for the latter stages of the turf season.

Auguste Rodin posted a finishing effort of 39.85secs to win the Group 2 Champions Juvenile Stakes, giving the impression he was only doing what was required to stay in front. The son of Deep Impact holds entries in all the top two-year-old races and Aidan O’Brien spoke in glowing terms about his potential.

Caroline Street (106+) was quicker through the final three furlongs, clocking 39.56secs for her closing sectional and the daughter of No Nay Never holds an entry in the Fillies’ Mile at Newmarket. 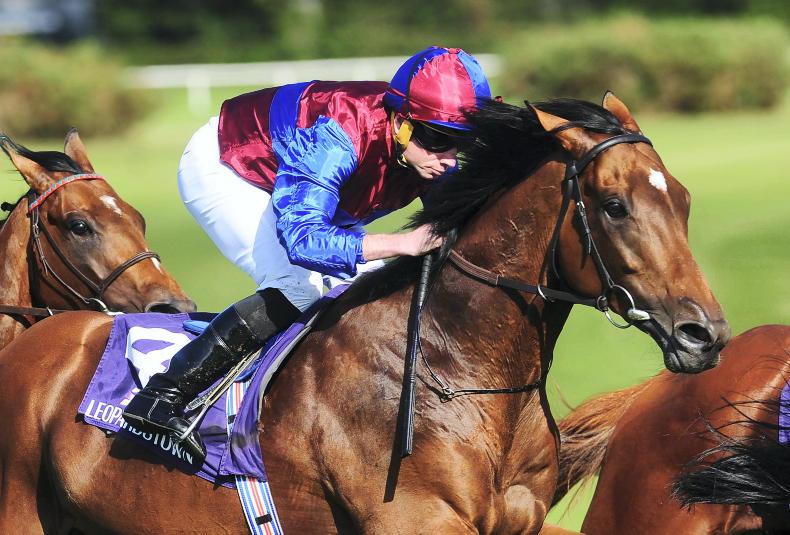 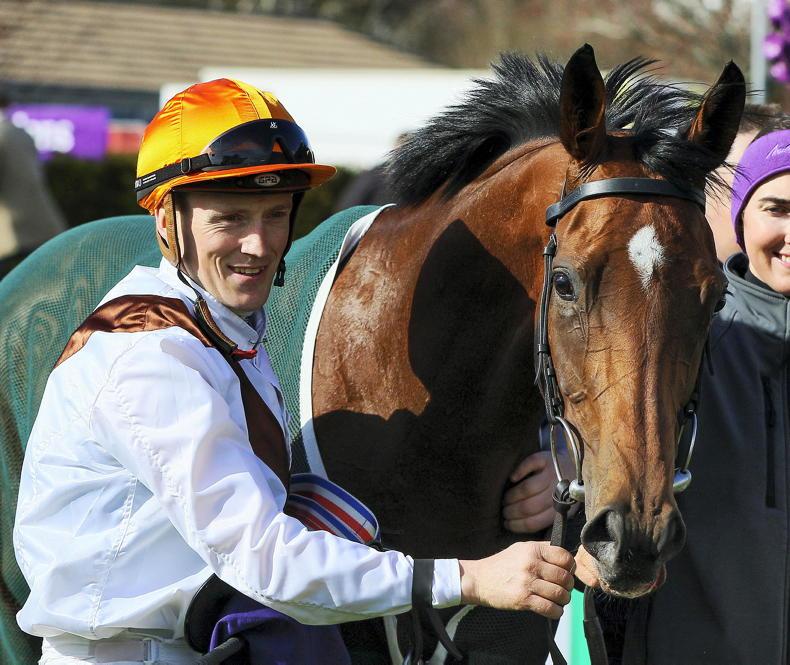 Irish Field Contributor
VIDEO: Pearls Galore goes one better in Matron Stakes
Second in the race last year, the Paddy Twomey-trained mare made all under Billy Lee to win the Group 1 event at Leopardstown