Title: TIME WILL TELL: Sheishybrid has plenty of power 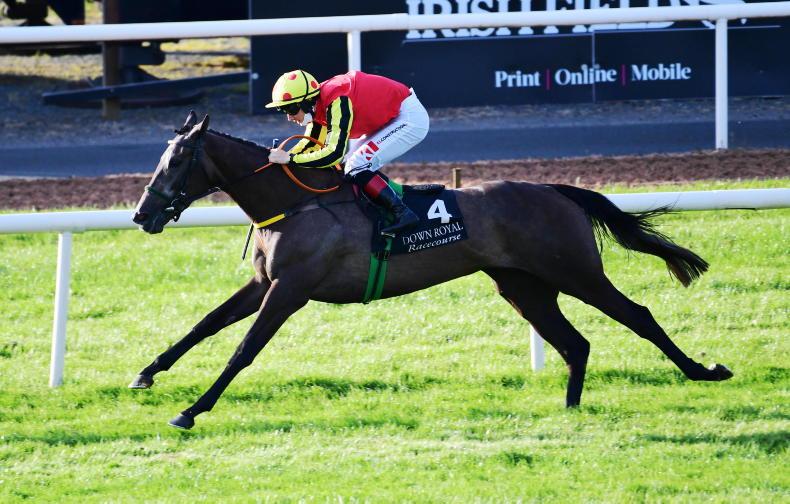 SHEISHYBRID (90) headlined a notable double on the level for Noel Meade at Down Royal last Friday week, running out a comfortable winner of the feature race the Ulster Cesarewitch, in a time figure which demonstrates she is firmly on the upgrade.

The four-year-old filly has improved over hurdles for the application of a tongue tie and, with the aid fitted for the first time on the flat, she was a length-and-a-quarter too strong for veteran Peregrine Run (88) in the fastest time of the evening.

Colin Keane looked eager to lead and employ the enterprising tactics which have served the daughter of Mastercraftsman well over obstacles, although with Yenillik taking a strong hold the champion jockey wisely dropped in behind the 40/1 outsider.

The partnership was back in front again passing the three-furlong marker and on their way to an impressive closing sectional, given the strong gallop.

In covering the ground from the path in 25.87secs the 5/2 favourite was always holding Peter Fahey’s runner-up.

Admittedly, Sign From Above (85+) was marginally faster, stopping the clock at 25.77secs although his victory was achieved in a much slower time when adjusted for distance.

To complete the comparison of the middle-distance races, Blackcastle Storm (81) finished his race of in 26.35secs after making all the running.

Noel Meade will no doubt have a mixed campaign in mind for his filly and she looks to have scope to improve over extreme distances on the flat as well as being likely to stay further over hurdles.

Rich Belief (81) put his disappointing Killarney showing behind him and will be worthy of consideration for his next assignment over obstacles.

Karl Thornton’s gelding did not give Billy Lee an easy time through the early stages of the race although still found enough in the closing stages to post 26.34secs for his sectional.

Sign From Above looked to have plenty in hand at the finish when successful on stable debut for the in-form Peter Fahey and I would expect the four-year-old to be competitive up in grade.

The late closer behind Blackcastle Storm was Action Motion (77+) who, on just his second run after being gelded, clocked a respectable 26.29secs for his closing sectional.

Best of the winners

There was nothing to separate the opening races over the minimum distance on the overall race time, although the closing sectionals point to Ocean Jewel (86+) being the best of the winners.

On just her second start, the daughter of Sioux Nation travelled notably strongly for Billy Lee before surging clear to win easily.

The clock shows the finishing effort to be of a high standard as she covered the ground from the path in 24.23secs. In comparison, the year older Sceolan (78) stopped the clock at 24.62secs, having been ridden more forcefully.

The overall race time picture was similar over seven furlongs and there was also nothing to choose between Panic Alarm (84) and Pub Talk (84) through the closing stages.

The relevant data being 25.49secs for Jessica Harrington’s winner and 25.58secs for Noel Meade’s nursery winner.

If there was an eyecatcher in the seven-furlong contests it was Distillate (83+) who, despite breaking from a wide draw, challenged on the inside rail, posting 25.26secs for his closing sectional.