Title: VIDEO: Aye gets it Right in Rehearsal Chase 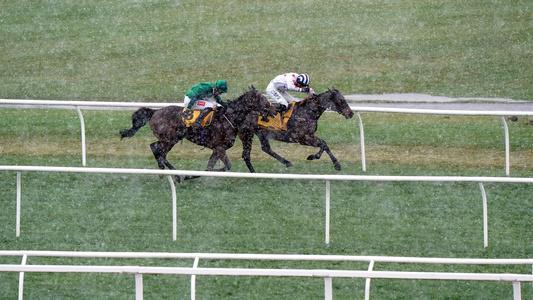 Aye Right claimed the big-race victory he has long promised in a thrilling renewal of the Betfair Exchange Rehearsal Handicap Chase at Newcastle on Saturday.

What a performance! Aye Right holds off Good Boy Bobby in the Listed @BetfairExchange Rehearsal Chase at @NewcastleRaces for Callum Bewley and @HarrietGraham1! pic.twitter.com/A8PeQuvVcb

One of just a handful of horses trained by Harriet Graham, who is also clerk of the course at Hamilton, the eight-year-old has flown the flag admirably for his small yard over the years.

As well as winning on seven previous occasions, Aye Right was last season placed in the Charlie Hall Chase at Wetherby, the Ladbrokes Trophy at Newbury and at the Cheltenham Festival, so few will begrudge him his day in the sun – or snow, as was the case at Gosforth Park.

Down the field over an inadequate trip at Kelso on his return to action at Kelso last month, the eight-year-old appeared far more at home stepping back up in distance.

Always to the fore in the hands of Callum Bewley, 5/1 chance Aye Right fenced fluently to ensure many of his rivals were under pressure a long way from home.

Graham said: “It wasn’t the easiest trip to get here. We left early and we needed all the time we had. It was an excellent result in a snowstorm, but who cares?

“He deserved to be in front this time, he really did. Callum rode him brilliantly and thanks to the owners and everybody involved – it’s just brilliant. I’m really made up.”

Graham is in no rush to decide whether to run her stable star in the Aintree Grand National.

“We need to discuss it with the owners,” she added. “We’ve got the Sky Bet Chase at Doncaster on our radar – he was second in that last season. He’ll possibly go there, but let’s see how he is.”