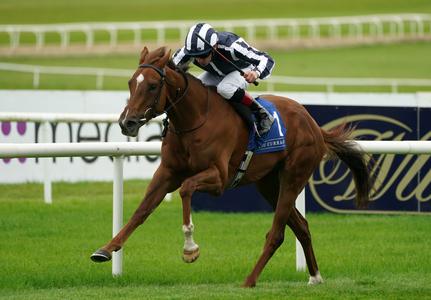 Basil Martini is a maiden no more after claiming a first career win in the Group 3 Weld Park Stakes at the Curragh on Sunday.

Basil Martini is all heart in the Group 3 Weld Park Stakes, finding plenty on the front end to make all of the running in the hands of @declanmcdonogh for trainer @JosephOBrien2 ?? pic.twitter.com/D7UF1pfvMB

The two-year-old had run four times prior to this contest, coming home the runner up on three of those starts as a win proved just out of reach.

This time around the filly was not going to be beaten, however, defying odds of 12/1 when holding off all nine rivals with a tough half-length victory for Joseph O’Brien and Declan McDonogh.

“Declan said she really felt good today. She generally is quick away and leads,” the trainer said.

“It was a really tough performance. She’s a progressive filly and has held her form very well all the way through.

“For the last furlong and a half you were wondering what was going to come and get her, but she just kept finding.

“I’d say that is probably it for this season. She is a group winner now and is a nice filly to look forward to next spring.”

Aidan O’Brien’s Espionage was a smart winner of the Williamhill.ie Irish EBF Maiden, following up a second-placed run at Galway last time with a length-and-three-quarter victory as the 9/4 favourite.

“He ran well the last day. The other horse got up the rail and he had to come around. I’m delighted with him over seven furlongs,” O’Brien said.

“Ryan (Moore, jockey) said he’s babyish. When he got to the start he was a little bit anxious.

“He might go for something like the Killavullan or the Eyrefield at Leopardstown. We won’t force him, he looks a middle-distance horse for next year.”

Joseph Murphy’s Lord Massusus then took the Irish EBF Auction Series Race at 9/4 under Gary Carroll, reverting to six furlongs after running over a mile on his last start.

“We thought it was a bit short for him but it was a very good performance. That qualifies him for the Final in Naas,” Murphy said.

“It takes a good horse to be able to drop back to six like that. They went a good gallop and he picked up well. He’s a tough, straight-forward horse.”

Jessica Harrington’s Starry Heavens was a convincing winner of the Irish EBF Median Sires Series Maiden at 4/1 under Shane Foley, making all of the running and never looking troubled by any of her 13 rivals throughout the one-mile trip.

“It’s the first time we have managed to get her out and get to the front. She loves it,” the trainer said.

“She is out of a sister to Alpha (Centauri) and enjoyed the mile.

“She goes on the easier ground. We might try to get a bit of black type with her and she will be a nice filly for next year.”