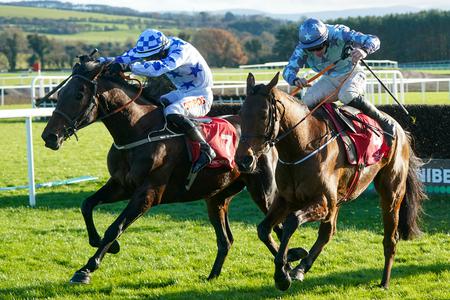 Although a capable performer at her best, the eight-year-old mare was below par when last seen at Limerick and as a result was a 20/1 shot for this Grade Two assignment over an extended two and a quarter miles.

But she answered every call in front for Danny Mullins, and while hard pushed by Minella Crooner refused to buckle and won the day by a head, in a race that was reduced in terms of a jumping test with the fences down the back taken out due to low sun.

“That’s mighty, it’s the best win she’s ever had. We knew that she was in great form,” said Murphy, who also owns and bred the winner.

“She has to be out in front, if she’s in behind she doesn’t want to know anything about it.

“I’ve been milking cows all my life and I’ve always had a love for horses. Since I was a child I loved horses and I’m lucky to have a good mare like her.

"I’ve been milking cows all my life and I’ve always had a love for horses. I’m lucky to have a good mare like her." Bob Murphy, trainer, owner and breeder of Grade 2 winner Darrens Hope at #Punchestown https://t.co/93WUKjiiqh pic.twitter.com/0IgOoWmuzB

“Her mother was a great mare, but she’s every bit as good as her and I’m wicked lucky to have her.

“It was great to be able to come up today and run in a Grade 2, for me to breed her and train her at home. I ride her out every morning.

The winner holds an entry in the Troytown at Navan next weekend, and Murphy added: “We don’t know if she’ll run. We’ll see how she is after this.”

The disappointment was favourite Idas Boy, who was pulled up some way out.