Title: VIDEO: It's For Me new favourite for Cheltenham Bumper

Shanbally Kid, Path D'Oroux and Mahler Mission were other notable winners on the Saturday card at Navan 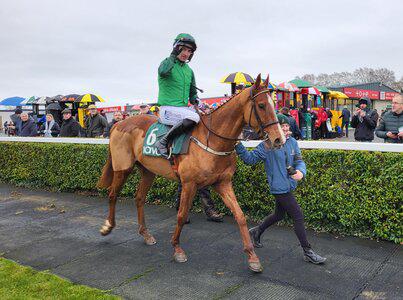 It’s For Me shot to the head of the betting for the Champion Bumper at Cheltenham with an impressive victory at Navan on Saturday.

Easy as you like for It's For Me who canters to a facile victory in the Racing Again February 12th (Pro/Am) INH Flat Race, winning comfortably under a motionless Patrick Mullins for trainer @WillieMullinsNH ?? pic.twitter.com/oKRV2dmxLq

Making his debut for trainer Willie Mullins, It’s For Me was sent off the 4/9 favourite for the Racing Again February 12th (Pro/Am) INH Flat Race after winning his only point-to-point start last year.

Ridden by the handler’s son Patrick, the five-year-old travelled supremely well throughout and was cantering in behind before taking control around two furlongs out.

Mullins only had to push him out to come home 10 lengths clear of Suttons Hill and one firm installed him as the 5/1 favourite for the Cheltenham bumper, before cutting him to 4s.

Patrick Mullins said: “He’s much better on the track than he is at home, at home he doesn’t flash.

“Looking at the price he went off in his point-to-point, it was obviously a similar story there. He’s much better on grass.

“That was very impressive. He was a bit keen all the way but he quickened up very well.

“That was as good as anything that has been seen this year.

“When you don’t have one of Gordon Elliott’s in there to maybe have a measure, it’s a bit easier.

“The bumper horses seem to be hitting top gear now, they were a bit hit and miss before Christmas.”

When asked if the Champion Bumper was tomorrow, would he ride him, Mullins added: “I don’t know what I’m going to ride there.”

The Closutton team had earlier been on the mark with Shanbally Kid (11/10 favourite) in the Buy Your Navan 2023 Membership Maiden Hurdle.

Shanbally Kid (11-10f) needed some encouragement from @PTownend, but he winged the last to nicely win the 2m4f maiden hurdle @NavanRacecourse on his second start for @WillieMullinsNH?? pic.twitter.com/d0DPSBXv3b

He let down his supporters when only fourth on his hurdles bow but made amends with a length-and-three-quarter verdict over Monty’s Star in the hands of Paul Townend.

“It took me a while to get him jumping to be honest,” said the winning rider.

“I was probably there a bit soon on him as he didn’t do a whole lot when he hit the front, but I was always holding them behind me.

“He’s still quite a raw individual. I kind of settled the race really quickly and then he was just doing enough. I’d say there is a bit more in the tank.

“The further he went, the better he jumped, he’ll be fine and should progress again. You’d be going out in trip with him rather than back, I’d think.”

Gavin Cromwell and Keith Donoghue were also in double form via Path D’Oroux and Pure Sirloin.

Path D’Oroux (3/1) ran out a cosy winner of the Welcome Back To Navan Racecourse Rated Novice Hurdle, in which three of the key players failed to finish.

“I know there were fallers but he won the race in a nice manner,” said Cromwell.

“He travels lovely every day, even in the Royal Bond he travelled very well but he cut out in a matter of 50 yards.

“He ran a lot better in Leopardstown the last day and hopefully he’s on the way back.

“The ground is no bother to him as he’s a big strong horse and he has plenty of gears too.

“I suppose the owners would like to go to Cheltenham for something, so we might look at one of the handicaps.”

Pure Sirloin (7/1) has less lofty targets after his win in the Ardmulchan Handicap Hurdle.

Cromwell added: “He would want to learn to jump better but he was good over the last two which got him out of jail.”

“He made plenty of mistakes and Keith gave him a smashing ride to land him there. He’s a work in progress and we’ll look for something similar again.”

Mahler Mission (100/30) was cut from 33/1 to 12s by one firm for the National Hunt Chase at Cheltenham after coasting home by 10 lengths in the Wilkinstown Beginners Chase.

Winning trainer John McConnell said: “We put him in the National Hunt Chase at Cheltenham this week and we’ll certainly look at it, you wouldn’t be averse to going after that.

“He’s going to get a big enough mark, so we’re going to be restricted where we can go but in a good way.

“I was bottling it last night, thinking of taking him out, and looking at other alternatives. There is nothing in Ireland though bar a couple of Grade 2s. We could do that or could go straight to Cheltenham.

“All the big handicap chases are on the agenda as well, there are a lot in the UK worth a lot of money. There are loads of options with him, he’s only a young horse.” 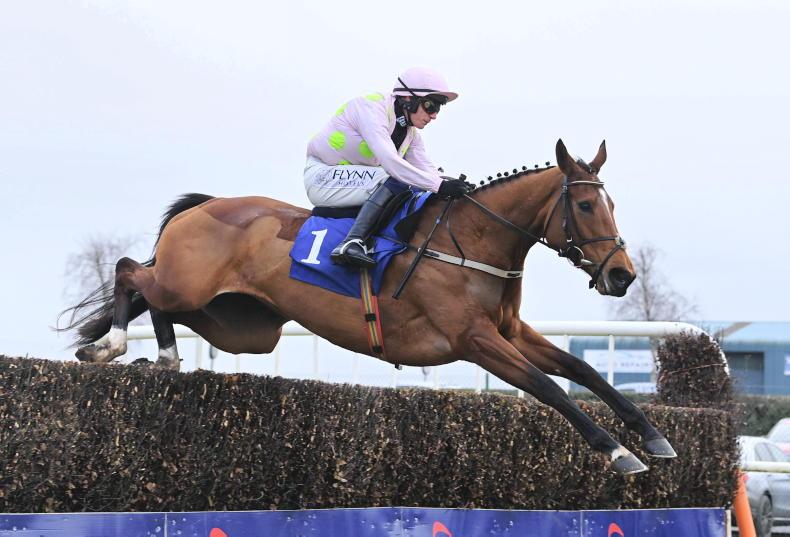 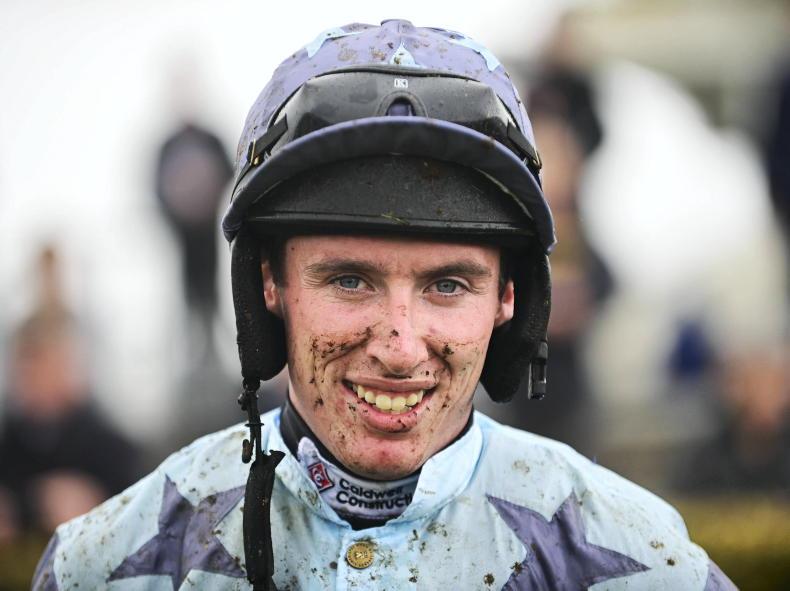 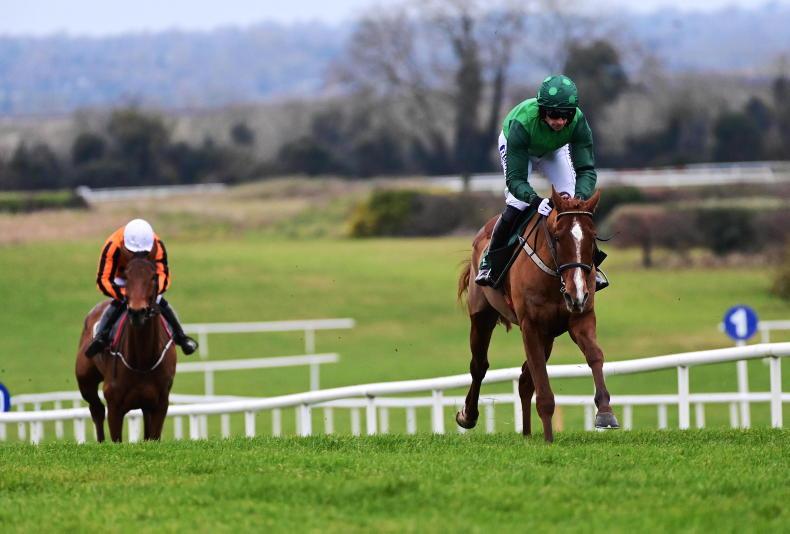 Leo Powell
BREEDING INSIGHTS: Little-known sire set for the big time
Leo Powell writes about a little-known French stallion who could be set for stardom 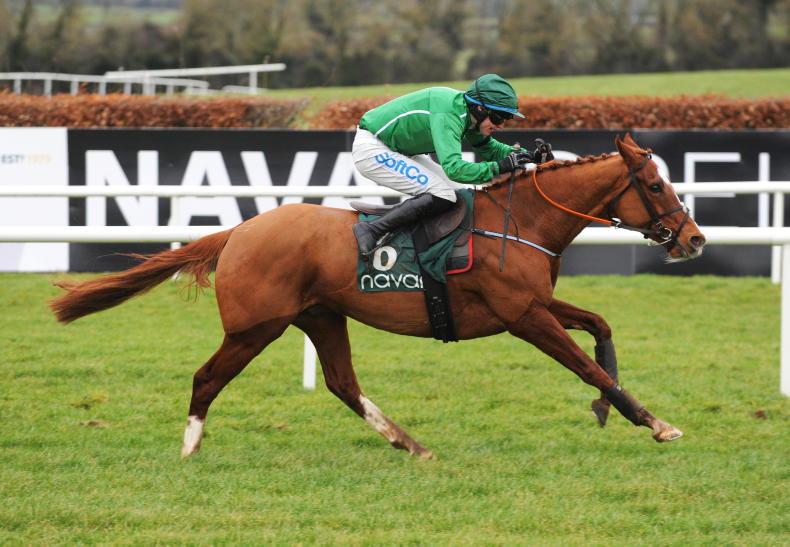 Gary Carson
NAVAN SUNDAY: HMS Seahorse has Coral Cup on the horizon
Paul Nolan's gelding won well while Willie Mullins and Gavin Cromwell both had a double on the card