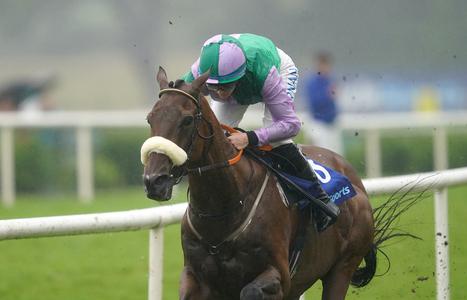 Rachael Blackmore teamed up with her old mentor John ‘Shark’ Hanlon to land the valuable BoyleSports Handicap Hurdle aboard Hallowed Star on the penultimate day of the Galway Festival.

A dream week for @jhanlonracing continues as Hallowed Star comes through to win the @BoyleSports Handicap Hurdle ??#GiddyForGalway | #EveryRacingMoment ??pic.twitter.com/f8nEMeuf05

Hanlon is widely credited as the man who set Blackmore on the path to stardom and she repaid the County Carlow handler in spades by steering the seven-year-old to an impressive 17-length success to scoop the €64,900 first-prize.

Ridden prominently by the Gold Cup-winning jockey, Hallowed Star pulled clear on the climb to the straight and survived a mistake at the second last to record an unchallenged victory at 8/1.

Bigger and better things surely await the winner, who scored in the manner of a graded performer, but for now Hanlon was willing to simply just soak in his second big winner of the week following Hewick’s triumph in Wednesday’s Galway Plate.

“Rachael was super and the horse was super. He was keen in her hands and she had the brains to let him roll on. When you are up there you are out of trouble,” said Hanlon.

The @Galway_Races Plate on Wednesday ?

“She was very good on him, as she is on them all. She rode one of her first winners here for the Mees (owners) on Camlann so it’s great to have her back in the colours and get another winner for them.

“For me it’s some week to win two feature races in Galway. We have only a small team of horses and to have two features going home is unbelievable.”

He went on: “I have to thank the staff at home and Rachel, my partner. Without them I’d be no-one and it’s the same with every trainer, without the staff they are no-one.

“It’s a tough time with staff, expensive times. For any small trainers out there I’d say keep at it because you’ll get there.

“This means so much to everyone that is involved in horses. It’s a tough time on owners as well because everything has gone so expensive.

“It’s a good crowd today and the other day they were five deep all around when Hewick won. It’s unreal and when they see a small trainer winning they are always there to support them.”

"There was plenty of commotion in behind me,I was at the right side of all that"@Galway_Races #GalwayRaces #GiddyforGalway @HRIRacing #HorseRacing