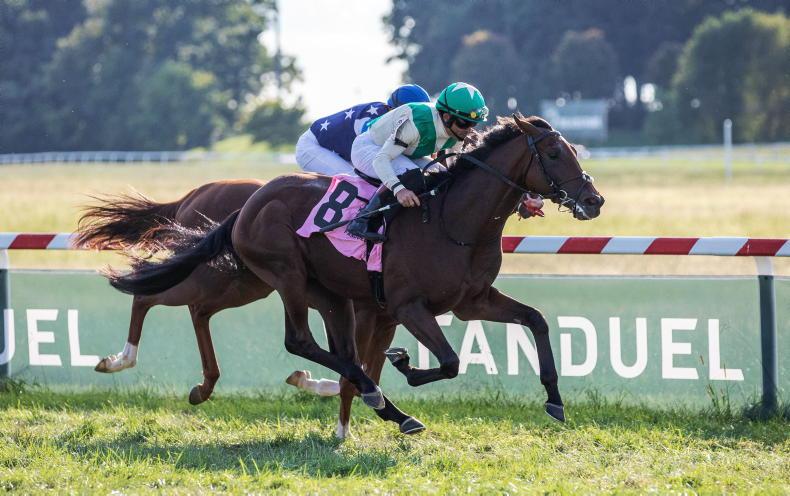 THERE was no luck for any of the Irish-connected horses over the jumps at Aqueduct on Thursday.

The Grade 1 Lonesome Glory Hurdle threw up a shock result when the favourite Snap Decision was beaten by the one-time Donald McCain-trained Noah And The Ark.

Harrison Beswick, who used to ride the horse for McCain, was on board again. The Irish-bred winner is by Vinnie Roe, bred by James Slattery of Milltown Britton Stud in Clonmel.

The eight-year-old won the two-and-a-half-mile contest by nine lengths. Danny Mullins was third on Ask Paddington for Keri Brion while Belfast Banter again proved very disappointing, a long way back in seventh.

Earlier on the card, last year’s top jumps horse, Keri Brion’s The Mean Queen, made her seasonal debut in the William Entenmann Novice Hurdle. The mare led into the straight under Parker Hendricks but she was overhauled just on the line by the Jamie Bargary-ridden Proven Innocent, who won by a head. Danny Mullins finished fourth on Going Country.

It was a quieter weekend last week and the better class action was primarily among the juveniles at Del Mar and the big money meeting in Kentucky Downs.

Joseph O’Brien’s Cadamosto failed to get a run in the turf sprint at the latter venue where the feature Grade 2 Kentucky Turf Cup Stakes went to the Mike Maker-trained Red Knight, the eight-year-old gelding getting the better of Gufo by a nose.

At Del Mar in the Grade 2 John C. Mabee Stakes, Irish-bred Going Global found French-bred Avenue De France too good, going down by half a length to the Leonard Powell-trained winner.

There were two Grade 1s for juveniles and the TVG Del Mar Debutante Stakes over seven furlongs went to the Peter Miller-trained And Tell Me Nolies, a filly by the late Arrogate.

She got the better of the Bob Baffert-trained favourite Home Cooking by a head.

The colts’ Grade 1, the Runhappy Del Mar Futurity on Monday, also went to an Arrogate. This time it was one from the Baffert barn as odds-on Cave Rock came home over five lengths clear of Havnameltdown.

The Grade 3 Mint Ladies Sprint Stakes, with a $736,030 prize fund over six and a half furlongs, went to Wesley Ward’s Irish-bred daughter of Kodiac, Campanelle winning by a nose on her first run since Royal Ascot.

On Wednesday, at the closing of the Kentucky Downs meeting, Joseph O’Brien enjoyed success with one of the horses that were part of his satellite yard at Saratoga.

Fergus Galvin, Marc Detampel, and Magnolia Racing Syndicate’s Reckoning Force prevailed in the Juvenile Mile, giving O’Brien his first win of 2022 in the US.

Previously third in a Listowel maiden, Reckoning Force is by Air Force Blue and the colt will now join Brendan Walsh’s string in the US.