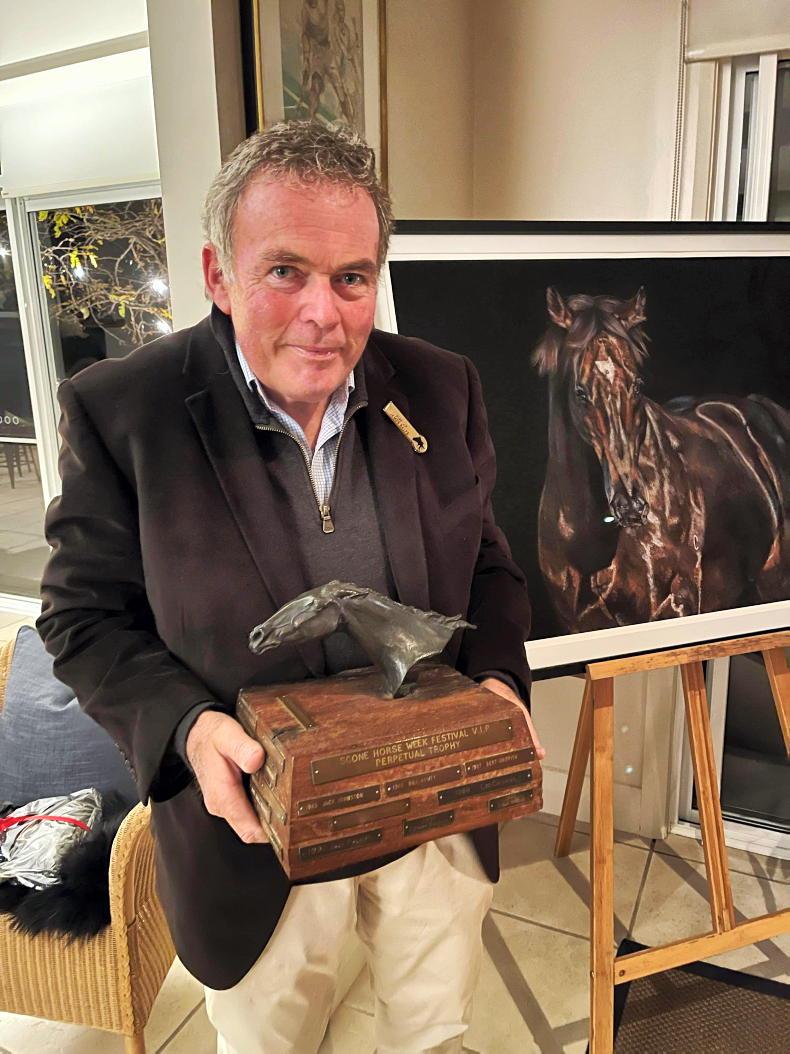 James with his VIP award at the Scone Horse Festival. "I was very humbled to receive the award, knowing many of the previous recipients, who are very highly regarded in the equine industry locally.” \ Magic Lantern Photography 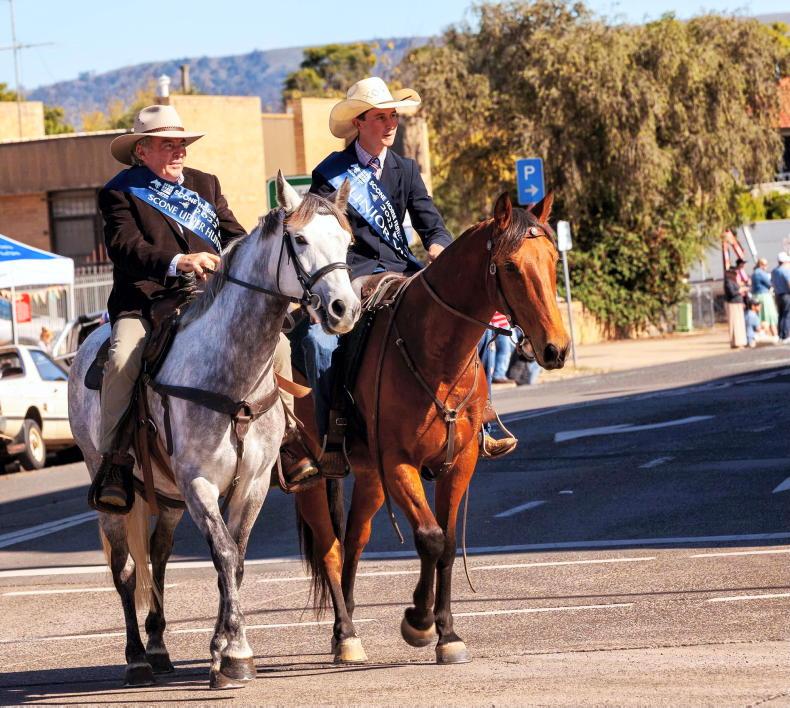 EVERYONE calls me Balfy down here.” Balfy is James Balfe, originally from Claremorris and now settled ‘down here’, which happens to be Scone in New South Wales, Australia.

James was one of many hospitable Aussies who got in touch during the bucket list trip and although our paths didn’t cross during a whirlwind visit to Australia’s horse capital, it’s another small world moment. Garbally College, across the fields at home in Ballinasloe, is where both he and The Irish Field hunting correspondent Noel Mullins were boarders at.

Although his family was not involved with horses, his late father Seán left an inimitable stamp on Mayo life through his work as an architect which brought him as far afield as Iraq and Poland. His Irish legacy includes his involvement in such projects as the Knock Basilica and Ireland West Airport.

“I always had a love for horses and rode Connemara ponies when young,” James recalled, mentioning mentors such as George McNabb, Cormac Hanley and Tommy Brennan.

His career choice as a farrier meant first serving his apprenticeship with Stephen Foyle at Coolmore in Fethard and studying with the Worshipful Company of Farriers in Hereford, Irish Master Farriers Association and further afield at the Oklahoma Farrier College in North America.

Like so many of the Hunter Valley ‘Irish Brigade’, James moved there in 1996 to work at Coolmore Australia after their Australian base was set up in Jerrys Plains, New South Wales, less than an hour to Scone.

“Scone is known as the ‘Horse Capital of Australia’ with 75% of Australian thoroughbreds bred in the area and many of the leading studs and stallions are based here.”

And the name, Scone? Like many Australian settlements with ‘old world’ place names, it comes from Scotland where the original town and namesake was the home of Scottish kings and their coronation site.

One familiar-sounding Down Under place name for a Mayo expat is Ballina, where James moved to and trained racehorses for a spell after leaving Coolmore in 2004. Not before he had tried his hand on the rodeo circuit. “While at Coolmore I became involved with the rodeo scene and won a national title in team roping.”

He returned back to Scone seven years later to resume his farriery career and mentor the next generation. Closely involved with the Professional Farriers Association of New South Wales (NSW), he has promoted national and state farrier competitions and judged at several, including Ekka Show in Brisbane and King of the Ranges competition. Closer to home, James has helped organise the Scone Farrier competition held during Scone Horse Festival week.

“Every year in May there is a wonderful celebration of the horse – Scone Horse Festival,” he explained, before listing its dizzying variety of equine and social events. Starting with “show jumping, tentpegging, polo, polocrosse, senior and junior rodeos, an equine extravaganza, local school fete and markets, yarns night, Hunter Thoroughbred Breeders Awards evening, trivia night, golf day, picnic by the lake with fireworks and a two-day race meeting, featuring six stakes races and $2 million in prize money with many of the country’s leading stables represented.”

And that’s not all. The proverbial icing on the scone at this year’s festival was the selection of James as its VIP.

“Each year, the Festival committee choose one person who is prominent in the equine industry locally to be the VIP. Much to my surprise, I was chosen this year. I received the award at a cocktail evening hosted by Arrowfield Stud, one of the main sponsors for the Scone Horse Festival.

“I was very humbled to receive the award, knowing many of the previous recipients, who are very highly regarded in the equine industry locally.”

A glowing citation at the event underlined his unsung contribution to the Hunter Valley horse world, including helping out at the local Scone Showjumping Club training and competition days, seeking sponsorship, setting up jumps and announcing on the day.

“Balfy is a very good announcer and is called on at many events to jump in and assist. His knowledge of the particular event and participants and his quick wit, whether it be for a showjumping, Connemara or farrier event, always make it enjoyable and informative and humorous!”

He was also praised for his mentor role to young farriers and organising the well-received ANZAC gathering two years ago during the first Covid-19 lockdown in Australia to celebrate Australian spirit in adversity.

Another gathering James is involved with is Aonach, the Connemara Pony Breeders’ Society of Australia’s annual get-together in Wagga Wagga, held each March.

“I’ve always loved the Connemara pony so when a quality stallion and mares came up for sale from a prominent Australian breeder, my partner Sarah and I decided to purchase them. The stallion was Castle Baron, imported by Sue Clarke of Glenormiston Stud and he was purchased in partnership with Lisa Randle of Asham Connemaras, but unfortunately he died from a snake bite.”

Castle Baron, foaled in 1997, was bred in Clifden by Henry O’Toole and sold to Sue Clarke as a two-year-old. By Abbeyleix Owen out of Castle Dame (Mervyn Kingsmill), the bay was a full brother to Dublin, HOYS and Olympia winner Castle Comet and the Clifden supreme champions Castle Countess and Castle Urchin.

‘Henry’, as the stallion was known, is still represented in the Killeenfarna Connemaras, bred by James and Sarah Wills. In fact, the Class 1 Connemara mare - Killeenfarna Mise Ava (Glenorminston Bart x Glenormiston Rosalie) - that James led the Scone parade on - is a Castle Baron great-granddaughter.

“The ponies are a taste of Ireland in Australia. We enjoy getting them out and about, eventing is very popular over here so they are our main competitions.”

Farrier, Connemara breeder and just a super Jack of all trades, the Mayo expat was best summed up with these words at his award presentation: “Balfy is a wonderfully good-humoured person with a quick wit and a kind heart. He connects with everyone he comes into contact with.”