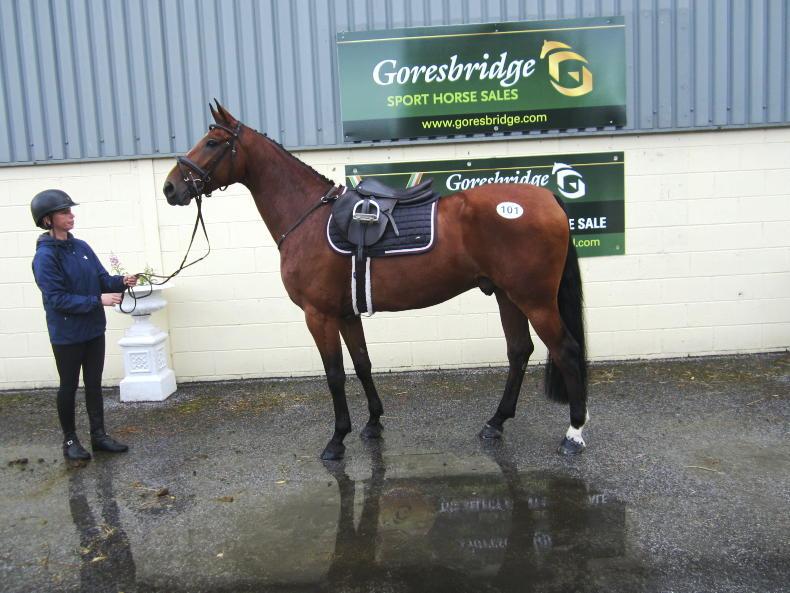 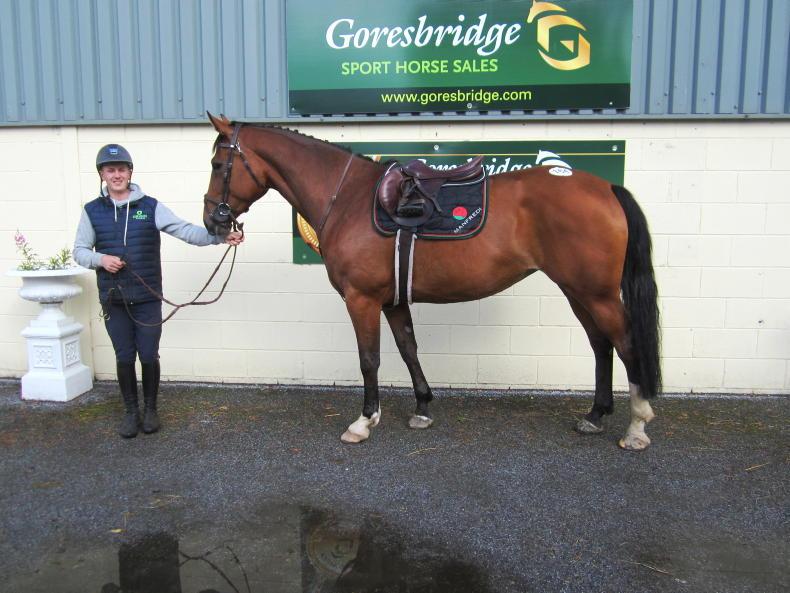 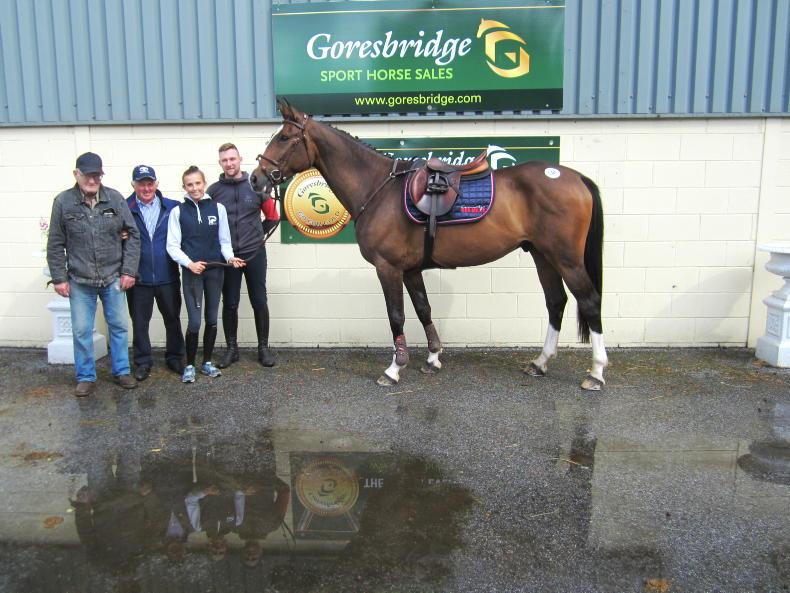 Deards Flashdance (Lot 146) was sold for €18,000 at the Goresbridge September Sales \ Sally Parkyn 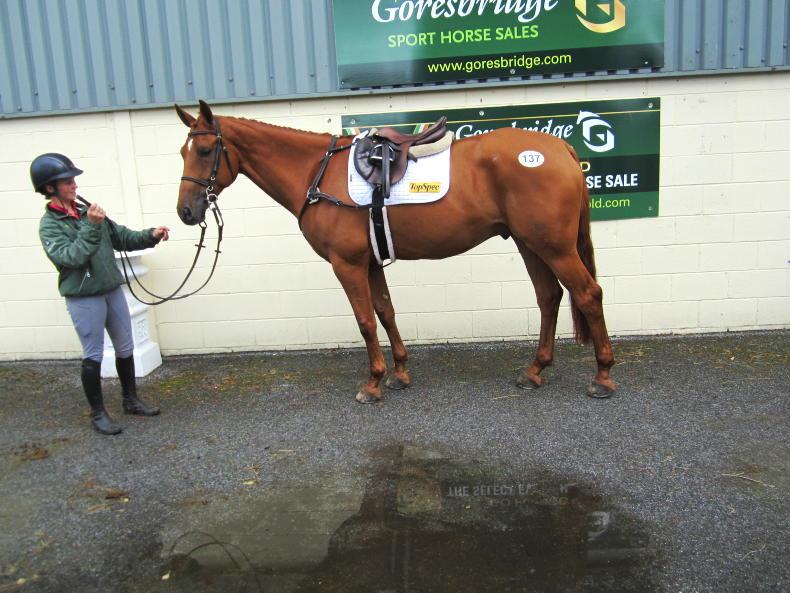 Jessica Finnegan’s Mr Quality Cruz (Lot 137) was sold to the UK for €15,400 at the Goresbridge September Sales \ Sally Parkyn 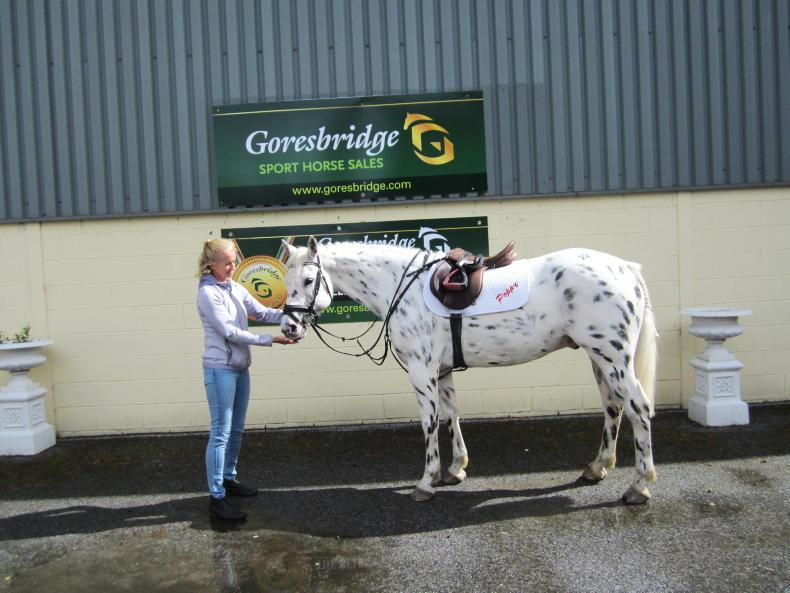 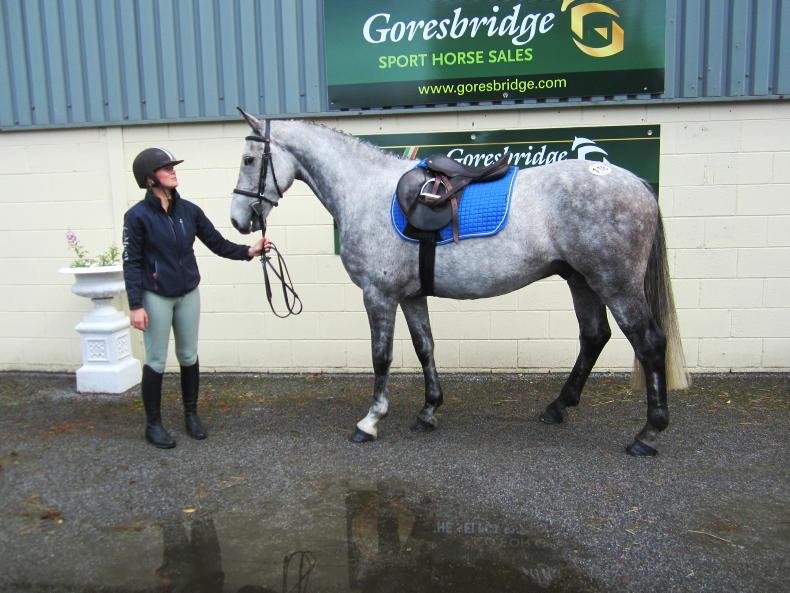 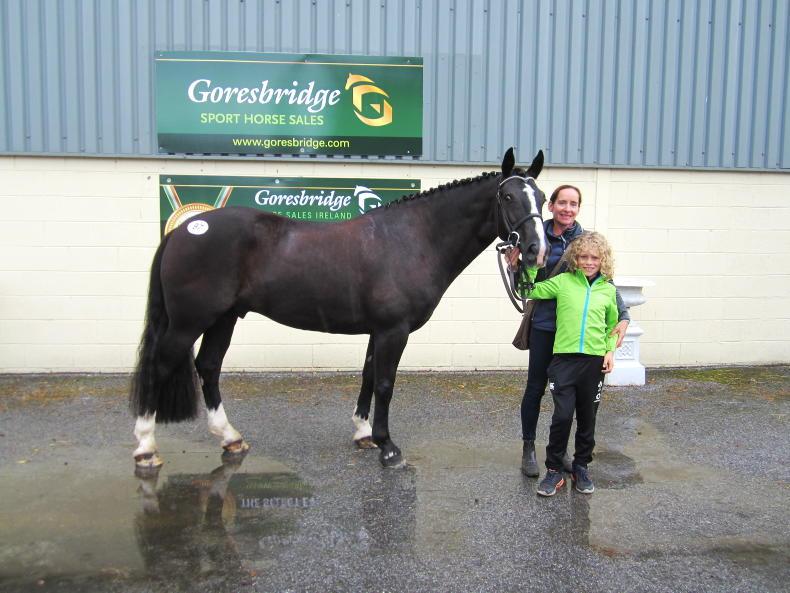 The highest priced cob sold at Goresbridge was Finbar Fury (Lot 97) for €10,000 \ Sally Parkyn
Previous Next

DESPITE the general economic uncertainty, there was no shortage of confidence at Goresbridge earlier this week, where the opening two days produced some outstanding trade.

The demand for both the ponies and the older stock was solid throughout, and as a result the averages rose for the seventh year in succession.

Aided by some very lively online activity, the top prices also hiked considerably, to feature two lots at €24,000 and €23,000 while a further 12 made in excess of five figures. “Trade has seen a meteoric rise in recent years and it’s very satisfying to see that demand is holding strong,” stated Mary Frances Donohoe.

“It is especially satisfying to see so many vendors rewarded, with so many lots making in excess of five figures, which is testament to the calibre of horse they are entrusting us with.”

A well related individual, he is a home-bred half-brother to the American-based event horse Drombane Dynamite and, very well produced by rider Gemma Phelan, he was secured in house by Highcross Horseboxes Ltd.

“I’m delighted for Michael who has done everything right by this horse,” said Phelan afterwards. “He’s fed him well, given him time and has now been well rewarded.”

The Thurles-based breeder was equally pleased, and more so by the knowledge that this son of Future Trend (dam by VDL Arkansas) will now have every chance of success with new rider, the British international Emma Hyslop-Webb.

Having just competed at Burghley, Hyslop-Webb was restocking and commented: “He’s a nice model, with a super jump. I had a quick sit on him before he went through, and he felt good.”

It was most satisfying to see breeders doing well, and later in the afternoon, Hugh Fitzpatrick’s jumping mare Erne Blaze Away (Lot 164) by Air Jordan Z changed hands for €23,000.

The seven-year-old winner of 49 SJI points was the subject of another lengthy exchange, which eventually saw the hammer fall in favour of Keith Donovan from Borrisokane. Donovan was accompanied by his show jumping wife Magda, who initially plans to compete in the amateur ranks.

This was a good result for Cavan-based Fitzpatrick who not only bred this mare, but her Grade A jumping dam and also grandam. Well ridden by Jonathan Smyth, whose father Richard had competed the dam, this was a reluctant sale by the vendor, who explained afterwards: “I just have too many horses at home and I have to cut down – there is no other reason.”

Dennis O’Riordan from Sixmilebridge in Co Cork had enjoyed a good day selling ponies on Wednesday, and returned to the fray to score again when his Deards Flashdance (Lot 146) was knocked down for €18,000.

Sourced as an unbroken three-year-old, and broken by Oliver Harker, this son of Quite Capitol had been produced throughout by Quinn McElhinny and Lara Bloor, and was according to the vendor. “The first foreign horse I have owned, and one of the nicest.”

Co Offaly buyer Phil O’Reilly/J.Craig signed the docket for this five-year-old who will now be heading for the event track with his daughter Lauryn. Deards Flashdance (Lot 146) was sold for €18,000 at the Goresbridge September Sales \ Sally Parkyn

As one of the most experienced event horses in the catalogue, Jessica Finnegan’s CCI2* gelding (Lot 137) Mr Quality Cruz (OBOS Quality out of Miss Carnival Cruise) was also one of the stand outs. Carrying a good record in all phases, and a result list which included five, top eight placings, the seven-year-old was the subject of a very competitive tussle.

Bids bounced rapidly between several online buyers, before he was finally secured by Scottish event rider Kirsty Hogg at €15,400. A home-bred, who had been campaigned by both Emma Jackson and Daniel Alderson, he was described by his owner as having “given us some great days out, and now it’s someone else’s turn.”

The trade was a difficult one for the commercial buyers, so Jim Derwin did well to account for Birr Equestrian’s Fortal Kingsborough (Lot 118) a gelding by Cobra (dam by Carrickrock Close Shave) at €11,400. Sourced through the same sale ring as a three-year-old, and in the same ownership since, the smart grey had both eventing and jumping form.

Selling for the same amount a little later in the proceedings was Dean Wilson’s especially attractive mare Chatsworth Que (Lot 161). A well related nine-year-old bred by John McDonald, she is the winner of 17 SJI points and is a half-sister to the top Grand Prix horse Chatsworth Dan out of a Diamond Serpent mare.

“Someone will get great enjoyment with her,” said Wilson.” We bred a foal (by Lithium) from her during Covid, so she is very low mileage for her age.”

Having been under bidder on one of the top priced lots, Sussex-based trader Ian Smith finally secured this one, commenting afterwards: “I never thought I would be bidding near to €20,000 without getting them!” Jessica Finnegan’s Mr Quality Cruz (Lot 137) was sold to the UK for €15,400 at the Goresbridge September Sales \ Sally Parkyn

Opening the marathon six-day renewal in the best of styles, Wednesday’s session of ponies saw some of the liveliest trade in recent years. With two lots breaking the €10,000 barrier, and with almost half of those that changed hands realising in excess of €5,000, business was buoyant.

As traders battled with the private sector, as well as the internet, there were numerous spirited exchanges, and none more so than for Claire Ryan’s pair of jumping ponies who topped the day at €10,000 apiece.

Bred by Claire’s father Jim, and well ridden by Tom O’Shea, the duo had both clocked up jumping winnings, and were secured within the trade. First up was the striking appaloosa Rulahisu Bingo (Lot 22), a seven-year-old 148cms pony by Josie Jump.

A stand out in the catalogue, Rulahisu Bingo had clocked up 164 SJI points, and carrying the valuable ‘quiet to ride’ warranty, he was eventually secured by Co Sligo trader Tiernan Grey.

This was a good result for the Ryan family, whose day improved yet again, when another home-bred, Rulahisu Twinnie (Lot 54) changed hands for the same amount. Similarly warranted, and the winner of 106 SJI points, this one was out of a Diamond Mine dam.

An online customer seemed to be determined to secure this one, but after a protracted tussle he was snapped up by Ballinasloe dealer Niall Daly.

“It’s rather sad to sell them, but we have been breeding for years, and just have too many,” explained Claire Ryan, who is based in Kilcrene just outside Kilkenny City. One of the earlier lots to make an impact was Joan Browne’s Bubba Benson (Lot 15), an eye-catching four-year-old with light competition form. Ridden on the day by Martin Curran, whose 13-year-old daughter Hannah had produced him since early last year, this smart chesnut had hunted and competed in training shows and looked well bought at €9,600.

He had been well marketed prior to sale, so it came as no surprise to see online bids having an influence. In the end however, the hammer fell in favour of local man Simon Brown who, from nearby Graiguenamanagh, was buying for his daughter Rachel.

“I haven’t even brought the box with me,” he said afterwards. “I just thought he was a nice pony with great quality, and one that moved and jumped.”