Adding this Group 1 prize to her prior Group 3 and Group 2 wins, the Patrick Prendergast-trained filly got a post-race quote of 20/1 for next year's Qipco 1000 Guineas 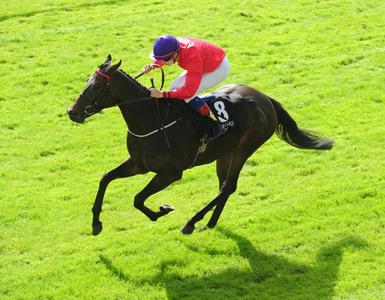 SKITTER Scatter continued her rise through the ranks with a clear-cut success in the Group 1 Moyglare Stud Stakes at the Curragh.

It was a dream result for trainer Patrick Prendergast and jockey Ronan Whelan, and by far the biggest success of both of their careers.

However, victory looked some way off two furlongs out as Skitter Scatter did not pick up immediately and Lady Kaya cruised up alongside the pace-setting Main Edition.

When Lady Kaya hit the front she looked set for victory, but, as her stamina began to ebb away, Skitter Scatter clicked into overdrive and ended up running out a convincing two-length winner.

Prendergast said: “I’m quite astounded how good she was. I was thinking if she was in the first three it would be a marvellous result and we could head for the Guineas and have a chance of running well in it. Now I’m just starting to think maybe she might win the Guineas!

“I was worried coming into today because I felt it had been a long year for her. When she came we just wanted to win our maiden and sure we tried to win one of the earliest maidens of the year at Dundalk.

“She’s incredible in that she’s kept going and just kept improving. I was also worrying too that just, as of late, she’s just starting to grow, finally, so she’s not going to be so small next year.

“We’re a small yard and all my staff have worked incredibly hard with this filly. They are all involved with her and that’s the beauty of a small yard. I’m only a cog in the wheel, I know it sounds like a cliche, but without those people around me we wouldn’t be here today.

“I said to Ronan going out, because I don’t think Ronan realises how good he is, there were other jockeys looking for the ride on this filly, more and more as the year went on, and I told him going out that there was a reason you are on her because you’re world class, and he is.

“She’s probably one of the best-bred fillies to ever come into my yard and if I’d have my way – it’s what I do and how I earn my living – I would probably have had the money in the back pocket long ago (been sold).

“Mrs (Sonia) Rogers and Anthony (Rogers) said ‘no’, that they wanted to keep racing her, that they were enjoying it and that she was going back to their stud. I’m very very lucky in a lot of ways to be here.”

Whelan said: “We thought she had a right chance, but you are always pinching yourself because you never know what is going to happen in these big races.

“I was a little bit worried when she hit a flat spot, but she came good and when we crossed the line she had plenty left in the tank, She’s won with a bit in hand – she wasn’t stopping.”